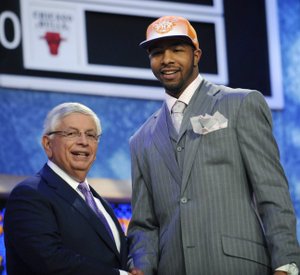 “Marcus’ reaction when Markieff got picked ... I thought that was so cool,” said Self, referring to former KU forward Marcus Morris wiping away tears when his brother, Markieff, was selected No. 13 overall by Phoenix.

It didn’t take long for Markieff to return hugs to his twin, who was taken one pick later — No. 14 by Houston.

“It was great. It was great,” Self added. “It wasn’t an intense table. Angel was certainly relaxed and the twins seemed relaxed. They were happy. I mean they were ecstatic where they ended up.”

Quite a while later, KU freshman Josh Selby, who did not make the trip to Jersey for the draft, was tapped No. 49 overall, by the Memphis Grizzlies.

“We were sitting there talking. I said, ‘If you can go anywhere, where would you want to go?’ Marcus told me, ‘I love Houston,’ and Markieff told me, ‘I love Phoenix,’’’ Self said. “They ended up with the franchise they wanted to be with. I think Marcus hoped he’d go a little bit higher, but I think it turned out great for him.

“And Josh ... even though he didn’t go until the second round, he gets hooked up with a couple Kansas guys in Xavier (Henry) and Shady (Darrell Arthur). I think that will be an up-and-coming team Josh will be able to impact as well.”

Self said he had not heard rumors that there were some concerns about Selby’s recovery from his foot injury at KU.

“I don’t know anything about that,” Self said. “I know we went through it with Shady. He supposedly had a kidney thing and word spread and next thing you know his stock fell (even though there was nothing wrong with him). I don’t know if anything like that was going on with Josh.”

Self said he was a “little surprised” Markieff went ahead of Marcus in the draft.

“I think Marcus was on the board with more people and had a chance to go higher than Markieff, but I think Phoenix was certainly locked in on Kieff.”

Average d-league salary $30k. Josh, you should of listened!

Josh will be fine. He is following his dreams and is going to play basketball for money and that is pretty awesome.

Josh will be fine. He is following his dreams and is going to play basketball for money and that is pretty awesome.

Josh is a hard worker and he will make the Grizzlies this fall. He will proboly make between 300-500 K which is a whole lot more than I make. Not bad for a 19 year old huh. Josh we are proud of you and wish you the best. Way to man up and go to work for your family.

Don't forget all those free uniforms and work out gear. =)