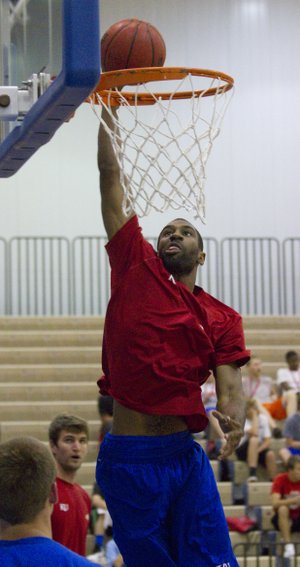 Where do you think the Morris twins and Josh Selby will be drafted? Enter our contest for a chance to win $100 in KU gear.

Kansas University sophomore basketball forward Justin Wesley, who was born and reared in Fort Worth, Texas, rooted for the Dallas Mavericks to win the 2011 NBA championship.

“I am really a Lakers’ fan. Since they beat the Lakers and I like Dirk’s game, I had to go for the Mavs (against Miami in the finals),” Wesley said Monday after participating in drills at Bill Self’s basketball camp in Horejsi Center.

The Dirk Nowitzki-led Mavericks defeated the Heat, 105-95, on Sunday to take the title, four games to two.

“I was never a Mavericks fan. I never liked any Texas teams,” Wesley said. “I was a Kobe fan. Keith was a Lakers’ fan also,” Wesley added of his brother, former KU guard Keith Langford. “Our whole house was a Lakers fan.”

Wesley has been told he resembles his idol — Lakers’ phenom Bryant.

“You know what? I get that a lot. I don’t see it, but everybody else does,” the 6-foot-8, 200-pound Wesley said of friends and strangers alike comparing him facially and physically to the 6-6, 205-pound Bryant. “One time at IHOP (in Texas), somebody came up to me asking for an autograph thinking I was Kobe Bryant.”

Future NBA Hall of Famer Bryant plays on the perimeter. Wesley, who transferred to KU last summer from Lamar University and sat out the 2010-11 season in accordance with NCAA rules, is a somewhat undersized power forward.

“Working with Marcus and Markieff (Morris) was a good experience getting stronger, and I felt those were two of the best big men in the country,” Wesley said. “Thomas (Robinson), too. Working with them made me a lot tougher.

“I am still working on my perimeter skills a little bit,” he added. “We’ll see as time goes on. I’m in the gym working every day.”

Wesley could be counted on for frontcourt depth next season following the departure of seven players, including the Morris twins and forward-guard Mario Little.

“I’m working on my ball-handling skills, my outside jumper and getting stronger so I can contribute any way I can to the team,” Wesley said.

He averaged 1.2 points and 1.3 rebounds while logging 9.9 minutes a game during the 2009-10 season at Lamar. He tallied season-highs in points (eight) and rebounds (eight) against Lyon College. He had four games of 20-plus minutes.

“This summer I am going to work really hard to try to get better and better my skills. If I do get to the point where I can get in the rotation, that’s where I’ll be,” Wesley said.

Wesley’s famous brother, Langford, the No. 7-leading scorer in KU history, has been battling injury and hasn’t been able to play for BC Khimky of Moscow in the Russian League playoffs.

“He had a problem with his knee. He’s sitting out now,” Wesley said of his brother, who recently signed a four-year extension with Khimky, good for $2.3 million a year.

Justin is looking a bit more filled out and mature physically here. It sounds like he has the work ethic he needs and a private scholie from Keith. He has the inches. He just has to decide what he can do on a floor--as Clint said and proved as a film maker--a man's got to know his limitations--and that means knowing the long list of what you often can't do, while focusing in on what you can do--and become monomoniacal about getting better at doing it.

Keith banking six zero money in Russia. Maybe the Cold War was worth it after all! Go, Keith, go!!!!

Maybe the cold war was worth it after all? How could anyone say anything so stupid? The validity of everything else in the comment just gets swallowed up in the ignorance...

Oh yeah, what an idiot

Wow..talk about overreacting. It was hardly political commentary.

I will let my family members who lived, and were killed under Soviet Communism know that it's a laughing matter....

Sorry to tell you that the Cold War is not a synonym for communism. He didn't say maybe all those who were murdered in gulags were worth it. Then again, maybe i'm misreading it... but if you can't take this kind of humor, might I suggest you steer clear of the majority of professional comedians.

He sounds like he might be a good player in a year or two. I wish looks were what made players, because i wouldn't be against having a Kobe.

Wesley has looked good in scrimmages, quick, good hands, good defender, he should be a BIG help in the post this year when/if TRob gets into foul trouble. In fact, he may be more polished than Withey.

Good comment, but just for clarification. He transferred from Lamar University (not a juco), in Beaumont, Texas. Not Lamar Community College (a juco), in Lamar, CO.

Love how we get a photo of his "shot" he's working to improve. I guess the dunk helps build his strength. Hey LJW how about a different photo? Like a Dirk N. fade-a-way jumper?

Or Maybe one with Kobe next to him in the same pose, than we could really determine if they look similar...

A bit off the topic but from Rivals.....

Class of 2013 sharp-shooter Conner Frankamp of Wichita (Kan.) North High School is being recruited by Kansas, Oklahoma, Boston College, Nebraska, UCLA and Missouri. Kansas and Missouri are on him the hardest, and he would love a Kansas offer as a longtime Jayhawk fan.

Gonna have to You Tube this guy.

I see this kid at the local YMCA here in the Wichita area. He is always wearing KU gear, I see a litle of Tyrel Reed in him.

Not near the ball handler, or athlete that Reed is.

He has also been selected to the 16-under U.S. national team.

A nice article on Mr. Amp...... just thinking of possible names....Anyway, scored 52 in one game, a sharp shooter, and can drive the lane.

Only moments away from the Olympic Training Center. I might just go check it out.

I don't think I am going out on a limb or bringing something new to the table, but depending on how Withey/Wesley develop is how our team will do this year in March.

I see no mention of Tharpe, Teahen or Traylor.

Based on what i've seen and heard I would be very surprised to see Wesley get any time at the 3. While that would be a big lineup that could cause matchup issues, it doesn't appear that Wesley will have the skill set to compete at the 3. I do think that he could potentially give us some quality minutes at the 4 spot though.

Hmmm, didn't Kobe get into some trouble "hanging out" while in Texas? Or was it Colorado? Remember it cost him a pretty big diamond. lol

I don't know much about this dude, and I know even less about these kids that HCBS is recruiting late. But it seems to me that a scholarship would be a nice reward for the all the hard work, even if just for next year with no guarantees going forward. I'm not criticizing the staff, but sometimes I wonder why that doesn't happen more often...save the scholarship for next year and help out a kid, especially one from out of state, pay his tuition. Again, not meant to criticize whatever coach does, but just sayin'

I guess the one that I MOST want to know about is Garrett. Is he any kind of good....will he see some mop-up minutes or something even a little more than that?

<p>cbssports.com is reporting that KU is recruiting SF Ryan Taylor who had previously committed to Louisville. Any more news on that?

He is scheduled for a visit this weekend and Ku has offered a scholly I believe he is ranked 143 in top 150. Dont know much more about him.

Wow, I had no idea anyone made that kind of loot in Europe. Before this, if anyone had asked what I would guess Keith made per year in Europe I would have said between 150k and 200k...boy have my eyes been opened. Good for Keith!

Kuan got a nice contract with 5 mill Euros.. and doesn't seem to be leaving. The NBA is top dog but they aren't the only game that pays..

Kuan got a nice contract with 5 mill Euros.. and doesn't seem to be leaving. The NBA is top dog but they aren't the only game that pays..

Even though Kansas made the final cut along with UCLA, Kentucky, Arizona, UNLV, Duke and Texas by Shabazz Monammed, it appears like we are well in the back of the pack based on his evaluation of each school.

He loves the weather in California and Arizona [not a great selling point in Lawrence] UNLV is his in his hometown. [Can't beat proximity!!] Kentucky's style of play is perfect for him [So he says] Duke has Coach K [Who Shabazz feels has a chance for a NC immediately.] Texas has playing time [Guess he doesn't know who coaches there] Kansas has Bill Self, a really nice guy [Reminds me of the many times my girlfriend at the time would say, let's just be friends.]

He has OAD written all over him and we all know how well that has gone so far.

Too bad...one of the great names in sports!! The nickname potential is almost endless!!

Now, of course, as cougars, those former flames are saying the same thing, and then exploiting young men. Life is not fair. :-)