Kansas head football coach Turner Gill discussed how his experiences as a father translate on the football field, and vice versa, after speaking a Dads Day event hosted by Dads of Douglas County. 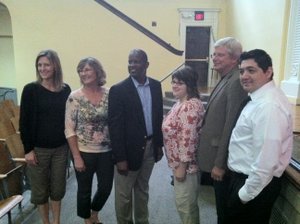 Gill said he was thankful for how he and his two sisters were raised, and he shared stories on how his background shaped the way in which he and his wife raise his two daughters.

“I respected my mom and dad because I saw how they lived their lives,” Gill said. “I never saw an argument between my mom and dad. Maybe they did the purposefully ... but I really look back at that and try to value that as I go into my marriage and how I want it to be done in my family.”

Gill’s father worked as many as three jobs at times — two performing janitorial services and another at a laundromat if the family needed the extra income. His mother worked as a beautician.

Gill said the toughest part of his job is being away from his family, and he discussed the hectic schedule that comes with the job as a Division I college football coach. Regardless of his crowded calendar, he stressed the importance of staying on track and committed to family. Even with his busy schedule, Gill always sets aside two nights each week. His wife gets one of those nights, and his daughters take turns every other week for the second night of his undivided attention.

“There’s nothing that’s going to interfere with those particular nights that I have set,” Gill said. “We set that schedule ... and I cannot let anybody interfere with that because I’m trying to show them that I value them and that I’m going to be there for them. Yes, you understand that Dad’s going to be gone quite a bit, but Dad says this day, this time, is with me.”

He says it is about the little things as well.

“I’m a Post-it note person,” Gill said. He’ll often write little notes on his daughters’ mirror or put one in their lunch boxes to continually remind them of family.

Because Gill has a family that extends beyond his home, he tries to apply fatherly techniques to his coaching life.

“God gave me two daughters. As you know, I was going to be a coach so I’ve got thousands of sons,” Gill said. He refers to any football organization he’s a part of as a “family” and is always sure to tell his players’ parents that he intends to treat their son as his own.

“I look at this as, for me, to try to help our society to bring better men and bring better families, better husbands, better fathers to our society through the game of football. ... I’m here to win football games, no question about that, but I’m also here to make sure these men understand how to value ... themselves ... and have a respect for all other people, no matter who they are.”

Because some players on the team come from single-parent households, Gill tries to put them in an environment in which they can see the interaction among him and his family, as well as the team’s other coaches and their families, and to experience a male presence within a family, if only for a few days a year.

In his 20-plus years of coaching, some of Gill’s players have been fathers themselves, trying to balance being a football player and a dad. The top advice he gives them?

Devin Zell, a single father from Lawrence, has a 3-year-old son and has been involved with Dads of Douglas County for about eight months.

“I really joined the group as an opportunity to reach out with other fathers and to learn from them; to find activities that I can participate in with him that were a little more structured than just playing Legos and putting puzzles together,” Zell said.

Zell moved to Lawrence 15 years ago to attend KU, but he could care less about football — he has never attended a game. His presence Monday night was solely to hear Gill speak from a father’s point of view.

“I really liked what coach mentioned about having a time to share a positive thing on a regular basis,” Zell said. “I make it a constant point with my son to every night ask him about something that he’s proud of even though he’s 3 years old. I really like coach’s idea about keeping a family journal to start recording some of those memories that might otherwise be forgotten.”

Never let kids see their parents argue. It gives them the most amazing feeling of security--Lou Holtz

As much as I bust his chops for his coaching ability (etc) much love and respect for coming from nothing to getting where he is today.

Cindy-Lou Who thanks you.

Did you just call his parents "nothing"? A lot of people are poor and have fulfilling lives. For crying out loud he talks about how he's modeled his marriage to his parent's marriage. How is that nothing? I'm sure you didn't mean it but you just insulted his parents pretty badly.

You can never place too much value on a father who has made the choice to be an activity part of his kids lives. I believe Coach Gill walks the talk and I also believe that over time that his emphasis on mentoring those that come to Kansas will make a difference in their play on the field.

Yes, and in recruiting.

Dr Tom's, and there is a chapter dedicated to him in it.

Only if Snyder wrote that book 25 years ago.

Hats off to the LJW Sports Dept for bringing us something positive.

Family is a good thing. Stessing WINNING is good too.

Excellent article. A good family is key to a successful and happy life. I admire Coach Gill's outlook and approach to family life.

I'll take time with my family over the $M these guys get paid. One thing money can not buy, besides love, is time. A couple of hours, every couple of weeks, with your daughter is not enough. The song, "The Cat's in the Cradle," sums up society, and it's current situation.

The times mentioned above, is a special time for undivided attention, not the only time he see his kids.