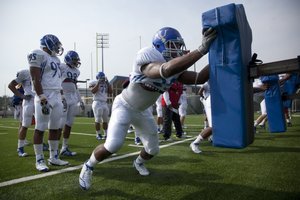 Though he won’t be around to see it, former Kansas University defensive coordinator Carl Torbush said in no uncertain terms at his retirement news conference that the KU football defense was a unit on the rise.

“There’s no doubt, athletically, we’re better now than we were last year,” said Torbush, 59, who stepped down May 31 to focus on his upcoming battle with prostate cancer. “We’ve got more depth here than we’ve had before. We’re faster than we were before.”

And now, with cornerbacks coach Vic Shealy being promoted to defensive coordinator and defensive line coach Buddy Wyatt bumped up to co-coordinator, the Jayhawks appear to be headed toward a slight change in the way they play defense.

Along with head coach Turner Gill, Shealy and Wyatt made sure to emphasize that the foundation for what KU would do on defense was in place, thanks to Torbush.

“Even though it’s been a short term here, it’s been a really important term,” Gill said of Torbush’s one year with the program. “I appreciate what he’s all about, and I know that he’s a person that’s going to continue to have KU in his heart and in his mind.”

Now it’s time for the fine-tuning.

The early word out of KU’s camp is that Shealy and Wyatt will coach pressure defense and strive to create havoc for opposing offenses. There’s even been talk of switching the base package from a 4-3 to a 3-4, a move that would allow KU to put more linebackers on the field and better utilize the speed it brought in at that position. That’s about as detailed as the group got about any upcoming philosophical shifts.

“I think you’ll see some changes,” Shealy said. “Inevitably, it’s going to happen when you get a different personality. There are many ways to skin a cat, and football is no different. I would rather not get too much into the scheme stuff because we would like to have some surprises out there in that first game or two.”

Added Gill: “We’re gonna do some things maybe just slightly different than we’ve done in the past, but it’s not gonna be a whole lot.”

Throughout the offseason, Torbush talked about improving the defense with better speed and better depth. On his way out, he continued to stress the importance of those elements while also touting how much a year of experience would help this year’s defense.

“There’s no question that will help them be better this year,” he said. “The more battle-tested you get and the experience that you gain, you can’t replace that.”

Torbush also was happy to give his endorsement to KU’s new defensive bosses.

“I have no doubt that the defense will be in great hands with Vic,” Torbush said. “I’ve known Vic a long, long time. He’s a tremendous football coach, he’s got great knowledge and will be a great leader of men. I’ve been around coach Wyatt for a number of years and he’s been around some great football coaches. I don’t have any doubt that he’ll be a great defensive coordinator, as well.”

Torbush continued: “This program’s not gonna miss a beat. It’s just a situation right now that I feel like I need to move on with my life. I’ll never forget my time here. I’ve been at some great universities. Academically, it’s a great school. Athletically, it’s a great school. It’s got great tradition, great coaching staff, great facilities. They’ve got everything that needs to be here to have a chance to succeed.”

That's my tribute to Dave from the show Storage Wars. Just letting you know I'm here.

Just letting you know we think you are an a$$!

Easy JJhawk - ahper has always been against KU football coaching since Gill was hired. He just wants what's best for KU in his opinion. He has stated he will change his tune if the program turns around.

thanks for posting, APCE. Very insightful as your posts usually are.

"Though he won't be around to see it,"... my father has had prostate cancer for years, and it isn't necessarily or even often terminal, so I imagine Carl will be around to see the new D unit. Unless of course this is a commentary on how often the Hawks will be televised this season...

I've been looking for KU to switch to a 3-4 for years now. I'm surprised we haven't, considering how pass-oriented the Big 12(10) has been recently. I guess now they feel like we have the depth at LB to make the switch, and it will certainly help our thin D line be better rested. I'm excited to maybe see Dorsey at nose tackle, and a speedier Oporum and Agostinho and Lewandowski on either side.

you're EXCITED about Dorsey, a 6'0"-273 pound DT, playing nose tackle in a 3-4? are you high? the reason we haven't (and still shouldn't) switch to a 3-4 is because we need (and currently don't have anything resembling) a DT big enough to play NT in a 3-4. We've had (and still have) major issues with D-Linemen. 3-4 would be a disaster.

Size is important, but not everything. Remember Rich Glover at Nebraska in the early 70's? 6'1" and 235 pounds. Outland and Lombardi Trophy winner. Not to say that we have a Rich Glover waiting in the wings, though.

I would also argue that in 40 years, the game has changed a bit. Good point on Glover, though.

I disagree. That's exactly why we should go to a 3-4. Because of our lack of talent and depth at DT is only more reason to put speed on the field. We have a slew of nice young linebackers and I think this would be a great year to implement the 3-4.

And when someone decides to run the ball against our mini 3-4, we get roasted worse than last year. Still not on board with that.

swishy - yes, I actually usually am relatively high. Granted we don't have any size or depth at DT, but we have speed and depth at LB, and the 3-4 would accentuate the latter, while a 4-3 will expose the former.

Don't forget John Williams. He could easily get back up to 300 from his current 290. He used to be in the 320s. I always thought he would be a great nose tackle.

Not intended to mean terminal at all. My bad. Wish we would've caught that and re-worded it.

Just meant that since he's moving back to Tennessee he won't be here to see the defense on a daily basis like he had before. Seems like most of you took it that way, but I do regret the wording.

Have a great day!

That's OK. We know you better than that.

I wish Torbush this best, but I won't miss his give up 60+ points his gains per game

Thanks for the article, Matt. I'm a little surprised you were able to get this much info out of coaches Shealy & Wyatt.

Keep up the great work with your football insights.

haydenhawkco.....what are you apurseshoppingexperience's little bTh??? You sound like you care way to much about what purse boy posts.

I would love to see us in the 3-4, but it is a pretty major change, which could lead to a long season. But with the tough schedule next year, why not give it a try so maybe we will be better the following season.

Scareysmart ran the 3-4, and the big 12 ran the ball down their throats.

I'm not against KU using a 3-4, but I just don't see the personnel on the roster to use it effectively on a regular basis. KU doesn't have a DT that is physically capable of being a two gap defender that is required to have a good 3-4 defense. If Shealy wants to use it in passing situations to create some confusion on the other team's OLine by trying to guess who is blitzing and who isn't, I'm fine with that, but I don't see anything good coming out of using it as a base defense. The Big 12 appears to be going back to more of a run first mentality with a lot of schools and if KU does use a 3-4 most of the time, teams are going to be running through and around KU's DLine. If KU doesn't have players that are physically capable of plugging up the holes on the line, the run defense is going be near the bottom of the national rankings next season.

we could also run the 3-4 how green bay does it (blitzing two lb's every down and sending them in zone on third down) there arent many colleges that do that and we could be successful with it.

how i see it, we dont really have a whole lot to lose this season. if we can get 3 or more wins, the season is a success in my eyes and if we somehow surprise the world and get into a bowl, all these fair weather fans can just eat a big bowl of all the s**t they have been talking this off season.

That's exactly how I see them using it, kujayhox. And I think it would be as effective as our small D-Line plus give extra protection on third and shorts.