LB coach Vantz Singletary excited to be at Kansas 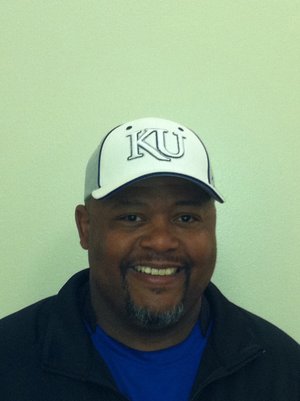 Vantz Singletary has been around football long enough to know a good matchup when he comes across one.

The way he sees it, the name Singletary and the recruiting grounds of Texas are just that.

“Especially around Houston and Dallas, the Singletary name is synonymous with those areas,” Singletary said.

Introduced last Friday as KU’s new linebackers coach, Singletary took time out Monday morning to visit with the Journal-World about everything from his goals and visions for KU to his fondest memories of his Hall-of-Fame uncle, Mike Singletary, with whom KU’s newest assistant coach worked for two years in the San Francisco 49ers organization.

A 17-year veteran of college coaching who spent the 2008 season working alongside KU coach Turner Gill at Buffalo, Singletary elected to return to the college game for two reasons. The first was passion.

“I really liked (coaching in the NFL),” Singletary said. “But college football is something that I really love. It was really nice to know that I had a chance to come back.”

The person who gave him that chance was the other reason he decided to return.

“It was pretty much a no-brainer because of my past relationship with coach Gill,” Singletary said. “I felt like I owed something to him because I only was with him for that one year in Buffalo. But the National Football League called and it was a call from a very special person in Mike Singletary.”

During his time at Buffalo, Singletary learned a lot from Gill, a man who has his own special relationship with Singletary’s uncle and actually encouraged the former Buffalo defensive line coach to take the job with the 49ers. In addition to sound guidance, Singletary credits Gill for showing him how to be a good husband, a good father and a good coach.

When the opportunity popped up to rejoin Gill’s staff, Singletary instantly began day dreaming about what else he could learn from Gill.

“It was kinda perfect timing,” Singletary said. “I knew who I was going to work for. I knew what he was all about. And it’s hard to find that in this business. So, to me, the decision to come here to the University of Kansas was easy.”

Like most members of Gill’s staff, Singletary preaches effort, accountability and intensity to those he mentors.

“People always ask me, ‘What defense do you like to run?’” Singletary said. “And I say, ‘You know what, I’m big on fundamentals and I’m big on technique. Fundamentals and technique is what those guys need. If they execute in any one of those packages, they’re going to be successful.”

Because he’s a native Houstonian, Singletary, 46, has strong recruiting ties throughout Texas. But he says developing meaningful relationships with the young men he’s trying to sign is the key to success.

Of course, in that neck of the woods, having the Singletary name to go along with his recruiting prowess doesn’t hurt.

Singletary, who’s mother is Mike Singletary’s older sister, is married and has four daughters, ages 24, 22, 17 and 13. He said he hoped to have his family moved to town by July 4 and added that he’d be hard at work for the rest of the summer.

“This is not a vacation for me,” he said. “I’m still pressing forward and I’ll be watching the guys from a distance, trying to learn what kind of team we’ve got here.”

Well good luck and welcome aboard Vantz!Now lets get this football team back to some Respectability!

Vantz, welcome to Lawrence! Glad to have you at KU and part of a football program that is definitely on the rise.

Good guy, good coach, that has ties to all over Texas recruiting is how you see it. I see it as a guy with small college coaching experience that only worked in the NFL because of his uncle. If he's so great why did it take him 6 months to land a job?

It's a shame LJW didn't give more of Vantz's background. He's sent a load of players to the NFL from all those smaller programs. He also coached with Gill's championship team at BU. 6 months to land a job isn't that long, not that we know anything about what jobs he was applying for.

We don't even know that he applied for any before Gill had this unexpected opening. Maybe he wasn't desperate enough to throw himself at the first opening he saw.

That's exactly what he said. He had some offers but he wasn't just going to move his family again just to take a job. He was looking for the right fit and he believes he found it.

We'll have more on Vantz throughout the summer. There are a few good stories with him.

Please do Matt. I will be looking forward to those articles.

Ahperse, you will just have to endure the summer and wait and see what will be coming. I hope that you end up eating your words in the future.

And, my comment below is meant for Ahperse as well.

Good guy, good fan, that has so much football knowledge. I see it as a guy with a small brain and little knowledge and is stuck with a no win attitude.

I've been a fan of Kansas University Athletics since the late 70's. I support the team through thick and thin. I could be like a few of my relatives, who are Kansas fans (in basketball) and Nebraska fans (for Football). But, no I decided to support KU athletics through the good times and the bad times. Do I get upset with the football team. Yep, I sure do. I've had far many more disappointing season than cherished seasons. But, I don't continually badmouth the program (as you seemed inclined to do). You seem so fast as to show your displeasure as to the KU Football Coaching Staff. Why don't you take your attitude to Nebraska, Ohio State, Florida, Alabama or elsewhere. I'm sure their athletic programs will be much more satisfying to your football wants and desires.

I happen to work with a guy who is a Texas Alumni, and it pisses him off that Texas Basketball can't get over the hump in NCAA Basketball. But, I don't see him jumping ship when Texas Athletics have flop years.

Soooooooooooooo you're a better fan than me because you continue to support the team and give your time and money through 30some years of losing football? Ooooooooooooooo k! You're the problem dude! It's clowns like you that say "support no matter what" and "give'em three more years then we'll see" instead of challenging the school to put together a winner on the field.

As for your family members, they seem to have more brains than your and I. But I bet they would gladly come back to the hawks if they were decent on the field. Bet everyone would. We are not a basketball school. We are Kansans that are proud of where we came from and proud of our school and we get to show that pride by cheering for our basketball team. I along with most would love to do the same with football.

Well, all I've seen you do on here is bitch and moan (99% of the time). There is one way to show your displeasure to the Administration @ KU. By not showing up to the games. Which, I'm sure you do very well at.

But, for you to get on this site and tell everyone else how stupid they are for supporting the current coaching staff.

If Gill and his Staff can't get the job done, I'm sure the AD and his staff, Boosters, etc.. will do their job of taking care of the situation of getting rid of T. Gill and Staff (when it is necessary).

Pretty hard for the current AD to terminate T. Gill and Staff at this point and time. After all, $2,000,000.00 (a year with no buyout) is a pretty big pill to swallow (at this point and time). I'm sure, if the football team is not progressing forward as expected (for a $2,000,000.00 a year) Salaried Coach (as the program should be). Then, I'm confident enough in the AD and Boosters to put an end to the current tenure.

So, sit back and relax. Afterall, Lew P. could've hired alot lesser known coach. Look at Ohio State, did you ever think that Jim Tressel would've turned out to be such a sucess @ Ohio State (when he was hired from what Football Powerhouse)? Oh yeah, Youngstown State. Hmmmmmmmm, they are a BCS Conference School.

Actually, yes he is a better fan than you.

We could've hired Mike Singletary himself to coach our LB's....and you would've been negative.....you can't negative ALL the time....can you!?!?

Vantz is one of a few fatherless, success stories.

So there was a second Immaculate Conception?? Good to know...never can have too many miracle workers on a coaching staff, especially on our defensive ranks.

If he had a Father, he wouldn't be a Singletary..