Helmets have improved over the years

Kansas University equipment manager Jeff Himes is in his 24th season with the school and has seen the technology of helmets improve dramatically.

“The old-style helmets really didn’t do a lot for a temple shot, a side shot,” Himes said. “Everything was pretty much (designed for) a forehead shot.”

Himes said football has evolved to more of a NASCAR-style helmet, which does a better job of protecting the whole head.

Safety features include an air pad around the jaw, the side of the head and then on the top of the head. There’s also a pad in the front and another air pocket in the back.

Each air pocket is inflated individually, so every player’s headgear fits exactly to his head.

Only about 10 still use old-style models — and almost half of those are kickers and punters.

“Those guys have just kind of what’s comfortable,” Himes said, “because sometimes, those (Revolution) helmets get a little heavy for a kicker.”

The Revolution and Revolution Speed come highly recommended, as a Virginia Tech study earlier this year rated 10 helmets for their ability to reduce the risks of concussions.

The Revolution Speed earned the best overall rating of five stars, while the Revolution earned a “Very Good” four-star ranking.

KU also was part of a test period last year with Riddell’s Revolution Speed 360, a less bulky option with two grooves that run down the middle. KU quarterback Jordan Webb used that style last season, and Himes said five to 10 KU players planned to use the model in the fall.

Many steps are taken to ensure the helmets are safe to use.

For one, Himes has student managers go through the locker room every day to make sure buckles are OK, air pockets are working properly and that there are no cracks in the shell.

KU players had three different helmets last season: one for games, one for practices, and a third alternative one used in the season finale against Missouri.

The game helmets are used for the 12 games during the season and in the 15 spring practices; the practice ones are only used for fall drills.

Both sets are sent in each year to be reconditioned, where they receive new padding, chinstraps, buckles and facemasks.

At KU, every helmet has a life span of four years; after that, it is discarded.

Both Lawrence high schools also have safety measures in place with their helmets.

“That made me feel really good,” Wedd said. “I’ve done some studies myself and listened to a bunch of people about it, and I felt like we were on the right track.”

LHS gets a dozen new helmets each year that go into a rotation before keeping them for 10 years — the length of time for which they are certified.

FSHS football coach Bob Lisher said keeping up with the latest information was a necessity.

About a decade ago, Free State bought Riddell’s VSR4s for its players; that same style received a one-star, or “Marginal,” ranking in the Virginia Tech study.

“They recommend you not wear those. So we don’t put our kids in those any more, and we’ve got 12 of them left,” Lisher said. “But those were top-of-the-line 10 years ago.”

Both high schools, like KU, have their helmets reconditioned following each year.

Quote of the day... "Sometimes those helmets get a little heavy for the kickers"......LMFAO.. Finkle and Einhorn....ahhhehhhh...anyway... glad the rest of the players who don't even pay attention to how heavy their helmets are are safer....

Date: 1917-01-28; Paper: Richmond Times Dispatch Headline: “Football Inquiries Show But Few Lasting Effects.” Story: “Lawrence Kans.- January 27. In order to ascertain after-effects of college athletics upon students, Dr. James Naismith, head of the department of physical education at the University of Kansas, has announced statistics complied after extensive correspondence with former athletes. In securing his figures, Dr. Naismith sent his inquiries to football players on teams prior to 1907, believing these men should by this time be able to detect any after-effects of the game. The questions were sent to football men, as that game, he considered, is the most violent of college sports. To the question, ‘What injuries did you suffer while playing football?’ forty of the eighty-five replies stated they had received none. The other forty-five answered sprained ankles, broken noses, and sprained knees were common afflictions. All but six stated they had completely recovered from their injuries. None was reported seriously incapacitated from their participation in the game. The valuation placed on the personal benefits received from the game varied greatly, although increased physical development headed the list. Among the other benefits derived included self-control, rapid judgment, wide acquaintanceship, determination, and courage.”

Great article. Could you post photos (or a link to photos) that compare the old and new helmets side by side? Thanks.

The new 360s are on Riddell's site here:

Also, a picture of Jordan Webb in one is here: 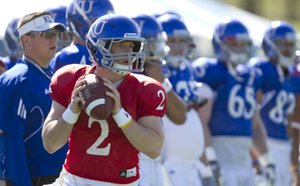 Kansas quarterback Jordan Webb looks over his receivers as he runs through plays with the offense during practice on Monday, April 11, 2011 at the KU practice fields. by Nick Krug

Himes told me the Riddell Revolutions are what you would see Peyton Manning wear:

Here's Riddell's picture of it:

An old-style helmet — like the VSR4 mentioned above — is just one you probably remember seeing about 10 years ago. Here's an example:

Wow, Thanks Jesse. By the way, I've already seen the future of football helmets:

Okay Jesse. But I was really just using the helmet as a metaphor when I said Jordan Webb's helmet looks too big for him. The idea was, when Webb wears it, he looks like a bobble-head doll, because that's kind of how I see him. But even if Reesing had worn the new helmets, he would've looked like a stormtrooper, because that's kinda how I saw him. Capice?

Any truth to the rumor that the Riddell Revolution Speed 360 that Webb used last year, was malfunctioning in it's purpose of allowing him to turn his head the entire 360 degrees required to keep from getting pummeled behind that OL?

Greatest helmet of all time!

I know right? It's like installing a super-duty truck bumper on your head. How intimidating is that?

I read this headline and thought the article was going to be another whooper from TK.