Preschoolers at Kennedy School learn importance of KU vs. K-State rivalry in honor of Kansas Day

Students at Kennedy School spread some of the excitement leading up to Saturday's Sunflower Showdown rivalry match-up between the Jayhawks and Wildcats at Allen Fieldhouse. 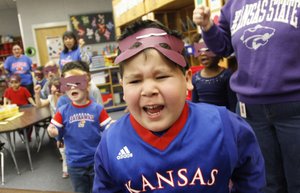 Kennedy School student Mikey Gregorio belts out the lyrics to "I'm a Jayhawk" as he and other students in Jill Anderson's class make their rounds performing Kansas University and Kansas State University songs and chants for other classes Friday, Jan. 28, 2011. 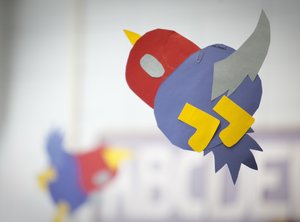 Jayhawks assembled from construction paper hang from the ceiling of a classroom in Kennedy School on Friday, Jan. 28, 2011. 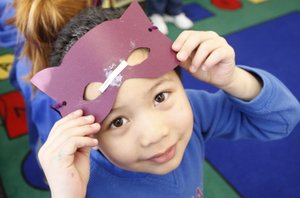 • Biggest KU win: 71-58 in 1988, in a regional final of the NCAA Tournament, sending the Jayhawks to Kansas City, Mo., for the Final Four and a national championship.

State Farm, as GameDay sponsor, pledges to contribute $1 for each fan attending the morning session to Hawk Zone, an organization from Student Union Activities that works to boost student involvement in campus athletics.

Kids in Lawrence learn the importance of the KU-Kansas State rivalry early on.

“They all know what a Jayhawk is,” said Jill Anderson, a K-State grad who teaches 16 preschoolers at Kennedy School. “When you’re born in Kansas, you’re a Jayhawker — no matter what.”

All this week, Anderson’s students have been learning all about their place in the world, and the preponderance of both Crimson and Blue — and splashes of purple — during this most significant of milestones.

As most any elementary or secondary student in Lawrence and elsewhere in Kansas may recall, Saturday is Kansas Day, marking the territory’s entry into the union as a free state. And just as they do every year, students often find themselves spending time in class baking bread, making cakes, singing “Home on the Range” and committing to memory all sorts of knowledge regarding Kansas history, features and trivia.

But even with all that, this year’s state birthday is especially significant for two reasons:

• Saturday just happens to be Kansas’ sesquicentennial, a full 150 years since Kansas became a state.

• The Jayhawks and Wildcats play Saturday at 6 p.m. at Allen Fieldhouse.

The marquee matchup means millions of people across the country will be getting an education in all things KU, K-State and Sunflower State. That’s what happens when the game is the featured contest on ESPN, which is bringing its raucous GameDay show — featuring Rece Davis, Jay Bilas, Hubert Davis, and Digger Phelps — to the fieldhouse for hours of programming, promotion and prognostications.

Thank a couple of native Kansans for helping turn the nation’s eye on today’s basketball bash in Lawrence.

“When I brought it up to people here, they looked at me like I was crazy: ‘What are you doing, knowing the state’s birthday?’ ” said Nick Dawson, ESPN’s director of programming and acquisitions for college basketball, who grew up in Hutchinson and graduated from KU in 2002. “In a perfect world, you couldn’t pick a better day to have these two teams play. … And it’s great for the state.”

“As a native Kansan, it’s a significant deal,” said Allen, who grew up in Chanute and graduated from K-State. “No matter where you grow up, or where you’re from, you have pride in your background. This was something natural, something we thought would be fun. All the pieces fell into place.”

Back at Kennedy, the youngsters in Anderson’s preschool class certainly know Saturday evening’s game is big, even if they don’t understand all the details.

Rai’Onna Helms couldn’t know that KU’s biggest win over K-State came in 1988, when the Jayhawks advanced to the Final Four with a 71-58 victory in the Midwest Region — on the way to a national championship.

Daizon Callahan couldn’t possibly recall that Scot Pollard made the first and only three-point jumper of his college career during KU’s 78-58 Senior Day victory in 1997.

And Hussain Moukali? How’s he supposed to know that the Jayhawks toppled the Wildcats during the first-ever game played at the fieldhouse, 77-67, on March 1, 1955?

“It doesn’t really matter to me that they don’t they don’t know the answers to all these things,” said Anderson, who “bleeds purple” despite earning her teaching certification at KU and taking graduate classes on Mount Oread. “We talk about how you have to stay in school. The important part is that they learn that school is important, and that college is important, and that when you grow up you need to go to college.”

The high-interest rivalry game gives kids a chance to dream, to identify, to predict — all during a milestone in the history of their state, the one born with the help of anti-slavery fighters known as Jayhawkers, the nickname now often reserved for native-born Kansans.

Fun article, Mark. But you might want to change your second bullet item under two things to know about Kansas. It says the game is today at 6:00.

I enjoyed the article and the funny picture of Mikey Gregorio, by Nick Krug. The picture of Mickey is probably the reaction after KU lost to Texas---very funny!