Self shrugs off streak’s end, other KU notes 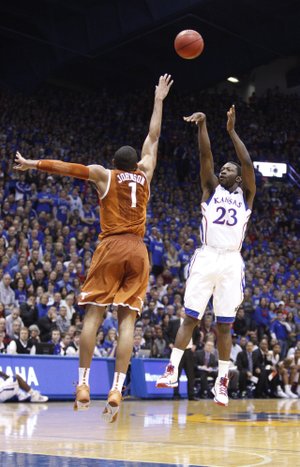 The Kansas University men’s basketball players said it was their own subpar effort that led to a 74-63 loss to Texas on Saturday afternoon at Allen Fieldhouse.

“You can’t take anything from them, but I think we beat ourself,” KU forward Marcus Morris said. “I think that’s the only thing that really happened is that we beat ourself out there.”

“I think we just had some mental lapses. I think it was more so us than them,” KU guard Tyshawn Taylor said. “It was just us missing assignments, not knowing what we were supposed to do, and they capitalized on it. Every time we made a mistake, they scored.”

For one, it was the presence of Texas’ 6-foot-8 freshman Tristan Thompson, who registered five blocks and altered many other shots.

UT had nine blocks, equalling the number KU had had blocked in the previous four games combined.

“I think the second half, it was basically we bailed them out by not attacking them,” KU coach Bill Self said. “I thought we played so conservative and passive (in the) second half. Post presence may be part of it, but also pretty poor play.”

Self also believed the Jayhawks didn’t get the ball into the paint enough.

“That’s something that we really didn’t do as well as they did,” Morris said of getting to the foul line. “They were shooting in the bonus with, like, 13 minutes to go. We’ve definitely got to get better on defense and stick together.”

“We’ve been behind in the league race before, but it puts you in a situation where there’s very little margin for error,” Self said. “I personally think Texas is really good —good enough to win a national championship. I really do. I think they’re one of the best five teams in the country right now, hands down.”

Jayhawks will learn from this. Probably a good loss. Disappointing, but a good loss. I just feel for T-Rob & his family.

Agreed. The loss by T.Rob's family shows that there is more to life than a basketball game!!!

While I also have sincere sympathy for Robinson's personal loss, I must say that there is no such thing as a good game loss. Saying so is just rationalization.

KU needs a center rebounder against good teams. When the Morris twins are away from the basket, outside looking for a shot, there is only a slim chance for a rebound. KU gets by against so-so teams by out muscling them, but not the teams they need to beat to win the tough games. Also, as Self is want to say, you can't be hitting every night so you must concentrate on defense. This is a so-so defensive team. Beyond that there is no explaining the collapses that have occurred in the NCAA tournaments and in the second half last night.

Likewise, UT is hot right now. Wait a while they will come back to earth. Barnes is an excellent coach and he has the richest athletic department in the nation funding his facilities, etc.

It seemed to me UT got a number of rebounds just because they were looking for the ball while the KU players were looking at boxing out or other activity on the court. Obviously, there are a lot of things happening on the court, like boxing out, but hopefully you have your heads up enough to look for the rebound.

The other thing that I noticed was UT just got physical, and KU wasn't tough enough to play through it. It's a lot easier (weaker) to take J's that it is to go where you're gonna get hit. It also makes sense for the opps when the FT% is weak. Rather disappointing that more effort wasn't made over break to correct that. It is what won the NC in '08 (10% better during conference than non-con, and only one miss against Memphis).

How bad do you want it? You gotta want it bad.

Hey, the Big 12 race is far from over. Texas has some tough games coming up. The Jayhawks do too. I would love a rematch at the Sprint Center in March. KU would love to redeem itself from this loss for sure.

Texas played well - and brought a physicality we have not seen.

I am disappointed in the loss, but learned long ago not to put all of my value and hope in young men playing a game. We live to play again. Condolences to TRob and the family.

Our shooting was not good in the second half - but Texas' increased intensity is directly to blame for that.

I do not understand why Josh Selby was on the bench so much.

Selby reminds me of Brandon Rush. Maybe for the same reason. Having some issues with the left handed smoke in his head. Definitely tends to impair ones judgement.

We went with a zone defense and they scored every time. Can't fault Self for that.

Isn't it harder to rebound from a zone?

It is harder to rebound from any (defensive or offensive) set with which the team is not familiar/comfortable.

The defense looked confused a good share of the second half. You'd see two players head to the same spot, then look at each other as if to decide who was in the wrong. Switching was not working well and no one seemed good at getting off screens. I have not seen them look so out of sorts on D in a long time I am sure part of that was Texas's skill. The same confusion extended to the offense. The ball quit moving and people were just standing and watching whoever had the ball.

Condolences to TRob and family, I can only imagine what he is going through.

There is a possibility that we got outcoached this game, as well as outplayed.

Tough loss, but it's nice to see the fans support their team instead of walking a ledge. All I can think about is how T-Rob is feeling, not the loss..

If the above post doesn't scream "I'm a troll!" I don't know how it could be any more obvious.

nebr....post your address and I'll send you some Boudreaux's Butt Paste.

your are a weak, weak shell of a person... you predict a blowout against baylor and then don't have the stones to admit your ignorance.... only to show up after a loss and think your opining is valid. you have "0" credibility. we all know you are joke!! well, seeing how we should only lose a couple of more times all year - i guess we can only look forward to hearing from you after those games. get lost troll!

I'm not a troll and I love Brady. Yet I feel we got outcoached this once and it happens so rarely I'm good with it. Sometimes we get outcoached and still win "Cornell" but it is rare. A growth experience for us all, including fans. I was out of town, but maybe we fans didn't go crazy enough when it got tight. I have been in Austin for 06 & 08, not pretty. The horn fans are cocky. More yelling for FB stars in the house when introduced at time outs than for BB team.

the AC Law game was fun, not good result but fun. The K Durrant, M Beasley, B Griffon games had unlikely results, mostly for injuries, who could have beat all those guys 100% at home, not likely but we did with great coaching and great 'team' effort + some injuries. So it was our turn.

Losing stinks learn to avoid it.

losing stinks but its apart of the game.

It was a tough loss. We'll learn from it and it will only make us better. I would also like to see a rematch between the two teams in the Big 12 Tournament. Our season is far from over and I have a great feeling about the rest of this year. Rock Chalk!