By Matt Tait and Nick Nelson

Journal-World sports reporter Matt Tait spent a few days in Normal, Ill., getting a feel for the community that new Kansas University athletic director Sheahon Zenger comes from. During his six years at Illinois State, Zenger made quite an impression on the people there. Now that he's leaving, many of them are experiencing mixed emotions - sadness over him leaving and happiness for his new opportunity. 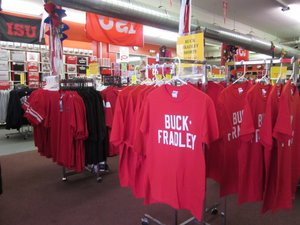 Normal, Ill. — There’s a little country diner about 20 miles west of Normal, Ill., that Sheahon Zenger and his friend, Don Franke, like to go for lunch.

Six years ago, when Zenger, the man who will take over as Kansas University’s athletic director on Feb. 1, was just starting his tenure as AD at Illinois State University, Franke — an ISU alumnus and huge supporter — took the new guy in town to the Busy Corner for some old-fashioned home cooking. The weekly escapes became a tradition as the friendship grew.

This is not rare for Zenger. He has lots of little traditions with big people. What is rare: After six years and who knows how many thousands of dollars in donations, Franke has felt first and foremost like a friend.

“He’s never asked me for a penny,” Franke said. “I like that. Because I’m more apt to give you money if you don’t ask for it. If you need it, I’ll give it to you.”

That concept is at the core of Zenger’s philosophy on how to run an athletic department. To him, it’s not just about wins, dollar signs and donations. It’s about relationships with people, a concept that now permeates Illinois State’s campus.

“We joke about it all the time,” Associate Athletic Director Aaron Leetch said. “We call it the gospel according to Zenger. And I’m a disciple.”

It’s actually more Founding Fathers than it is Our Father. It might not be an athletic department by the people — Zenger was not elected to his jobs at ISU or Kansas — but it is of the people and for the people.

“He always made you feel like, ‘Hey, we’re in this thing together, we’re friends and we’re gonna help each other,’” said ISU men’s basketball coach Tim Jankovich, who spent four years as an assistant to Bill Self at KU. “And there’s no greater feeling. What could be better than that?”

When Zenger arrived at Illinois State in 2005, he took over a program in desperate need of unity and camaraderie, and he delivered both.

Although ISU sits at the center of the “Twin Cities” of Bloomington-Normal, the university, particularly its athletic department, was the farthest thing from most people’s minds. The community didn’t care much for the Redbirds, the university had too much on its plate to care much about the community, and some people even talked about “a town with a college in it,” instead dubbing it a college town.

It was the perfect scenario for Zenger to walk into. Not because it was easy to fix, but because it was a situation begging for compassion. Zenger, along with his wife, Pam, and their three young children, brought more than that to the table.

Sure, there was plenty of talk; he’s a wizard with words. Shortly after arriving, he welcomed the entire student-athlete population to Redbird Arena and gave a fiery speech about what it meant to be a Redbird and what Illinois State was all about.

“He talked about his philosophy and how he was going to do things. And then he lived it,” said Larry Lyons, interim athletic director.

At the center of his focus was the student-athlete, albeit in a roundabout way.

Things turned around quickly, and Zenger showed right away that the nice-guy approach didn’t interfere with his ability to handle the dirty work. Just a couple of years into his time at ISU, Zenger fired two of the school’s most popular coaches and replaced them with winners who bought in to his philosophy and passed it on to their athletes and their athletes’ families.

Zenger’s time at ISU was not limited to making people smile and reconnecting a city with its scholar athletes.

In addition to nearly doubling ISU’s annual fundraising dollars from $650,000 in 2005 to more than $1.2 million in 2010, Zenger redid the Redbirds’ baseball stadium, put into motion construction of a men’s basketball locker room at Redbird Arena, locked up plans to renovate the south gym at old Horton Field House so the men and women could practice at their own facilities and gave small face-lifts to several other facilities and playing surfaces.

Some athletic directors might choose to sit back and let those accomplishments speak for them. Not Zenger.

He still made it a point to get to every ISU event he could, from football games on Saturdays to swimming and gymnastics meets on weeknights.

“Every time I go to an athletic event, he’s there,” said Katelyn Massey, ISU junior track athlete. “And he’s really just been there for all the athletes and the coaches. Even the fans. He really gets into it with the fans.”

In many ways, that’s because Zenger is a fan himself.

“His behavior on game day, particularly on football game days, really intrigued me,” said ISU President Al Bowman. “You would expect the AD to really behave like the administrator. But he’s so passionate about winning and he has so much pride that the guy is a basketcase on game day. He is tied up in knots.”

Spend a couple of days in Bloomington-Normal area and you won’t see Zenger’s face plastered on billboards or posters anywhere. His signature, though, is everywhere.

“Spread the Red,” the billboards say. “This is your hometown team” is seen elsewhere.

Many people within the ISU athletic department are well-educated about the current goings-on at Kansas. They weren’t always.

Outside of KU’s national prominence in men’s basketball and its standing in the Big 12, what went down at Kansas was simply on a different plane for the folks at Illinois State.

Then Kansas stole ISU’s leader, but instead of lashing out like a scorned lover, Redbirds everywhere embraced the Jayhawks. Of course, KU has done its share of bringing attention to itself in the past 18 months. The ticket scandals, federal indictments, coaching resignations and fights between the men’s basketball and football teams all made national news and were talked about at ISU even before Zenger left.

“I get the sense that the Kansas community was looking for someone to restore integrity and trust,” Bowman said. “And when I talked to the chancellor there, I said, ‘There is no person on the planet in a better position to do that than Sheahon Zenger.’ And it’s not just that he’s from Kansas, but he oozes Kansas values.

“He’s real. He’s not pretentious. He’s smart. He’s all of the other things that you have to be to be a successful leader.”

At Kansas, one of the biggest challenges Zenger figures to encounter is the task of turning the Jayhawks’ football program into a profitable and consistent winner. Those who worked with him at ISU say they’re certain Zenger won’t focus so much on football that he’ll neglect everything else.

“He still believes that the student-athlete is what it’s all about,” Leetch, the associate athletic director, said. “And he will not compromise that.”

It doesn’t matter what building you’re in or what subject you’re talking about — people in Normal know Zenger.

That’s by design. When Zenger arrived at ISU six years ago, he wanted to make the community feel like a part of the university, like a part of his family.

The moves he made — even the tough ones — were with that in mind, and that’s why you’d be hard-pressed to find anyone among the 120,000-plus people of Bloomington-Normal who’s said, or even heard, a negative word about Zenger.

“He’s been a coach, he’s been an athlete, he’s been in the higher-ed part of it as well,” said Spack, the football coach. “And he appreciates the whole sphere of what college athletics is all about. I think he’s a perfect athletic director. I think he’s a dying breed, to be honest with you.”

Added Glance: “He really does think of himself as having a higher purpose.”

Okay, there have been enough feel good articles. Let him get on the job and get busy.

I think this article is the "Sunday article" that was promised/mentioned by Tait in his blog posts while he was on the road.

ok, sherrif andy taylor is going to lead us. we get it! tell the people of il state to not worry because i'm sure we will one day be conference rivals with them.

I know zenger did a fantastic job at ISU but i never considered they might be invited to the Big 12.

So we have to rely on a K-State guy to fix things at KU? Go figure!

A K-State guy who got his Ph.D. in Education at KU...so also a Jayhawk.

The article the photo is from: http://www2.kusports.com/weblogs/tale-tait/