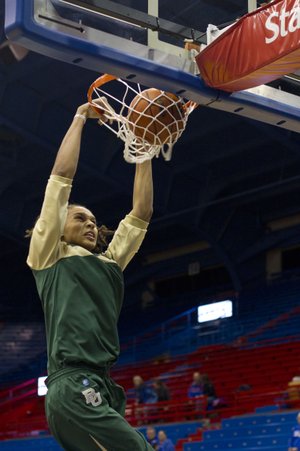 The natural place the mind wanders when watching a superior athlete play in person for the first time is to a question: What other great is called to mind?

Watching center Brittney Griner play Wednesday for No. 1-ranked Baylor in Allen Fieldhouse, the answer popped into the head swiftly. The way she plays the game recalls Kareem-Abdul Jabbar when he wore UCLA across his chest and answered to the name Lew Alcindor.

Abdul-Jabbar, when his name was Alcindor, stood above the other nine players on the floor in stature and performance. So does Griner.

Abdul-Jabbar played with the smooth, coordinated athleticism more typical of a shorter player. So does Griner. Like Abdul-Jabbar, Griner seems to lead with her brain, leaving her emotions out of the equation, seldom changing her facial expression.

Just because the cerebral, stoic types don’t open windows to their emotions, that doesn’t mean they don’t sometimes boil beneath the surface. Kareem’s boiling point came two minutes into the 1978-79 season-opener, playing for the Lakers on his old homecourt, Milwaukee Arena, against his first NBA team, the Bucks. Abdul-Jabbar took an elbow from Bucks center Kent Benson and retaliated by punching him so hard he knocked him out, so hard Abdul-Jabbar’s broken hand kept him sidelined by for two months.

Thirty-two-plus years later, Abdul-Jabbar is not remembered for that. At most, it’s an afterthought. He’s remembered for being the best college basketball player in history, leading UCLA to an 88-2 record in his three seasons and for perfecting a shot, the sky hook, that neither before nor since has been matched. He’s remembered for scoring more points than anybody in NBA games.

As a freshman, Griner punched Texas Tech’s Jordan Barncastle in the face so hard she broke her nose. It came after Barncastle tried to hurl her to the floor. Who knows what made Abdul-Jabbar and Griner step so far out of character. It could be they snapped because they simply couldn’t relate to resorting to playing with excessive physicality a game they play so gracefully, artists reacting to their canvases getting sullied by graffiti shooting out of a spray-paint can.

The way Griner plays and promotes the game, handling interviews with such professionalism, already has helped the incident that drew her a two-game suspension move on the path toward footnote status.

Baylor, a talented team enough to handle Kansas even if Griner hadn’t suited up, won this one, 76-37, with the help of Griner’s 22 points, 15 rebounds and five blocked shots.

I shared with Griner that she reminded me of Abdul-Jabbar playing for UCLA, which made the 6-foot-8 sophomore from Houston smile.

“I watch clips of him on YouTube, actually,” she said. “I love the way he played. I hope I can play like him.”

Griner’s abilities are unmatched in the women’s game.

“There are not going to be many girls who come along who are built like Brittney who play above the rim,” Baylor coach Kim Mulkey said.

Griner’s only dunk Wednesday came in warmups, by which time the outcome had been determined.

Oh yes, Lew Alcindor at UCLA was smooth and coordinated, and I bet you imagined, too, that you were Lew Alcindor when you were a little kid shooting baskets.

But, nobody ridiculed the pilot incognito like that little kid in the movie "Airplane."

Can Bonnie have the next one?

Remember when Griner punched the Texas Tech player? I remember it was just after the Oregon RB, LaGarrette Blunt, sucker punched the Boise State player. (I think) Blunt is kicked off the team and did Griner even get suspended? I've never really understood this, can someone explain?

She was suspended for I think 3 games.

Thanks...I watched the Blunt punch again (youtube) and I think his dismissal had a lot to do with how he reacted afterward as well.

did you even read the article? "The way Griner plays and promotes the game, handling interviews with such professionalism, already has helped the incident that drew her a two-game suspension move on the path toward footnote status."

Reading is hard, leave it to the professionals.

Also Griner makes me sick....in no way, shape, or form would I ever make the comparison to Kareem.

Nice piece, Tom. All I really knew about this young lady was (1) she can dunk, and (2) she punched an opponent last year. I had it in my head she's a bad actor. Thanks for showing me the good stuff she's doing to promote a sport that needs all the help drawing fans that it can get.

Love the comment: "Griner’s only dunk Wednesday came in warmups, by which time the outcome had been determined."

Pardon me, but your ignorance is showing!

If you find women's basketball so boring, then why take the time to click on this link and post a comment? Must be a pretty slow Friday night in Hays. . .that's not too surprising, though.

What a coincidence! I'm actually watching Cheers right now! Are you the fat guy at the end of the bar?