Jayhawks put on quite a show vs. Baylor Bears 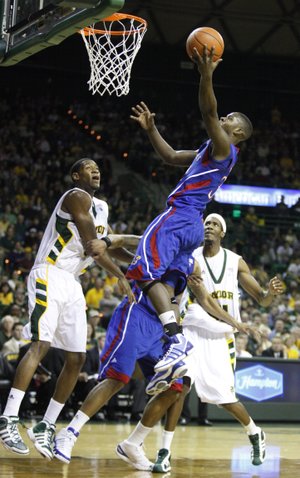 Kansas coach Bill Self talks to reporters following the Jayhawks' 85-65 victory over Baylor on Jan. 17, 2011.

Waco, Texas — A stunning 35 scouts and 10 general managers from 21 of the 30 NBA teams attended Monday night’s Big 12 Conference game in the jacked and packed Ferrell Center.

As a general rule, the less awareness college basketball players have of NBA scouts watching them, the better they play.

“It doesn’t matter to me,” Markieff Morris said when told of the general managers on hand to watch him play in an 85-65 victory against Baylor. “I didn’t even know. We just played. I gave it my best shot, and we competed.”

It showed. In playing the best half of his college basketball career, Markieff and the rest of the team illustrated how beautiful basketball can look when the ball keeps moving and you only notice it hitting the floor when it hits it hard to punctuate a dunk.

Markieff scored 15 of his 19 points in the first half, when he made seven of seven shots, including a pair of jumpers on either side of the three-point semi-circle from the left corner. The rest came from close to the hoop, where Baylor had three springy, long bodies forming the back of its 2-3 zone.

If any KU players had tried to impress the NBA talent evaluators, the team wouldn’t have run up a 53-32 half-time lead against a Baylor team that features the Big 12’s leading scorer, LaceDarius Dunn, and top freshman, Perry Jones III.

Jones didn’t need to play well Monday to remain the projected first pick in the NBA Draft, but he did, scoring 20 points and showing a great deal of quickness for a 6-foot-11 player.

“He’s a freak athlete,” Markieff said of Jones. “He has a great inside-out game. He can move real well, and he can score in the post.”

Yet, he wasn’t as good in this college basketball game as the more experienced Morris brothers, who combined for 44 points, 14 rebounds, six assists and five steals.

“The twins were the best players in the game, but I felt like everybody played well, especially in the first half,” KU coach Bill Self said.

Teams tend to take on the personality of not only their coaches, but their best players. The passing ability of Marcus and Markieff Morris ranks as their greatest skill. That should come as a surprise to nobody. They are as close as any two people can be and always have been that way. They walk to every game together at home. They sit next to each other on the team bus, room together, get identical haircuts and even have the same stray eyebrow pattern. (Look at their right eyebrows closely.)

They take great pride in each other’s accomplishments. Each player’s No. 1 goal during each possession, it seems, is to set up his twin for a bucket. That’s how they learned the game, and deriving more pleasure from setting up somebody else naturally extended to the other three players on the floor.

“They shoot 13-of-14, don’t turn it over (once, actually) and have four assists on top of that,” Self marveled at their first-half numbers. “They’re good against the zone, if we can figure out a way to get them touches. They’re so unselfish. They score, but they really do a good job of looking for others.”

In turn, others do a great job of looking for them. And the ball moves to the right places. The rapid first-half ball movement resulted in an extraordinary 79-percent accuracy rate.

The second half was far less perfect, including one you-had-to-see-it-to-believe-it moment early in Baylor’s 17-6 run to open the second half.

Tyshawn Taylor turned it over at one end, and at the other end was guarding Dunn, who had the ball in the right corner. Taylor deemed that a good time to start a conversation with the nearby referee about the foul Taylor thought should have been called at the other end. Taylor took his eye off Dunn to look at the ref as he chatted him up. This wasn’t Dunn’s best night. He was sick and he played like it, but he wasn’t about to let an easy opportunity like that get past him. He whipped right around Taylor, who fouled Dunn, giving him two free points so that he could make his point to the unimpressed ref. Taylor then missed a three pointer, but other than that addled stretch, he had one of his best games in a while at both ends.

So did Mario Little, a dangerous scorer when attacking the zone from the middle of it. He scored 10 points in seven minutes.

With the Morris twins seemingly particularly agitated by gripes about small margins of victory and by predictions that Baylor could pin an upset on them, the Jayhawks, on the day they moved to No. 2 in the national rankings, played like they eventually could get to No. 1.

“We’re going to keep playing hard every game,” Marcus Morris said. “I think we can beat anybody in the country, if you ask me. Don’t ever count us out.”

Many will pick Texas to end the 69-game Allen Fieldhouse winning streak. Can the twins play the disrespect angle twice in one week? We’ll find out.