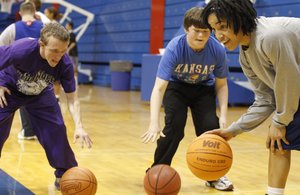 Instead, foggy weather prevented the Jayhawks from returning from Norman, Okla. — site of Saturday’s 82-70 victory over the Oklahoma Sooners — until 6:45 p.m. Sunday, several hours after the conclusion of the clinic, which was rescued by KU’s women’s team.

“It was not the best way to spend a day off,” KU coach Bill Self said of a day that started on a plane and ended on a bus.

“By far the worst thing about it was not being able to be with the Special Olympians. Because of the weather, we just couldn’t be there.

“Fortunately for us, Bonnie (Henrickson, KU women’s coach) and her staff and players filled in,” Self said. “I’m sure the Special Olympians had a great time with Bonnie and the players.”

Judging from the smiles on the faces of the Special Olympians and KU women’s players, that indeed was the case.

“We heard the guys were stuck,” said Jayhawk forward Carolyn Davis, who scored a career-high 36 points in Saturday’s home victory over Nebraska, “but we didn’t think they wouldn’t be able to get back. We were excited when coach told us we were going to fill in today. We’re one program here. We knew we could help out.

“This is always a lot of fun for us. It’s fun to learn from them (Olympians) and to teach them. We’re all here to have fun.”

What the Jayhawk men went through after defeating the Sooners cannot be classified as fun. They were unable to fly on their charter jet from Oklahoma City to Topeka Saturday night because of dense fog in Kansas.

An alternate plan to fly to Wichita and drive to Lawrence was shelved when buses were unavailable in Wichita.

After spending the night in OKC, the Jayhawks re-boarded their charter at 10 a.m. Sunday. The plane made its way to Topeka, circling for a half hour, before unrelenting fog forced a re-route to Tulsa.

After spending three hours in Tulsa, the Jayhawks finally boarded a bus that carried the team to Allen Fieldhouse.

“The guys are in good spirits. They handled it well. We’re safe and sound,” Self said. “There was some weird weather. We’re glad to hear the clinic was a success.”

Henrickson said the women’s players were happy to have chipped in.

“We did this in January with Douglas County (Special Olympics). We told our kids, ‘You are so good at it, we’re going to do it again,’’’ Henrickson said. “Our players will tell you it’s one of the best things we do all year. It’s been good. It’s been fun.”

And not an inconvenience.

“It is all about teamwork,” Henrickson said. “He (Self) called me about 11 (a.m. Sunday) and said, ‘We’ve got an emergency.’ I said, ‘As long as we can work around tutoring and figure out our schedule, we’d be happy to do it.’ And we did it.”

This, that: Self said he’d not yet decided whether suspended junior guard Tyshawn Taylor would play in Wednesday’s 8 p.m. home game against Texas A&M ... Self said Elijah Johnson, who was elbowed in the neck and missed most of the second half of Saturday’s game, was fine.

It has been quite the weather this year! Unbelievable! Fly to Topeka and then, fly to Tulsa. Wow. Sunday afternoon, I saying to myself, "hope the team made it back okay." Glad you are all safe, that is the most important thing. Good luck on Wednesday, guys!

The Big Dipper's legacy lives on! One of the neatest things I've ever done was a Special Olympics bowling event at the College lanes in Overland Park. These are the most lovable children & young adults you can encounter, hands down. My photographer friend from Baylor did the honors and was a day we won't forget. Check out his website www.moffpix.com/html/galleries/107/po.... Jeff is a really neat Christian guy-even if he is from Wacko! LOL!

It's clear that by the number of posts, this isn't as popular an article as the men would normally get...but this stuff really means a lot to a lot of people. Great job, ladies!!!

Great teamwork! Special Olympics is a wonderful learning experience for everyone.

I know that this was a great experience for our lady jayhawks. Well wishes at the Cyclones!