Greensboro, N.C. — The streak is dead. Long live the streak. 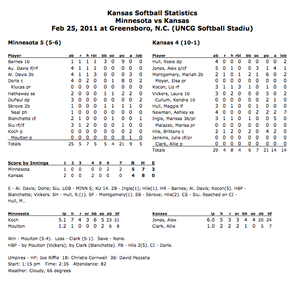 Kansas University’s softball team, which opened the season with a program-best 10 straight victories, suffered its first setback Friday, a 5-4 loss to Minnesota at the Spartan Classic.

Later Friday, the Jayhawks bounced back behind a two-hitter by Allie Clark to rout UNC-Greensboro, 8-3.

Clark (6-1) struck out a season-high six batters and gave up three runs — one earned — over the full seven innings.

Against Minnesota, KU put the go-ahead run on second base in the bottom of the seventh, but stranded her.

The Jayhawks outhit the Golden Gophers, 8-7, but stranded 14 runners.

Trailing 5-4 in the seventh inning, junior Marissa Ingle reached base on an error and then advanced on a single down the left-field line by Hile. Both runners moved up a bag following a sacrifice bunt from sophomore Rosie Hull, but Minnesota forced KU into a groundout and then struck out sophomore Mariah Montgomery to end the game.

KU will continue play in the Spartan Classic Saturday. The Jayhawks will face Moorehead State at 10 a.m.

we're now 1-1 vs. major conference schools.....not bad, considering how bad we've been the last couple of years. we're not scheduled to play another big time school for another month..and then we open Big 12 play with Mizzou.

then, we'll REALLY see where we're at. Go Jayhawks!

hey, a win is a win is a win. look at k-state football, wins against nobodies can turn into confidence to beat the big boys, silly as it may seem. good work lady hawks!