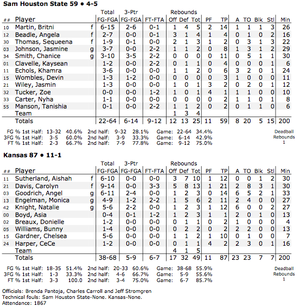 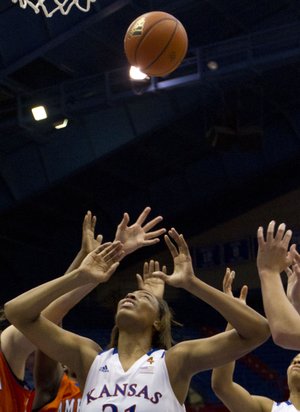 For the first time this season, all five Jayhawks starters reached double digits in scoring, propelling KU to a 87-59 victory over Sam Houston State at Allen Fieldhouse.

Henrickson loved the way her team shared the ball, passing out 23 assists on 38 field goals, in its nonconference finale.

“These guys are really, really unselfish,” she said. “They look to find somebody.”

While Henrickson was particularly disappointed with the Jayhawks’ 23 turnovers, she said their willingness to look for the open teammate was a high point in the romp.

In her 12th straight start, Knight went for career highs in points and assists (six) against the Bearkats (4-5).

She said Kansas (11-1) played to its full potential.

“Offensively, we share the ball really well. We find the open player,” Knight said. “Tonight, we just showed it.”

“That means we’re sharing the ball, we’re playing together. It’s really good,” the junior captain said. “You need to have that, especially when you’re going into a tough conference like we are.”

Sutherland, who had a double-double with 10 rebounds, agreed.

“In the Big 12, all five of us are gonna have to score in double digits,” the senior forward said, “because everyone comes out strong. It’s a lot better competition.”

According to Henrickson, KU didn’t play at a Big 12 level for most of the win over SHSU.

“I’m gonna have fun watching 10 minutes of film,” she said. “The other 30 might be agonizing.”

Indeed, it was a huge run in each half that led to the lopsided score.

Sam Houston State junior forward Britni Martin had the Bearkats up early, scoring 10 of their first 16 points, as SHSU led 16-13 in the first half.

However, Kansas countered the visiting team’s hot start with a 15-0 run.

Davis — who finished with 13 boards — scored six of her 17 first-half points in that stretch and dominated, repeatedly posting up in the paint and using her position to score effortlessly.

After Davis scored two straight baskets to give the Jayhawks a 17-16 lead, Engelman buried a pull-up jumper on the left side, Knight rewarded Bunny Williams for running the floor by finding her for a lay-up, Davis posted up under the rim and scored, Goodrich found Knight for a three-pointer from the right corner and Sutherland scored an easy lay-in to put KU ahead, 28-16.

Sutherland then scored six of KU’s final 12 points in the first half, helping the Jayhawks to a 40-31 lead at the break.

SHSU cut its deficit to 42-38 early in second half on a lay-up by Jasmine Johnson, but a Goodrich three-pointer ignited a crushing 21-0 Kansas run that lasted more than five minutes and was capped by a three-pointer from Engelman, who scored seven points in the decisive run.

KU begins its Big 12 schedule at 8 p.m. Wednesday, when it plays at Texas.