Kansas players Aishah Sutherland, left, and Carolyn Davis share a laugh on the bench during the closing minutes of Kansas’ game against Oral Roberts Wednesday, Dec. 21, 2011 in Allen Fieldhouse. 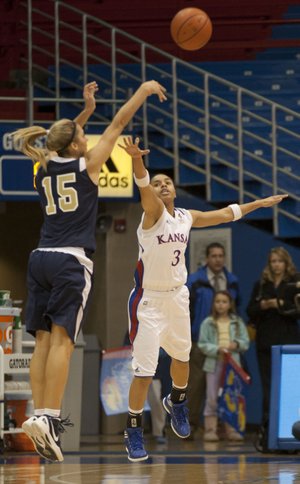 Davis reached a season-high in points against ORU with 25, while Goodrich distributed a season-best 14 assists.

According to Goodrich, KU’s junior floor general, the gaps in the Golden Eagles’ wide zone set the Jayhawks (10-1) up for a big night.

“It was easy to get to the open guy, because they were coming at us so fast,” Goodrich said of Oral Roberts’ perimeter defenders.

“Angel Goodrich is the real deal,” he said.

The pass-happy point guard could have had a few more assists, KU coach Bonnie Henrickson joked after the win.

“Aishah (Sutherland) probably owes her breakfast, because Aishah probably blew two of them (lay-ups),” the coach quipped after Sutherland finished with 18 points.

The KU single-game record for assists is 18, held by Lisa Braddy, who set the mark in 1989. Goodrich’s 14-assist night put her in sole possession of the third-best single-game assist total in program history. Goodrich passed out 15 in a game against Iowa State as a sophomore.

Goodrich, who only made two of her 10 shots, said specific assists numbers are never on her mind when she’s on the floor.

“It’s not like something I go in there and be like, ‘Oh, I’m trying to get my assists really, really high.’ I just like to get my teammates involved,” she said, “and when they’re open I like to give them the ball.”

Davis frequently found herself open against ORU (7-5). In the first half alone she went for 20 points and six rebounds in 17 minutes.

The junior captain got off to a hot start, hitting eight of 12 attempts before halftime, benefiting often from her teammates’ passes. Davis was set up with good looks for interior baskets four times by Goodrich, twice by Monica Engelman and once by Natalie Knight.

“We need for other people to throw a post entry pass and it not be Angel every single time,” the coach said.

Davis, who also had a game-high 11 boards, said KU was prepared for the Golden Eagles’ zone defense, knowing it would be extended and the Jayhawks could find open spots.

“We worked all week on that,” she said. “Our guards did a good job of finding me in those gaps.”

Kansas actually looked like it might be in trouble midway through the first half. The Golden Eagles’ confidence immediately picked up after blocking shots by Davis and Sutherland on one possession.

Soon after, ORU junior guard Kevi Luper made two straight baskets, and Oral Roberts took a 17-15 lead with 9:56 to go in the half.

After Engelman (16 points) drained a three-pointer to tie the game, a crossover and runner by Luper from 14 feet out put the Eagles up again, 21-19.

However, Goodrich set Engelman up for a reverse lay-up to tie things at 21. That was the first basket of a 12-0 run, which gave the Jayhawks control.

With numbers on the break, Engelman fed Sutherland for a lay-up to give KU its first lead in more than three minutes.

Davis then scored three straight buckets for Kansas, the last coming off a steal as the 6-foot-3 junior took the ball all the way down the floor for a lay-up.

KU went up 31-21 after Goodrich stole the ball, pushed it up the floor, found Engelman trailing on her right and hit her fellow captain in stride for a lay-in with 4:28 left.

At 7 p.m. Wednesday, Kansas will play its final nonconference game of the season when Sam Houston State visits Allen Fieldhouse.

Can someone tell me why all of the womens home games are not streamlined?

With Sam Houston State coming into town it appears you will fulfill the first part of your goal, 11-1 in non-conference play...congrats

Now comes the hard part and the part that Kansas has consistently failed at....conference play.

The team's performance for the next two months will go a long way toward whether you return or not.

Frankly, I think you have the players with the talent to make an impact in the league.

Show no fear and go out and make it happen!!

The good news for Bonnie is, this year the Big 12 seems a bit down. Aside from Baylor, TAM and Tech, the rest of the league looks kinda beatable.

KU actually garnered 1 AP top 25 vote this last week. 1 better than all but those three an Texas. 9 votes in the ESPN/USA Today coaches poll which puts KU 3 spots out of the top 25.

I realize that only puts us right in the middle of the conference, but if Bonnie is ever gonna coach a tourney team, it's now or never.

Other good notes from the ladies:

Engelman seems to be out of the slump with 16 points and 5 assists.

My Olathe girl, Natalie Knight is a thief! 6 steals against ORU.

Asia Boyd got 13 minutes and did nothing with it. Probably because Bonnie told her to go out there and be a statue.

I do not expect anything different this year from the past 7 years. The talent is there but no Coach to know what to do with it.

Keena, you are and will be missed....much as the coach won't admit it.

we used to beat CU at least once and NU sometimes at home. That was it folks.