Tyshawn Taylor drives against Davidson in the second half Monday, Dec. 19, 2011 at Sprint Center in Kansas City, Mo. 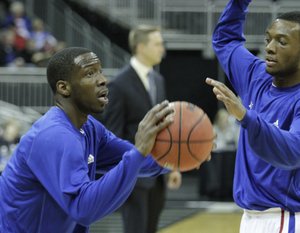 “He felt fine. The doctors said he was fine,” KU coach Bill Self said after Taylor scored 15 points with seven assists, three steals and five turnovers. “The medical staff says he looks super.”

Not fired up: KU junior Elijah Johnson said the Jayhawks were not ready to play.

“We’ve got to start the game with all five people on the same page every game. We can’t have one person 90 percent in it,” he said, not naming any names. “We need everyone 100 percent focused. We usually are like that. Today we were a little sluggish. I don’t know if nine days (between games) took a toll. We’ll get it fixed.”

Sluggish: Self said his team looked “tired” and that was not something he could explain. “We’ll practice hard but not long the next couple days,” he said. KU will meet USC at 10 p.m. Thursday at Galen Center in Los Angeles.

Award: Taylor has been named one of 65 candidates for the Bob Cousy Award, it was announced Monday. The annual honor, named for Hall of Famer and former Boston Celtic Bob Cousy, recognizes the top point guards in college basketball.

Taylor was one of 20 finalists for the award last season.

This original list of candidates will be narrowed to a final 20 by Jan. 1, final 10 by Feb. 1 and final five by March 1.

Stats, facts: Thomas Robinson had a career-high 18 rebounds. ... KU is 13-3 at Sprint Center. It was KU’s first loss in the building since a 61-60 decision to UMass on Dec. 13, 2008. ... KU’s 58.1 percent from the free-throw line was its worst of the season. The Jayhawks shot just 40.3 percent from the field, which is their second-lowest percentage of the year ... Davidson’s 80 points tied for the most points allowed by the Jayhawks this season (Long Beach State), while the Wildcats’ 47 second half points tied the most points in half by a KU opponent this year (Kentucky). ... Travis Releford had a career-high four steals.

I'm pretty sure I saw Mario Little in the crowd last night as well.

Jeff Graves was also there, according to his Twitter.

Taylor is a candidate for the Cousy Award? You're joking, right?

I give TT props for coming back so soon

TT shouldn't be a candidate for any awards! He still can't shoot and makes too many bonehead plays. We will be in trouble with teams that can shoot because we don't have good shooters.

I am not backing off from my thinking that Tharpe is being mishandled. Bill Self's use of Tyshawn for so many minutes last night reveals a flaw in a coach who is desperate for wins, at the expense of developing his bench players. Tharpe's not being permitted to play through mistakes is going to cost us down the pike, in some game vs. ISU, OK, or A+M, some team we should have defeated but for the wreckless guard play, injury or foul trouble of one of our starters. 33 minutes of action for a player 8 days removed from a surgical process?
How could Tharpe have done any worse than our starting backcourt at defending those 3 pt. shots last night? How could he have done any worse than our #1 and #2 guards at feeding the post?

Wow, you are one Grumpy Grampy! You and HCBS need to give a little credit where credit is due. Davidson played a GREAT game. They punched us in the mouth early and played that game like the winner went to the final four.

I thought KU and our guards played pretty well, with the exception of Teahan. He was a liability on both ends of the floor.

Davidson's defense was spectacular and they bothered us all game. Hopefully the Hawks learned from that. That game resembled an elite 8 game in every way... a mid-major playing above their heads, taking a ton of 3's and hitting them with a high percentage (some from NBA range with shot clock winding down).

If the hawks can learn from that, then they hopefully will maintain their composure when that happens in the tournament. I thought they did a pretty good job of holding together last night.

Just having Christian Moody in the building is enough to cause a loss. If I remember correctly he played on a team much like this one.

A few more tries and TT will master the long cross court pass.

Well, it has been over an hour since I posted my stance on Tharpe, and no one has bashed me yet for my criticism of the coaching staff. Must be some kind of a record! Hey, I am aware that Naadir might log twice as many turnovers as TT and EJ combined, at least until he becomes comfortable on the court and feels assured that he won't be yanked for his first or second misstep. It is obvious now to most of us that this year's lineup is likely doomed to lose several league games this season. If, or more likely when, we get in a bind at the guard position, what is the sense in not having developed a promising athlete who came into the program heralded as a pass-first point guard? Such stinginess regarding playing time for developing players no doubt has created a national awareness which affects the Jayhawks adversely on the recruiting trail. We are almost out of games in which to develop Naadir prior to important league contests. Yeah, I am aware that if he is pitched into the lineup for major minutes, and we lose to USC, there will be a bundle of posters clamoring for my neck. But I am just as likely to shriek, "I told you so" when TT or EJ are not available for a stretch run vs. Iowa State in a game we lose at AFH. Unless the kid is too retarded to follow the simplest of instruction, PLAY HIM NOW!

Tharpe is being "developed" every day in practice. Actually, the entire team is still being developed as they have a long way to go to be competitive with top ten teams. Until the best and most experienced players can learn to play together there is no need to put even more players in to learn the game. I felt the same way about Johnson, but he still is not a consistent player at the major level. Self is trying to win games now and he will always play the guys who he thinks have the best chance to do that. If Tharpe proves he is ready in practice then believe me the coach will put him in.

You make good points, bobbysfissure. REHawk is following the principle that the most popular person on the team is the backup quarterback, i.e., point guard.

No bashing here. I fully agree.

Glad TT is recovering/recovered from his surgery. Keep the faith and bear down TT. Be the leader you are capable of being. The team needs you and we all need the team,

Winning games now is a fine aspiration, obviously not to be dismissed as a hohum goal for Jayhawk basketball. I have almost always been a fanatic about striving toward league titles. In my view, the five players who started last night are not going to get that done without dependable help which has gained confidence from real game experience. Tharpe might turn out to be a dud. What I have read about him, and what I witnessed from his early Jayhawk playing time was that he might bear the freshman talent to be a serious change-up to be hurled at a defense which has grown comfortable taking the ball away from our starters or laying in wait for our starting guards to loft assists designed for ESPN highlight reels. I would like to see new blood flowing through the point, at least occasionally. Tyshawn and EJ are tremendous talents, but sometimes deserve to be harnessed or offered recuperative minutes to refocus their games. If one of those two goes down to extended injury in the middle of league season, we suddenly are faced with playing catch-up with a very green backcourt lineup. Granted, I view last night's Tyshawn/Naadir playing time through a mirror, knowing that we lost the game anyway, so why risk the one while wasting developmental opportunity for the other. In my opinion the games this week and next are not nearly so important as a future win against even the lowliest of conference opponents. Right now, the overall strength of this team at the 1 and 2 positions represents the shakiest situation for future success. Unless the thinking is that Releford can move down to fill in adequately for TT or EJ, then Tharpe is being wasted.

Your point would be valid if, overall, practice and an actual game were the same thing. REHawk is absolutely right. Regardless of the situation in practice, getting Tharpe game "reps" is best for him and the team. Given the current roster, that's the way it has to be. Self can't complain about lack of depth and not develop and use the depth he has simultaneously, not logically anyway.

You stated: "Until the best and most experienced players can learn to play together there is no need to put even more players in to learn the game. I felt the same way about Johnson, but he still is not a consistent player at the major level."

It's a pattern, Johnson averaged 6.6 mpg his freshman year, and 13.7 his sophomore year. Self and fans alike expect that doubled and efficiently? Tharpe currently averages 8 mpg. Depending on how the pg potential recruiting shakes out, Tharpe will not get much game time next year. If and when he gets in, later in his career, we will see similar uncertain play because he lacked game experience.

As far as "learning" goes, it never stops. Sometimes the best and most experienced players need to learn some things from the bench. On the other hand, the others who lack experience need game time to learn.