Kansas guard Travis Releford rejects a shot by Florida Atlantic guard Omari Grier during the second half on Wednesday, Nov. 30, 2011 at Allen Fieldhouse. 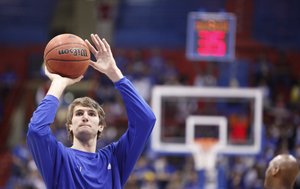 Florida Atlantic coach Mike Jarvis had one lament in his opening statement following his team’s 77-54 loss to Kansas on Wednesday.

“I would have loved to have had a closer game,” Jarvis said. “We had a couple of chances to maybe knock it into the single digits, and it would have been fun — a lot more fun. But it’s a great experience coming out here and playing in this incredible facility in front of these incredible fans.”

After jumping to a 9-3 lead just 3 minutes, 47 seconds in, the Owls couldn’t keep up with the Jayhawks because of poor shooting.

The 13 blocked shots also tied for the seventh most in a Div. I game this year.

“The difference is in the reach,” Jarvis said, “and if you’ve got athletes with reach, then you’ve got a very difficult time.”

“Coach was telling us, ‘Just key in on him,’ but it’s easier said than done, because he’s a load,” FAU guard Dennis Mavin said. “Everybody knows all his accolades, and he’s an All-American guy.”

Jarvis was impressed with the KU junior forward as well, calling him one of the top prospects in college basketball.

Hard to argue with anything in this article.

I don't really get the animosity against Keegan. I've been coming here for a fairly long time..a lot longer than April of this year and usually enjoy his articles, regardless if I agree or disagree. Not being a smarta**, just curious.

I thought the same thing about Thomas and the numbers 20-20. He is on a cycle for monster games.

Thomas Robinson is a force this year. Hopefully he will help us forget about losing the Morris twins. If TR shots 70-80 percent from the free throw line every night he should average 18+ pts and 12+ rebounds a game.

Could that be the worst combined shooting night of all time?

Does anyone track the statistic of worst combined shooting night of all time?

I want to know.

The statistic should be a composite weighted among the three scoring categories.

Yeah, I've always really liked Jarvis and thought he was a class act. It would be nice to see him get a chance at a big-time program some day (I mean more big-time than St. John's).

Thanks for the site..add in Ben McLemore and you have a lot of quality players who will stick around 3-4 years. Backcourt looks set, a solid 4 would be nice.

Was White going to commit on the 28th or 29th of November?