It takes more than one quick defensive end to put pressure on a quarterback. 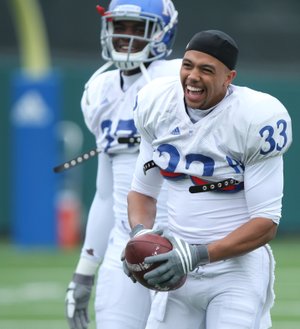 KU tight ends coach Aaron Stamn talks it up with his players during pre-practice drills on April 25, 2011.

But let’s not get greedy here. This is the Kansas University defensive line we’re talking about, and it’s been so long since the Jayhawks have mounted much of a pass rush, it’s at least encouraging to know that all signs point to one defensive end progressing to the point he’ll be a handful for opposing blockers.

Toben Opurum, a running back a year ago at this time, spent his sophomore season in transition, moving first to linebacker and then to defensive end. The upbeat, smiling, confident freshman gave way to the sophomore standing behind a wall of unwelcoming vibes. After Friday’s practice, Opurum’s smile had returned and so had his confidence.

“Toben definitely has made a lot of strides, which is kind of what I expected,” KU coach Turner Gill said. “He’s a lot more smooth in what he needs as far as technique, and he’s coming out with a lot more speed.”

KU’s most talented cornerback, Greg Brown, knows a secondary is only as good as its D-line’s pass rush, so he tends to spend breaks during practice taking that unit’s temperature.

“The D-line is doing much better,” Brown said. “Toben Opurum is coming off the ball, jumping counts, getting a lot of sacks, two sacks a practice. He’s moving, and he’s moving fast. He looks just as good, even better, at D-end than he did at running back.”

Opurum, a 6-foot-1, 240-pound rising junior, said he has studied a lot of tape of Texas A&M’s Von Miller, projected to go as high as third in the NFL Draft. Miller, a pass-rushing outside linebacker/D-end in college, worked under assistant coach Buddy Wyatt for part of his A&M career. Wyatt now is Opurum’s position coach. Miller weighs about the same as Opurum and is two inches taller.

“As far as an ideal defensive end, they’re usually taller than me and maybe even a little bit bigger, but with me being smaller, I’m also quicker, so while I’m not a prototypical defensive end, I’m able to get things done,” Opurum said. “I’m a lot stronger than what people realize. I’ve got the strength of someone who’s much bigger than me. Combining that with my speed, I think that makes a good combination.”

Opurum said he’s moving better than ever and added that he has the highest grades this spring of any player on the defense.

• KU assistant basketball coach Joe Dooley has more than a playing career at George Washington University during which he was a two-year starter and a team captain as a senior going for him in his quest to land the head-coaching position at his alma mater. He also has former KU athletic director Lew Perkins in his corner. Dr. Robert Chernak, senior vice president of student and academic support services, wields a great deal of influence at GW. Chernak and Perkins go back a long, long way, and Perkins is high on Dooley.

I've always been impressed with Toben and all this article does is elevate that impression of him. He's going to be fun to watch this fall wreaking havoc in opposition's backfields!

Keep it going Toben! Sky is the limit for you!

He watched tape of the right guy in Miller, hopefully it translates into success for both Toben and KU's D.

You copied and pasted the Joe dooley paragraph to the wrong article.

Oh not me, the paper. hahahahahaha

I know we are a basketball school but...

I'm not saying this just to be negative... but it is negative.

If Toben Opurum is getting 2 sacks a practice... how many sacks will our line give up in a game?

I thought the same thing. Hopefully it is a case of Toben being a stud, and not the O-Line being awful. Last year when Toben made the switch I had visions of TCU's Jerry Hughes destroying quarterbacks and leading the nation in sacks. Similar backgrounds (Hughes was a running back in HS), and similar sizes. It's spring football, we're allowed to dream big.

Perhaps he's going against the scout team, not the 1st string line.

In high school, the guys with all the talent, the guys with the most speed, play the most important positions. In college they have to beat out 4 or 5 guys that are as good as they are. Everybody can't be RB or QB. But that always leaves several players who could've been highly rated at another position coming out of HS.

Toben, by the way, was a 4 star fullback. Nobody had him as a 4 star RB, and certainly nobody recruited him as a DE. He had some delusions of granduer partly because in HS, he was the man, so he played RB. He wanted to keep that rolling. If he had gone to a power program as a FB, he might have stuck in the backfield, but he could easily have been switched too, after the coaches saw the potential.

If he had played DE all through HS, who knows what he might have been rated at that position. DEs who can run a 4.5 40 certainly have a shot at being a handful for a OT. Especially if he's able to run around them, or get up under their pads and out-leverage them.

The NFL right now is loaded with DE/OLBs. His size and style slide him squarely in the trendiest position in football over the last 5 or 6 years. Dwight Freeney changed the way people look at DE, and he has almost the exact same measurables as Toben. Same height, same speed, soon to be (I would guess) same weight. Robert Mathis is Indy's other DE, in the same mold as Freeney, and Jerry Hughes is in waiting behind them. There is an entire franchise who believes in this type of DE. Elvis Dumervil, Everette Brown, even Wallace Gillberry in K.C. to some extent. Every team college or pro, needs a guy like Toben, so he's certainly not too small.

Toben is the man! Bring him back to HB!