Bershawn Jackson jumps a hurdle during the men's 400-meter invitational hurdles at the Kansas Relays on Saturday, April 23, 2011 at Memorial Stadium 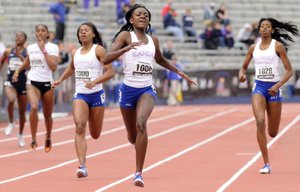 Sporting a new Batman tattoo on his upper back, the 5-foot-8, 160-pound dynamo breezed to his sixth Relays 400 hurdles title.

Battling a stiff wind to start the race, he cruised over the final three hurdles down the backstretch and finished in a time of 48.98, just off his Relays-record time of 48.32, set in 2008.

“Because of you, it’s me,” exclaimed the 27-year-old Jackson, who credits the Kansas Relays for jump-starting his career.

“It all started for me here. My first exposure was the Kansas Relays. It’s the first meet that put me on the radar,” added the Miami native, who last year won his third-straight U.S. championship. “I love Kansas. I’m always welcomed here with open arms.”

He loves Kansas so much, he felt some pressure trying to extend his Relays 400 hurdles record to six wins without a loss.

“I was really nervous,” Jackson said. “I tried to keep my composure. I never took a loss here. I want to keep it that way until I retire.”

Also adding to his jitters, “It was my season opener,” he said, noting it was an unusually cold, wet winter in Raleigh, N.C., where he lives and trains.

His ultimate goal is to win the gold medal in 2012 in London after placing third in Beijing in 2008.

“I can win the gold,” Jackson said. “I am excited. I love competing.”

“I ran a really good race last year. This one was mediocre, but victorious,” said Campbell-Brown, a native of Jamaica who ran a meet-record 22.32 last year. “I know what I need to work on. I am patient. I will keep training hard, and I’m sure the next meet will be better.”

Campbell-Brown, 28, who competed collegiately at both Barton County CC and Arkansas, will try for an unprecedented third-straight gold in the 200 in 2012.

“You never know. It’s still almost two years away,” she said. “My goals are to train hard and stay healthy.”

• Kellie Wells, one of the favorites who pulled up in the last Olympic Trials, won the 100 hurdles Saturday in a time of 12.75, best in the U.S. this year.

“That is music to my ears,” she said of the time. “We’ve been working on execution, staying calm and composed.”

n Olympic silver medalist Lauryn Williams won the 100 in 11.10. It’s the second-fastest time in the U.S. this year. She’s off to a great start this season after taking a year off.

“I got a job at the University of Miami athletic department, skied, sky-dived, played flag football. You name it, I pretty much did it,” said the Miami graduate. “It was a voluntary year off. They say there’s a short window of time in track and field, but I wanted to try some different things.”

• Antwon Hicks won his third Relays 110 hurdles, finishing in 13.35, fourth-best time in the world this year.

“I always run well here for some reason,” Hicks said. “The competition was pretty stiff.

“I’d give it a C-plus,” he added of his effort. “I’ve still got to work on some technical things for later in the year.”

• Ivory Williams successfully defended his 100 title, crossing in 10.05, second-best time in the world this year, first in the U.S. He ran a Relays-record 9.95 last year.

“It hurt a little bit. All I tried to do was run my race, stay focused and finish the race,” said Williams, who had some hamstring problems on a chilly day. “I slowed with 30 meters to go because of my hamstring.”

Um... nice headline. I wasn't sure if it was supposed to sound like the Six-Million-Dollar Man or a Will Smith song. In retrospect I suppose it's neither, but isn't Batman, either.

Thanks for the coverage of the relays.

Much better than the ignorant comments.