Former Jayhawk Scott Russell competes in the javelin in the Kansas Relays. Russell won the event for the eighth time with a meet-record throw of 268 feet, 11 inches on Friday, April 22, 2011 outside of Memorial Stadium. 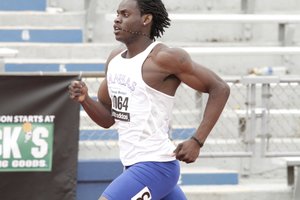 There’s only one thing Kansas University senior pole vaulter Jordan Scott must do to become a contender for the 2012 Olympics and beyond.

“I think he needs to get a hat, cover up that hair a little bit or shave it off,” joked elite U.S. vaulter Jacob Pauli, fifth-place finisher at the 2008 Olympic Trials.

“He’s working with one of the best coaches in the United States in Tom Hays. He’s tall (6-2), strong and fast. He only needs experience in big meets.”

It’s a good time to be an up-and-coming vaulter.

“There’s a huge gap in in the men’s pole vault in the United States. It’s becoming a topic around the world,” Pauli, 31, said. “We used to be the top two medals at every Olympics, and we were eight-deep. In 2004, I jumped 19 (feet) for the first time, and I was No. 10 in the United States. Since then, some of the older guys have retired. The younger guys haven’t come. Jordan is one of a couple guys people are looking to in the next few years to be ‘the guy.’”

Scott — he tied Michael Viken and Pauli, winning on fewer misses — was the most noticeable of all competitors because of his crazy coloring.

“That’s just Jacob. He’s jealous,” Scott, last year’s NCAA Outdoor vault champion from Watkinsville, Ga., said, responding to the joke about his scalp. “I took a break from dyeing it the last few meets. I’ve been working on some things and didn’t want to draw too much attention to myself when I’m not going to jump that high. But for the KU Relays, I had to bring it back.”

Scott, who has a personal-best leap of 18-8 3⁄4, is hoping to turn pro following this year’s NCAAs. He’s glad he has the endorsement of Pauli.

“I’ll have to go thank him. That’s definitely one of my goals,” Scott said of the Olympics. “For it to actually happen, it will take a lot more hard work.”

Competing for Canada, Russell placed 10th in the Olympics in 2008. Now a 32-year-old middle-school teacher in Baldwin City, Russell, who wore his old pink and blue KU jersey Friday, had been injured the last two years.

“This was just to see how I do,” said Russell, who outdistanced KU freshman Johann Swanepoel, who threw 241-6, fourth-best mark in KU history. “Now I have to train for London (2012 Olympics) if I can do this. I shouldn’t have thrown this far with as little as I’ve trained.”

“I just want to keep throwing PRs and getting better all the time,” he said.

“My goal is the national championship,” said Finley, second in the NCAA shot and discus his freshman year. “I can get a little more consistent. I have form to work on.”

The phrase should probably read "Scott, Michael Viken and Pauli, each cleared the same height, with Scott winning on fewer misses."