Another Penny turns up 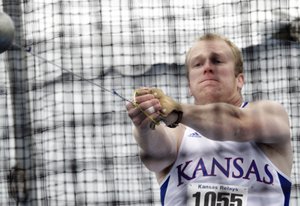 Although much is made of the Kansas University athletic department turning into quite the money machine in recent years, a closer look reveals the truth: A generation doesn’t go by where the department is Penny-less.

Junius Penny went from Lawrence High to KU, where he played football. His younger brother Charlie came to KU to play football and basketball. Charlie’s football career was cut short by an injury that, according to his nephew, left him convulsing and left spectators wondering whether they were witnessing a death. Charlie survived to earn three varsity letters playing basketball for Phog Allen.

Junius’ son and Charlie’s nephew, Bill Penny, came to KU from Emporia High, where he won the state title in the discus and placed second in the shot put. At KU, Bill quickly learned he couldn’t compete with a couple of classmates and switched to the hammer throw, an event in which he placed third in the NCAA Championships.

But a University of Oregon graduate who is a student at KU Medical Center using his remaining year of eligibility to throw the hammer for the Jayhawks in the Kansas Relays?

True enough. Scott Penny, former standout LHS football player, two-time state champ in the shot put and a state titlist and runner-up in the discus, competed Thursday at the corner of 11th and Mississippi.

A gathering of about 20 people, including former KU basketball player and second-year med student Christian Moody, showed up for to root for Penny, the second of the third-generation Jayhawks.

Scott, brother to Nate and Jon, had his father’s old pink uniform in his duffel bag.

“I would have worn it, but I don’t think adidas would have liked that,” Penny said of KU’s and the meet’s apparel sponsor. “I decided not to step on any toes.”

Penny finished fourth with a hammer throw of 187 feet, seven inches, and still ranks second in the family to his father. Scott’s best throw, which came at Oregon, was roughly 198 feet, about five feet shy of Bill’s best.

If the son passes the father, it will rank as quite a feat, considering the demands on his time as a medical student who commutes 45 minutes each way “two or three times a week” to throw with teammates and does the rest of his training at the rec center at KU Med Center.

Before Thursday’s competition, Penny’s old high school football coach, Dirk Wedd, greeted him: “What in the world are you thinking? You’re a med student, and you’re throwing a hammer?”

Retorted Penny: “Coach, everyone has hobbies.”

Playing guitar is another of Scott’s hobbies. The Renaissance Man of Bill and Marlene’s family also has tried his hand at acting in a Shakespeare play while a student at Oregon.

Those hobbies had nothing to do with this cold, gray day that was all about a father and son’s love for each other and for the sport of track and field.

Very nice article about a great KU family. I love Relays time because of all the coverage that Track and Field gets. KU has a great tradition in its track teams and in the Relays. Keep em coming!

"I’m going to try really hard to answer this without using a pun. My late friend Mike Penner, who for a while penned his Los Angeles Times column under the name Christine Daniels before switching back to Mike Penner, used to refer to puns as 'the lowest form of communication.'"

Of course, in Keegan's defense, Dave Armstrong just recently bequeathed to him a warehouse full of left over cheese.

What would Armstrong say to this particular pun?