A time lapse of construction crews transforming the intersection of Eighth and New Hampshire streets for the Men's Shot Put event of the Kansas Relays. Music provided by Captainstupidity. 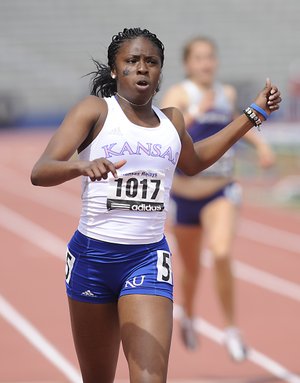 Everything has to start someplace. Historians will note that the revival of track and field in the United States began Wednesday, April 20, 2011, right here in Lawrence, on Eighth Street, 80 feet or so east of New Hampshire.

And about 2,500 curiosity-seekers can say they witnessed it.

The guys who will bring back the sport’s popularity won’t do it on fields inside the boundaries of all-weather tracks. They’ll do it at venues built for a day at downtown sites, just like the one constructed Wednesday and scheduled for dismantling this morning.

Shot putters are easy to spot. They’re the men whose arms make Popeye’s look like twigs. They have tree trunks where most men have necks. Not only that, they have personalities. They like to tell their stories, enjoy signing autographs and even openly recruit spectators to pump up the volume. Think Tiger Woods. Now think total opposite. They’ll be the guys to bring back the sport by taking it to the people.

Credit Kansas Relays director Milan Donley for coming up with the idea of having the nation’s first downtown shot put — inspired by the success of similar European shows — and for joining hands with the city of Lawrence to seamlessly execute a smart plan.

If I could have lost a pound for every time I heard while having a nice sidewalk dinner on Mass Street someone say what a great time they had at the shot-put show, I could start training to run in marathons today.

Kudos to the world-class field for accepting smaller appearance fees (the highest were $8,000) and a smaller purse ($1,000 to winner Dylan Armstrong) than they get in Europe. The pay will grow in step with the popularity. These guys get that.

People stood eight- to 10-deep along both sides of the street. Spectators from nearby buildings opened second- and third-story windows to take in the action.

Such a smashing debut means sponsors will line up to back the event a year from now, should Donley manage to pull it off again.

The crowd, which at first didn’t understand that it didn’t have to behave as if it were witnessing Tiger standing over a three-foot putt, was brought out of its shell by Adam Nelson, the veteran whose trademark is to rip off his warm-up shirt before every put of the shot. He exhorted the spectators to get louder by cupping his ear and raising his arms.

One man catching the action from a second-story window rooted loudly for the aptly named Armstrong — his right arm is strong — and at one point hollered, “Throw it like it’s a ping-pong ball. Wait a minute, a ping-pong ball wouldn’t go very far. Never mind.”

Later, that same man could be seen getting Armstrong to autograph one of the three $5 bills he won by selecting the winner in an impromptu draft he had with a couple of buddies. After about the fifth time the man said, “Thanks, Adam,” Armstrong finally corrected him: “Hey, man, my name is Dylan.”

Oh well, while knowledge lacked, passion did not. As for vibrant downtown Lawrence, it made for the pluperfect place for Day 1 of track and field’s return to prominence.

Yes, props to the Mr. Donley for a well conceived idea and well executed event. When held in Memorial Stadium, the shot never received much attention as it was either held near the endzone or outside the stadium while other events were taking place. Never has the shot at the Kansas Relays drawn such a large and enthusiastic crowd,.

The Kansas Relays used to be a major event. Would love to see it return to its former glory. Its great for Lawrence and downtown, great for KU and great for Track and Field.

awesome! wanted to be there, definitely will be there next year......

Yeah, I had to read that sentence a couple times too.

Why is it people feel the need to critique the writing of the LJ World Staff? If you think you can do a better job, do it.

ilegler86 asks why people feel the need to critique the writing of the LJWorld staff. Because newspaper writers -- and especially editors, like Keegan -- are supposed to be professionals. Newspapers are just about the last defense we have for protecting the English language and the written word. The Journal-World has been, mostly, a professional publication. Newspapers around the globe are failing, and many of us find that incredibly alarming. When newspapers are gone we'll be left with ... TV journalism and Internet journalism. I, for one, will fight on behalf of newspapers until the day I die. And that includes pointing out mistakes and sloppiness when I see it. Because I like to think that the people who run our hometown paper take pride in their work and are open to a little constructive criticism.

If you actually want to get changes made on the pages here, look at the very bottom of the page. You'll find a suggestion box. Editors, especially Keegan, RARELY read the comments on their articles. However, they regularly check comments people leave below. It's the fastest way to get errors, such as sloppy sentences or comma omissions, fixed. Also, it doesn't call the writer out in front of everyone else. Mistakes are made, no one is perfect. A lot goes in to writing a column every single day. I'm not defending Keegan, per se, just pointing out a better way to get your editing ideas across. I like your pro-newspaper stance.

Curious how the turnout of 2500 was viewed by the organizers...expected or otherwise?

Good grief, Keegan.. How many articles are you going to write about this? I think this is the third, if not fourth. We understand. The shotput is downtown. You think it's cool. Enough already.

I am kind of glad that Keegan wrote a couple things about this event because it did help to get me down there. And I was glad I did because it ended up being a really cool event.
I also agree with Keegan that it can only get better if they continue this. The crowd will get louder and bigger and downtown was packed afterward with people walking around and eating dinner. The organizers may end up needing to do something to help the spectators see (temporary bleachers or something) because that was a challenge at times, but I am guessing they just didn't anticipate the size of the crowd.

This event was so much fun. The weather ended up being perfect. The little ones chased Big Jay all over the street and enjoyed the bounce house (and we parents enjoyed the fact that the bounce house was FREE, btw). The only thing that could have made it better would have been bleachers or something to open up the view a little bit. Couldn't really see the putting of the shot. We walked on down to Freestate and enjoyed some dinner after it was all over. All said, a really great evening. Thanks to the people who spent the time and effort to put it together, and to the group of what appeared to be KU athletes who were there volunteering.

And everyone should remember that the long jump will be held downtown tonight at 6pm too. Hopefully that will be as cool.

I like the shot. But the long jump.... it's way kewler. Those guys sail nearly thirty feet. Should be fun.

I have thoroughly enjoyed reading the articles and watching the videos about this event, and think it was a great idea. I would have attended if I didn't have an exam.

I did have one negative thought while watching the video of the winning throw. What if one of those 16 lb. balls was accidentally tossed into the crowd of old spectators and children. Seems like someone could get seriously injured, or even killed. Maybe there is some way to put up a protective netting or clear shield.

I'm already looking forward to seeing this in person next year.

Thanks for the articles and the videos... I want to read and watch more about this event!! I would LOVE to bring the family next year if they do it again.

One idea... how could would it be if the high school contestants could qualify for a finals in downtown! I bet they'd talk about that experience more than going to the state meet. Though I realize the timing would be different from when they compete versus the elite athletes... and you don't really want to leave the pit there for several days.