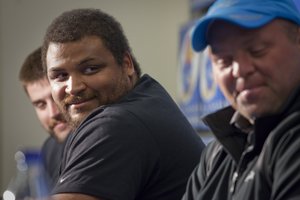 Reese Hoffa, center, ranked No. 2 in the world, and other elite shot putters speak to the media to discuss Wednesday’s downtown competition. The event will be held at 6 p.m. on Eighth Street by Mass. and New Hampshire. 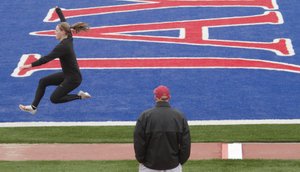 Everybody has witnessed live events that take up permanent residence in the memory.

Playing on the road for Cal-Irvine in 1987, Scott Brooks torching University of Pacific, the local school that didn’t offer him a scholarship.

Kirk Gibson hobbling around the bases after his one-legged home run in Game 1 of the 1988 World Series.

Neil Young’s guitar talking to me for nearly three hours April 30, 2009, at the Sprint Center.

Another evening that has a chance to rank as a memorable diversion from the routine takes place in Lawrence today, beginning at 6 p.m. and concluding somewhere in the neighborhood of 7:30.

A world-class field of shot-putters will bring an electric intensity to the air in front of the Sandbar and all the way into the intersection of Eighth and New Hampshire, where the 16-pound steel balls they put will land in a pit packed with limestone. City crews were scheduled to start setting up for the event early this morning and will remove everything carted in for it Thursday morning.

Adam Nelson, a 1997 Dartmouth graduate and a a two-time silver medalist in the Olympic Games, has competed on a world stage since graduating from college after a career as a football (linebacker, then defensive tackle) and shot-putting standout.

Too often the strong men of track and field have done their thing on a field in the background of the track where most eyes are trained. Having the chance to do it in such close proximity to the crowd, on a downtown street, makes this not just another competition for the world’s 10th-ranked shot-putter.

He knows what of he speaks. He has competed in several such events in Europe.

“The crowd’s awesome,” Nelson said. “It’s like a rock concert. It really is. It’s really high energy. It takes the action to the fans.”

“I’m the light guy here at 262 pounds,” Nelson said. “We have guys up to 350 pounds. When you see guys who are our size, moving the way we do, throwing a 16-pound steel ball the length of a bowling alley, it’s pretty awesome, and the only way to really appreciate that is right up close.”

The best rock concerts have the crowd and musicians driving each other’s energy levels up.

“All of us will work the crowd because, obviously, we feed off the energy of the crowd, and it really helps us get a big result,” said Nelson, who makes ripping off his warm-up shirt part of his routine for psyching himself up to throw. “We’ll bring the crowd in as much as possible because it really can help push you to another level of intensity and focus.”

The competitors won’t be the only ones to feel the intensity.

“I can promise you,” Nelson said, “they will remember it for the rest of their lives.”

Just curious if anyone knows if there were will beer vendors for this event? Will there be any food vendors?

i read somewhere that sandbar has a temporary street liquor license for tonight.