Is Kale Pick the next Kerry Meier?

Kansas University junior Kale Pick is getting pretty used to being compared to other people. 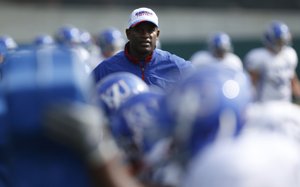 New Kansas assistant coach David Beaty instructs his position group while the wideouts run through drills during practice on April 18, 2011.

Last year, as he fought to claim the starting quarterback job for the Jayhawks — which he lost three quarters into the season — Pick often was compared to Todd Reesing, a mobile quarterback who could beat teams with his legs as much as his arm.

Now, Pick’s being compared to another former KU great — Kerry Meier. The reason? After being benched in KU’s season-opening loss to North Dakota State in 2010, Pick never again played a meaningful snap at QB. By season’s end, he was moved to wide receiver, and, like it or not, began following the same path Meier took after losing the starting QB job to Reesing in 2007.

This spring, Pick has made the switch to wide receiver a permanent thing, and, so far, he has made quite an impression at his new position.

“Kale Pick’s doing real well,” KU coach Turner Gill said recently. “He’s probably had as good a camp as anybody this spring. He’s making plays every day, he’s very consistent, a hard worker, he has very good hands, and he understands what to do and how to do it.”

Sounds a little like Meier, doesn’t it? That’s not a problem for Pick.

“I don’t get tired of it,” he said. “That was kind of the talk last year, with Reesing, when everybody was saying, ‘Who’s gonna replace Reesing?’ so I’m kind of used to that. I don’t mind it. It kind of gives me a goal and something to reach for.”

Speaking of reaching, Pick reached out to Meier this winter to pick his brain about what to expect from the transition.

“I called him over Christmas break,” Pick said. “And he just talked to me about some of the stuff I need to work on, kind of the basic stuff to get started. It was a pretty quick call.”

That’s fitting because Pick has been quick to pick up the transition to receiver, too. Last year, Pick appeared at wideout in just a handful of games. He made three catches for 18 yards, including a long reception of nine. Despite his limited exposure at the position, he has welcomed everything the coaches could throw at him this spring — literally and figuratively.

“Things are going good,” Pick said. “I think I’ve caught on pretty quick, but I still need improvement in my route running. I think it’s been a pretty smooth transition. In the back yard growing up and stuff, we’d always play around, and I was used to catching the ball.”

So, what routes has the former quarterback specialized in this spring?

“Basically all of them,” he said. “A lot of streaks down the middle and down the hash marks, and then I’ve got digs and corners and the short stuff, too.”

Which one has been the hardest to pick up?

“I really don’t have a hardest right now,” he said. “I’ll have to think about that.”

Pick credits some of his early success at the new position to an old friend, wide receivers coach David Beaty. Beaty was with the Jayhawks when Pick was recruited to KU and returned this offseason after a one-year stint at Rice. The fact that Beaty was one of the guys who helped turn Meier into an NFL Draft pick at wide receiver has not slipped Pick’s mind.

It’s funny, but that’s kind of the feeling teammates have about Pick, who many thought might explore a transfer in the offseason.

“The coaches are just trying to put guys in the right positions to make the biggest effect on the team,” sophomore QB Jordan Webb said. “In Kale’s case, he’s definitely going to excel at receiver. He’s fast. He runs good routes, and he’s going to block, too. I’ve had a lot of fun throwing at him.”

Instead of worrying about finding a new place to play, Pick said he spent the offseason bulking up in order to be ready for his new role. He emphasized his upper body in the weight room and is hoping to add 10 pounds to his 6-foot-1 frame in order to reach a playing weight in the 215-218 range. That, he said, would allow him to be a more punishing blocker while also making him a bigger target for the KU quarterbacks. Pick admitted that every once in a while, he caught himself looking over at the guys in the red jerseys and thinking back to his days as a quarterback. Does he miss it?

“A little bit, yeah, I do,” he said. “But I started to like receiver quite a bit this winter. I got a lot of reps, and I’ve got timing and chemistry with (Webb and Quinn Mecham). I’m starting to like receiver a lot more than I expected.”

Pick and the Jayhawks return to the practice field Wednesday afternoon for the 11th practice of the spring. Spring ball wraps on April 30 with the annual spring game at 1 p.m.

Very positive to hear how Pick is progressing in his transition to receiver. I'm sure it wasn't easy after having your focus on being the starting QB, but admire how you are handing it, Kale. I have a feeling you are going to do quite well at WR and in life with that kind of attitude.

isn't this what we all said about him at QB?

Said what about him? Who is "we" in your statement? Have a mouse in your pocket?

pb - I'm recalling comments about Kale's great speed and running ability shown the previous year subbing for Todd, while hoping that his passing game lives up to some of the recruiting hype as a starter. Unfortunately, it didn't workout in a very short trial as starting QB. Glad he is embracing the move to WR. Wasn't Kerry still thinking of himself as a QB playing WR as a jr/sr?

Raymond Berry: "If you can touch it, you can catch it." Sometimes, throwing AT a receiver is not a bad thing to do.

I hope this guy has the pass catching ability that Kerry Meier had. You definitely didn't have to hit Meier between the numbers, just get it into the vicinity.

I was thinking a similar thing. I wonder if QBs develop those hands from all the warm ups they do. Literally just playing catch with another QB or coach. The endless repetition of catching a simple toss with your hands.

They are also coached on how to hold the ball in the pocket. Two hands tightly gripping the ball, with the ball up high at the chest. You need to develop strong hands to keep from being stripped of the ball like that. You see that skill set translate from basketball players too. Tony Gonzalez spent a couple years playing power forward at Cal. Guys are constantly trying to slap the ball out of there when you get a pass in the paint. We all know how that worked out in the NFL.

Can we just recruit wide receivers. Why are we constantly doing this?

I think that's our problem... we need to recruit less athletes and more football players.

We did. Keeston Terry. He plays safety now.

I'm not sure what less athletes and more football players means. I always thought when a coach said "He's just a football player" he meant he would be good anywhere you put him. Which is why rivals and scout and others rate players so often as "athlete".

I think it's a proven method throughout college football. Not just here.

Besides, we actually have recruited receivers coming out of our ears. Marquis Jackson, JaCorey Shepard, Ricky Herod and Brian Maura will be fighting for PT against Chris Omigie, Erick McGriff and Andrew Turzilli. That's not enough for yah?

I think I see your point, however, especially with this age of kids, things have the propensity to change, i.e. physique, size, speed, etc., so change may not only be inevitable, but also desirable. There are a lot of college athletes that change positions (in sports) once they get in school.

Are we using Kale at wide out because he's that good or are we using him at wideout because we need a wide out. I'd have no problem if the guy turns out like a Kerry Meier but that was an extremely rare case. Unfortunately I believe we are using him because we are lacking in that area.

He's not going back to QB anytime soon.

I heard Pick is the top competitor and one of the top athletes on the team. I wish him well,and hope KU can turn it around.

I still have Kerry's Sports Illustrated cover (November 2007) on the wall in my office at home. If Kale can be like Kerry, go for it Kale. Good luck to you, man! Rock Chalk Jayhawk!

One of the greatest Wide Receivers of all time Jerry Rice played Quarterback in high school and then switch to Wide Receiver in college. If Kale Pick is a better WR than QB then that is the position he should play. There is even college QBs that get drafted to be Wide Receivers in the NFL. Who cares what position your were recruited to play. The most important thing is to find the best position and excel at it.

And maybe Web is the next Tod Reesing... Rolling my eyes.

Who's Web? Is he a new quarterback? The only one I know of is Jordan Webb. Anyway, the Kale/Kerry comparison is fine enough, hopefully he can deliver. First thing's first though, he needs his catching form to be proper, he still is ready to receive a snap in the picture, doesn't have the diamond pattern.

While I am sure Kale Pick is a great kid, let's make no mistake....Kerry Meier is a one of a kind in so many ways. Going from QB to WR does not make Kale Pick a Kerry Meier. I am sure it was just a nice comparison from a position standpoint for the article. However, having gotten to know Kerry well, this comparison based purely on position seems to diminish so much of what makes Kerry Meier great.

I have to agree, there is no such thing as, "the next" with anyone.

Remember "Baby Jordan"? Not so much, sorry Harold Miner The next John Elway? Sorry Jake Plummer