Marcus and Markieff Morris are in agreement on which NBA team they'd like to play for. The two spoke to reporters on April 11, 2011, after the KU men's basketball banquet.

Marcus and Markieff Morris, who declared for the NBA Draft last week, talk about the impact KU has had on their lives following the KU men's basketball banquet on April 11, 2011. 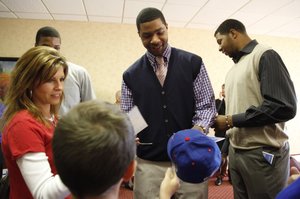 Kansas University senior guard Tyrel Reed was named winner of the “Danny Manning Mr. Jayhawk Award” at the conclusion of Monday’s basketball banquet at the Holidome.

Burlington native Reed received a standing ovation from a sellout crowd of 600 after accepting the trophy that goes to the player who best represents KU both on and off the court.

“This is an amazing award,” said Reed, the winningest player in KU history (132 victories). “When I grew up wanting to play for this university and just have the opportunity to wear the Crimson and Blue for four years ... it’s been a blessing and a dream come true.

“I think everyone on this team is deserving of an award like that,” Reed added. “I’m so proud of our seniors — Brady (Morningstar) and Mario (Little). They exemplify everything that this program stands for, and I am so proud of them as well. I would also like to thank all my teammates. It’s been an amazing career and an amazing ride this year.”

The banquet featured a short greeting from KU athletic director Sheahon Zenger, who told the fans to “enjoy each and every moment. There are few programs like this in the country. Embrace each and every game, every season.”

He added that, “we have the finest coach in the country.”

“When you stop and think about this team, and particularly the seniors, and what they have accomplished is mind-boggling,” Self said. “Brady Morningstar — 165 and 22 (counting red-shirt year); Tyrel Reed — 132 and 17; and Rio (Mario Little) in his three years was 95 and 14. That’s an unprecedented thing. To think that where a lot of people projected this group to finish — anywhere from second to fifth in our league — to think the level that these guys performed at all year long, spoiled us. In my opinion, we had the best team in America.”

Self admitted, “the last two weeks have sucked (since losing to VCU). When you try hard and invest in something, it hurts. Beginning tonight, it’s over (in looking to new season).”

Self told the fans: “Our goal will always be to cut down the nets on a Monday night in April. It didn’t happen this year, but I guarantee you it will happen again.”

Congrats Tyrel. And thank you for your class and the way you represented KU!

Self admitted, “the last two weeks have sucked (since losing to VCU). When you try hard and invest in something, it hurts. Beginning tonight, it’s over (in looking to new season).”

Isn't the closing parenthetical clarification (in looking to new season) sort of odd? Is (in looking back to last season) more appropriate?

I mean I really hope they are looking forward to next year. I know I am!

Thank you Jayhawks for the thrill ride, and thank you Mr. Jayhawk for all your efforts to do your best. I'll take effort over potential any day!!!

Congrats, Tyrel. You deserve this award. Idjayhawk, I am with you---I like Self's guarantee. Rock chalk!

Tyrel should have won the Lowe's award as well.

I will never vote for one of those things again. The fan vote accomplishes absolutely nothing!

I remember a similar thing happened to Todd Reesing his sophomore year. He won the on-line fan vote for a player recognition award by a landslide, however since it only weighed something like 5% of the final vote, he didn’t even make the semifinals.

The rules clearly stated that the fan vote was only worth 30% of the total score. With Jimmer on the list how did anyone really think TR was going to win? (Yes I voted, many times, but had no such expectations)

Congrats, just one more great award to add to your legacy as a Jayhawk.

Great job this season and throughout your hoops career, Tyrel. Best of luck to you in all future endeavors. You, Brady and Mario have offered KU fans a marvelous run. Your effort and demeanor should become the touchstone for all current and future Jayhawk hoopsters. It is indeed a comforting subtle thrill for the Jayhawk Nation to follow the development and pursuit of a 4 year player who is intent on championship play.

It is a great thing for a kid to want to come and play for KU because of our successful program. It is even more awesome when that kid grew up his whole life as a KU fan and is able to live out his lifelong dream to play and start for the Jayhawks!

Tyrel is extremely deserving of the Mr. Jayhawk award. He is an exceptional ambassador for what our program stands for, and I wish him the best of fortunes in all of his future endeavors.

Yeah he lived his dream and we all suffered from his lack of shooting. Great kid but maybe KU enjoys great kids but not the best of the best.

Filling in for Strikewso while he’s on sabbatical?

Self told the fans: “Our goal will always be to cut down the nets on a Monday night in April. It didn’t happen this year, but I guarantee you it will happen again.”

I can understand how frustrated HCBS is after the VCU loss.

He is getting ready. He will learn from these experiences. He will figure it out. He will get us back to the top. He will.

Thank you MR. Reed for being the epitome of a KU Basketball player. Just the fact you grew up in Kansas with a dream that you had the opportunity to achieve is great but the manner in which you did that is admirable and shows the true greatness of you as a person. May you always serve as a role model to all those that come after you as you did while playing for us. Congratulations on receiving a very special award and the recognition that reminds us what college basketball is supposed to be!

Tyrel, You go as God wills. Thank you.

Great Person never panned out as DIV 1 guard that can score. Not sure why he got starting role but whatever

I would have liked to see Tyrel get that senior award, but it's great to see him honored in this way. He's a class act, I have a lot of respect for the guy.

I would like to honor you for becoming one helluva basketball player! You flat beat out a lot of great talent and the truth is you were flat out better than the guys you beat out in every measurable way! You ran the floor faster. You had better hops. You shot the Trey better. When Self finally told you to, you got to the rim as well, even on a bad foot. You handled the ball on the dribble as well as any one on the team. You made almost no TOs. You guarded better than all but TT and more reliably than anyone on the perimeter. And you did all this on a foot that required surgery. If you had been healthy this season, you would probably have been all conference first team. You have a future in pro basketball.

P.S.: If you are willing to fight through the same resistance and doubt you fought through at KU, only more so.