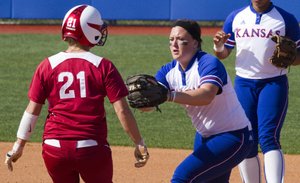 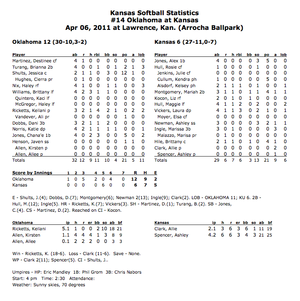 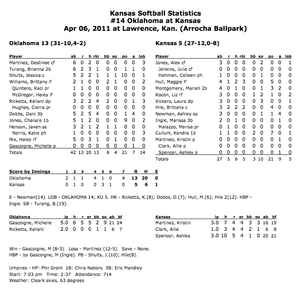 There’s plenty to be said about the Kansas University softball team’s tenacity.

But there’s plenty more to say about what has gone wrong for KU since conference play started March 3.

Though the Jayhawk offense busted out of a recent slump, none of KU’s pitchers were effective from the circle.

Kristin Martinez lasted only three innings in Game Two, and neither Clark nor Spencer could hold back the potent Sooners (31-10, 4-2) in relief.

After smashing nine hits in Game One, OU teed off for 20 in Game Two — including five from Dani Dobbs and a grand slam from Keilani Ricketts, who also pitched five scoreless inning with 10 strikeouts to earn the win in the opener.

“We knew pitching was going to be a work in progress this year,” KU coach Megan Smith said.

Down 8-0 in the first game, KU staved off being run-ruled with a six-run fifth inning — highlighted by a two-RBI double by Maggie Hull and a three-run homer by Laura Vickers.

The same scenario played out in the second game, where, down 9-1 and facing being run-ruled, KU struck for four straight runs — a three-run homer by Maggie Hull and a solo shot from Hile, who also homered earlier.

0-18 is a real possibility. that would be sad, with the kind of pre league season we had. c'mon ladies! let's get on the board in the league.

Lizzy #9 and Hull are the only athletes on this team. You have slap hitter that can't hit. Leadoff hitters that have no OBP%. And an arrogant coach that does not make and effort to connect to local talent or fans. Looks like a bunch of burned out players that are going through the motions. Well at least the First Base coach is smokin' hot!

Go watch a practice. A select few are getting the chance to work, while the rest stand around. The coaches are not developing a program or players.