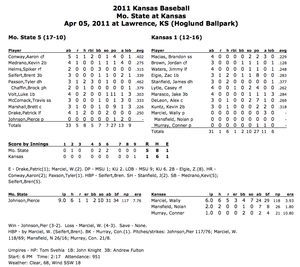 “The quality of our at-bats was really poor,” Price said. “It’s as bad of an offensive performance as we’ve had in a long time.”

The Jayhawks now have scored one run or fewer in 10 of 28 games this season.

“If Waters and Lytle and Macias don’t hit, we’re not going to score,” Price said. “We’re not talented enough 1-9 in our lineup for that to take place, and that’s a reality. I’m not being negative. That’s a reality. Those guys have to hit, have to produce with runners in scoring position or we’re going to be offensively challenged.”

KU was part of a breakout performance by Missouri State starter Pierce Johnson.

In his previous two starts, Johnson had allowed a combined 14 earned runs in just 81⁄3 innings. He also came in with an earned-run average of 10.48.

He didn’t look the part of a back-end starter Tuesday.

The right-hander — who was drafted in the 15th round of the MLB Draft by Tampa Bay in 2009 — allowed just one run in a 117-pitch complete-game effort; his previous career-high was six innings.

Johnson also struck out 10 — topping his season-high of five — while walking just one. He became the first pitcher to record 10 strikeouts against KU since 2009.

The sophomore found success by getting ahead with fastballs on the outside corner before getting KU’s hitters to chase sliders.

“We were swinging at balls in the dirt,” KU first baseman Zac Elgie said. “It’s impossible to hit the ball when it’s almost bouncing in there every time.”

KU barely avoided the shutout, as Lytle scored Elgie on an RBI groundout with two outs in the ninth.

Johnson struck out the next batter, KU’s Jake Marasco, to end the game.

After winning five straight against Missouri State coming into this year, KU lost both of its meetings against the Bears this year by a combined score of 11-1.

“Missouri State obviously wants to come beat us, because they view us as a big dog,” Waters said. “I think we belittle too many people, and it’s come to bite us in the butt. We need to start focusing on going 1-0 every day and stop looking ahead.”

Missouri State (17-10) was led offensively by Aaron Conway and Tyler Paxson, who both homered off KU starter Wally Marciel.

Elgie and James Stanfield had two hits apiece for KU.