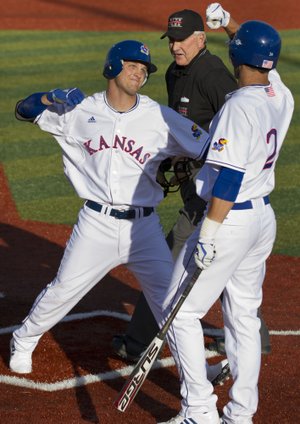 Kansas University’s baseball team enjoyed a resurgence of power on Friday, blasting two home runs in a 6-2 victory over No. 19 Baylor at Hoglund Ballpark.

“It’s been a long time,” KU coach Ritch Price said with a smile.

Eleven games to be exact. The Jayhawks — who had posted just four home runs in their first 24 games — hadn’t homered since March 11 against Eastern Michigan.

KU senior outfielder Jimmy Waters stopped that streak in the first inning, pulling a 1-2 pitch over the wall in right for his first homer of the year.

It was just the start of the Jayhawks’ power Friday.

In the fourth inning, KU junior Zac Elgie launched a two-run homer well past the left-field wall to extend the Jayhawks’ lead to 4-0.

“That was a bomb,” Waters said. “Zac’s on top of that plate, and he’s looking for that one pitch. And he got it.”

It was the third time in Walz’s last four starts he’d recorded at least 10 strikeouts.

“When his changeup’s working, he’s really tough to hit,” Price said. “That’s as good of a changeup as he’s had all season.”

Walz credited a slight change in his body tilt for increased command of his fastball, which has allowed him to stay ahead of hitters more often.

Because both groups of hitters were lumped together, Walz was able to get comfortable with his changeup before having to switch over to his slider.

Walz still needed help getting out of a two-on, two-out jam in the bottom of the seventh with KU leading 4-2.

Following his second consecutive walk — and 127th pitch — Walz was pulled in favor of KU closer Colton Murray, who coaxed a comebacker from BU pinch-hitter Josh Turley to end the inning.

After KU tacked on two runs in the bottom of the eighth, Murray worked around a walk to strike out the side in the ninth for his fifth save.

The 1 1/3 scoreless innings dropped Murray’s ERA to 1.74, tying him for the best mark on the team.

“He’s been outstanding,” Price said of Murray. “A year ago, he was trying to throw the ball through the backstop, and now he’s out there pitching.”

The Jayhawks’ six runs scored were their third-most this season. KU came in as the worst offensive team in the Big 12 with 71 runs in 24 games — a total that was 57 runs fewer than the next-lowest Big 12 team (Texas).

The victory snapped a four-game losing streak for KU (11-14, 3-4), which will continue its series against Baylor at 2 p.m. today.