A tall order: getting Wilt Chamberlain on a stamp 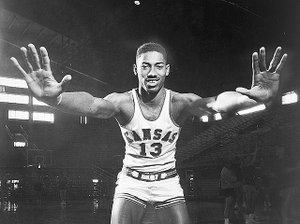 The 7-foot-1 Wilt Chamberlain played basketball at Kansas University in the 1950s.

Would you purchase a postage stamp honoring Wilt Chamberlain?

Mail in your support

Want to see Wilt Chamberlain on a U.S. postage stamp? Send your suggestion to:

A Pennsylvania lawmaker wants to team up with Jayhawks across the nation to score what he considers the ultimate honor for a favorite son who went on to become one of Kansas University’s tallest students and the world’s most dominant basketball player: Wilt Chamberlain on a stamp.

“Let’s send a strong, powerful, united message about this,” said state Rep. Ronald G. Waters, a Philadelphia Democrat. “The postal service, they’re pretty much giving it a thumbs-up, but not the final OK. Let’s get the final OK for Wilt.”

Last week the Pennsylvania House unanimously approved a resolution calling for Chamberlain to appear on a U.S. postage stamp, to honor The Stilt’s “gravity-defying” basketball achievements — including 100 points in a single NBA game, a Hall of Fame career and more — and longtime support of organizations such as Project H.O.M.E., Operation Smile and the KU Endowment Association.

The whole effort started with a newspaper column in 2008, and since has spread to Facebook, Twitter and other social media.

Ranjit Arab, acquisitions editor for the University Press of Kansas, signed an online petition for what he considers to be a slam-dunk case.

“He’s a very important American figure,” Arab said. “Not only is he a sports legend, but we in Lawrence know that he did a lot to help desegregate our city. He’s more than a great athlete. He’s a larger-than-life figure.”

Mark Saunders, a spokesman for the U.S. Postal Service, cautions that only 20 of 50,000 such suggestions make the cut each year. But supporters are encouraged to send letters — that’s right, letters — to the Citizens’ Stamp Advisory Committee, which makes recommendations to the Postmaster General.

“There’s power in the pen, so the committee pays real attention to that,” Saunders said. “We take hard-copy letters only. We’re the Post Office. Use the mail.”

Could you provide a specific address so Jayhawk fans can send letters in support of a Wilt postage stamp?

Yes, I would like to know, too. I would definitely write a letter!

Uh, it's over to the left below the photo.

Mail in your support

Want to see Wilt Chamberlain on a U.S. postage stamp? Send your suggestion to:

I'd love that stamp! I'd love it even more if he was in a Kansas uniform in the stamp. Put that suggestion in your letter when you write, Jayhawk fans. They could have a March Madness edition in March!

I'd asked Rep. Waters about that very prospect: Wilt in a Kansas uniform on the stamp. Waters said that would be great -- Kansas uniform, Overbrook High uniform, Globetrotters uniform, Warriors uniform, any uniform. There could be several images on the stamp, he said, or even different versions of the stamp. Kansas should definitely be considered, he said: "He was being drafted by a lot of colleges. He picked Kansas. He left his home state and went there for college. He did great things there."

Thanks, Shaw! Sometimes, us old KU farts need a little assistance with addresses and all. I will be writing to that address, for sure.

Wilt was the greatest basketball player ever. He had the misfortune of playing when neither college basketball nor the NBA was even remotely close to the status they have today, primarily because of the TV coverage, marketing, and media hype. Michael Jordan was no doubt a great player, but he was elevated by marketing hype to an exaggerated level that did not match his impact on the game. Only fools ignorant of the game and its history, and suckers influenced by the TV and Nike marketing machines, claim that Jordan is the greatest ever.

How many players have scored 100 points in a regular season game? One - Wilt.

How many players declared they were going to have the best average in NBA history then did it? One - Wilt

How many players chose which stat they would lead the NBA in that year [points, rebounds, assists? One - Wilt

One on one, straight up, sooner or later, Jordan would have missed a shot. Wilt would have dunked over Jordan EVERY TIME!!! No Contest!!!

I don't doubt this. But if I were to make a list of the greatest careers, I'm not even sure Wilt would be in the top 3. Wilt was no doubt the most physically imposing and talented player of all time, but he never maximized it. He never took defense seriously or cared about winning as much as he cared about stats. If you have ever read his autobiography "Wilt", even he basically says he cared more about his stats than anything else. He somehow managed to only win two championships in his career when he should have had at least 4 or 5. Contrary to what oakville says, bill russell would not have been a nobody. Russell was arguably the best defensive player of all time. Russell perfected the art of blocking the ball downwards so the celtics could start fastbreaks. Wilt was more talented than russell, jordan, kareem, and all the other players regularly mentioned among the best, but in my mind he wasn't the best because he didn't care about winning. Jordan and Russell are 1-2 because of their hypercompetitiveness in my mind. I'll put wilt at 3 just because he still managed to set so many records, but in my mind winning matters more than anything. As for the one on one game, if it was make it take it, whoever got the ball first would win.

FYI Wilt quit trying to score, except at crunch time, the last 5-8 years of his career. As a Laker in particular, he concentrated almost entirely on defense and rebounding for ex-Celtic and Laker coach Bill Sharman. Had Wilt spent these 5-8 years trying to score the way Jabbar did to the end, Jabbar would never have come close to reaching his numbers. Period.

Next, I don't think even Red Auerbach would have rather had Russell than Chamberlain. Wilt would almost certainly have won as many rings as Russell had he joined the Celts.

To say Wilt cared for little but his stats is also refuted by the facts. The few times he was placed on a team with the talent needed to win rings--in LA for Sharman for two seasons, and in Philly for Hannum for one season--he won two rings out of three reasonable opportunities. He played impeccably well all three seasons, giving Sharmon and Hannum exactly what they asked of him and performing with historic efficiency in all aspects of his game, but FT shooting, which was his only weakness. Further, his Laker ring team and his Philly ring team were arguably two of the best single season teams in professional basketball history up to that time.

Oakville is right about Wilt. No doubt.

while I respect your opinion, wilt wasn't exactly playing with a bunch of scrubs throughout his career. in fact, in most of the seasons that russell and wilt overlapped, the talent on each squad was about even with wilt even having arguably the better supporting cast a couple times. as I said before, wilt no doubt was the more talented player. And you are right about him focusing more on defense and rebounding the last few years of his career. That is exactly why he got those rings. The fact still remains that Wilt never beat russell in a game 7 because of him deferring too much at the end of games. Due to his poor FT shooting, Wilt regularly gave up the ball at the end of the games. Also, if he had 4 or 5 fouls, he would barely play d at all. (He took great pride in NEVER fouling out, to the point where he would practically let his man score rather than foul out). Now, with that said, we don't know if this is due to the coaching he had or just his personality. Would wilt have focused on defense and rebounding earlier in his career had red coached him? We don't know. You very well may be right that he would have won just as much as russell with the celts but there is no way of knowing. Again, that is just my opinion and it is one of the biggest debates of all time (Wilt v Russell), but I think we can all concede that both players were among the best of all time. For a very well reasoned (although maybe a tad bit biased) argument about the two, I recommend reading the Wilt v. Russell chapter of Bill Simmon's "The Book of Basketball". I'm a KU fan and a Celtic fan so I'll argue the merits of both and I would hope both of you could at least give russell his due.

Yours is the best pro Wilt argument ever made. Period.

Agreed. But I wouldn't exactly say that rules facilitated Jordan. He got superstar calls but every superstar in the history of the NBA has gotten those calls. If you're referring to hand checks and the weaker fouls of today, those weren't instituted until about 2005. If 1988 Jordan played in today's NBA, he wouldn't average 37 ppg, he would average at least 45. In the 80's players could practically tackle Jordan to prevent him from scoring and definitely wouldn't get a flagrant or more than a personal.. We all can see how easily Lebron gets to the rim because of these rules. Jordan would have been even better.

I am more impressed with some of Wilt's other stats, which probably couldn't be memoralized on a stamp.

It will be when you lick the stamp. Or at least, you might have that thought cross your mind. I'm hoping it's one of the peel and stick variety, if there's still a choice between what type they have.

If putting Wilt's jpeg on a stamp is too tough, then maybe they should put the number of women he claimed to have slept with written in exponents on the stamp. 2x10^4

Perhaps a pop-up book the size of a very large coffee table book would suffice as the medium. :-)

I like the idea of a four pack pattern - Wilt in a Kansas jersey, a Globetrotter jersey, a Warriors jersey and Lakers jersey and make everybody happy.

Leave it to the architect to figure this one out. Will there be inverted massing? :-)

Uh, you can put your own picture on a stamp if you want. Or one of your dog, the 5# bass you caught... http://www.zazzle.com/custom/stamps