Bechard wins No. 200 in KU volleyball victory over A&M

Brianne Riley makes a dig as teammate Allison Mayfield watches during the Jayhawks match against the Texas A&M Aggies Saturday evening in the Horejsi Center. Kansas rallied from being two sets down to eventually win the match in five sets. The victory gave head coach Ray Bechard his 200th victory. 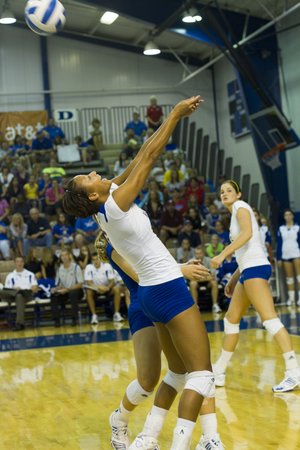 The Kansas Jayhawks won a five-set match against Texas A&M.

The Jayhawks stopped a seven-match skid against the Aggies and improved their record to 10-3 this season (1-1 Big 12).

“I’m proud that we persevered when we weren’t really clicking offensively and defensively,” Bechard said. “We played our best at the end making some great plays. We also had our best blocking effort of the year, particularly toward the end.”

Garlington, a senior, scored six of her team-high 14 kills in the final frame.

Kansas will travel to take on Nebraska at 7 p.m. Wednesday.

BFD You are no Northern Iowa.

nice bounce back win.....probably beat a better team than we lost to on Wednesday. congrats Coach Bechard on 200! Go Jayhawks!

Not sure why my question was removed. It is a legitimate question and whoever is the police around here needs to let it go.

What is Bechards win-loss record?