Southern Miss’ first attempt at beating a team from a BCS conference didn’t go so well. 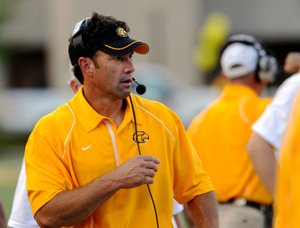 Southern Miss coach Larry Fedora looks at a play against Prairie View in Hattiesburg, Miss., in this 2010 file photo.

But two weeks after a nationally televised 41-13 loss to South Carolina, the Golden Eagles (1-1) get a second chance to make a good impression when they host Big 12 opponent Kansas (1-1) on Friday night in Hattiesburg.

“We certainly didn’t have a good outing in our last game on ESPN, so we’re definitely going out there Friday night with something to prove,” USM offensive lineman Cameron Zipp said.

It’s hard for Southern Miss to know what to make of the Jayhawks.

Kansas shockingly lost to North Dakota State 6-3 in a season opener that brought boos from the home crowd during coach Turner Gill’s first game. Then the Jayhawks turned around and shocked No. 15 Georgia Tech, 28-25.

Coach Larry Fedora says the Georgia Tech upset was much more indicative of KU’s talent level. After the Jayhawks’ awful opener, Gill made several changes to his offense, opting for youth by using redshirt freshman Jordan Webb at quarterback and true freshman James Sims at running back.

Both were good moves. Webb completed 18 of 29 passes for 179 yards and three touchdowns while Sims rushed for 101 yards and a touchdown.

“Kansas has good football players,” Fedora said. “They’ve recruited well and have done a nice job. They know how to win.”

Southern Miss recovered from its season-opening loss by beating Prairie View 34-7 on Saturday at Roberts Stadium. The Golden Eagles have a nine-game home winning streak dating back to 2008.

Now that the Golden Eagles have the homefield advantage, Gill expects a hostile environment.

“I know that they play well at home,” Gill said. “They do a fantastic job at their home stadium. I’ve coached there on one other occasion, so I have had an experience there and there will be an issue with crowd noise, particularly being a Friday night game on ESPN.”

Though South Carolina beat Southern Miss handily two weeks ago, the Golden Eagles weren’t completely outclassed. They gained 404 total yards, including 337 through the air, but lack of execution in the red zone led to several empty possessions.

Southern Miss was much opportunistic against Prairie View. Gill said his team must respect Southern Miss’ talent — led by quarterback Austin Davis and receiver DeAndre Brown — or the Jayhawks will have the same sick feeling they had after the North Dakota State loss.

Davis has thrown for 416 yards, one touchdown and two interceptions over two games, completing 68.9 percent of his passes. Brown, a big target at 6-foot-6 and 239 pounds, has caught nine passes for 165 yards and two touchdowns.

“They all can run and are dynamic players, so we are going to have our hands full there,” Gill said. “The key to the game — we have to play with tenacity. Our guys have to play with the same type of execution, passion, and confidence that we played with last week.”

Austin is a great town and KU friendly:

Third Base on west 6th street has been the alumni spot, not sure about this year though.

Sorry for the same message, didn't click on "ProudKansan's" link. Third Base is a good spot for watching games, not sure how many alumni will be there though. I'm from Austin but will be up in KC this weekend.

Ok, now that we have heard from Southern Mississippi, let's put the ball on the tee and play some football! Good luck, Jayhawks!

"Southern Miss was much opportunistic against Prairie View."

ERROR DOES NOT COMPUTE