Lawrence-Douglas County Fire Medical workers stop to admire a wall of photographs from the Kansas University men’s hoops 2008 national championship in the northwest corner of Allen Fieldhouse. The KU athletic department put on a tour of the renovations at the fieldhouse. 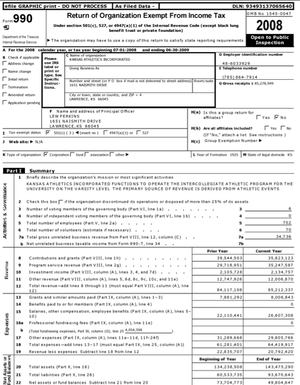 Kansas Athletics revealed to have millions in debt

Recent tax documents showed the department had about $30 million in debt, money that was used for improvements on Allen Fieldhouse.

Kansas Athletics Inc. has reported financial liabilities of $93.67 million for the 2008-09 fiscal year, up nearly 57 percent from a year earlier.

The total is included in documents the department filed with the Internal Revenue Service, to maintain the athletics operation’s tax-exempt status. The report is the most recent available.

The jump in liabilities came largely because of major construction projects: more than $32 million for construction, expansion and renovation at Allen Fieldhouse, the Horejsi Family Athletic Center, the Wagnon Student Athlete Center/Parrott Athletic Center and vicinity.

The filing also noted how the department had borrowed $6.5 million from the KU Endowment Association. The transaction served as a bridge loan, allowing the department to start construction of the Anderson Family Football Complex.

The loan was repaid during the fiscal year.

The report includes information about the department’s long-term debt, including liabilities of $46.565 million from tax-exempt bonds. That was up from $15.065 million a year earlier.

Kansas Athletics is repaying such bonds using private donations, and donors are maintaining their commitment to athletics through the economic downturn, said Jim Marchiony, an associate athletics director.

“They’re going great,” Marchiony said Tuesday, of donation levels. “Kansas Athletics has very loyal and generous donors. … The indication is that it is at least as strong as last year.”

The documents filed with the IRS also indicated that the department paid nearly $2.2 million to the Orange Bowl in 2008-09, ranking the bowl No. 4 on the department’s list of highest-paid independent contractors. The expense reflected the amount of money the department spent on bowl tickets, which in turn were sold by Kansas Athletics.

Another reason why the new AD needs to spend more time working in the office instead of sitting on press row, and flying all over watching the sports teams play.

Yeah, and he can save a bundle by using an abacus rather than an electronic calculator.

Or better yet, he can do math with his fingers and toes, and save even MORE money.

Sorry, I try to abstain from criticizing shoddy journalism here, but this article, as presented, is, I'm certain, a waste of opportunity, resources and reputation. Three "themes" to consider when filing a story like this: context, depth, balance.

you can stop pretending to be a KU fan. we're all well aware of your schtick and it's tired. find something else to occupy your time.

Mr. Fagan - Isn't this half the story? If your going to write about an increase in liabilities relative to a year ago period, it would be interesting to include revenues decrease or increase along with that. Come on. If you're going to write a financial article, put some meat on the bones.

Seems like you've plucked a few tidbits out of the attached tax return in an attempt to prop up the dramatic headline. I'm no journalism professor, but probably a D-.

Obviously a slanted article trying to paint the athletic dept in a negative shadow. Why? So the bills are up with the massive improvements in facilities... duh.

Imagine that! This is almost like reading the Onion...

"Cup of coffee at McDonalds raises $1 million debt that McDonalds must pay off due to new coffee machines nationwide."

Oh and did we forget to report that this company makes millions every year on their product?

Of course costs are up!

McDonalds doesn't have to fly a bunch of revenue losing sports around like Taco Bell & Bucky's (bless your soul Bucky), or Joe (best donuts hand down ever).

No way. But KU, like all colleges, has to fly a bunch of kids who play various sports around the country in this amazing thing called an airplane & occassionally feed them & give them a hotel room, which, guess what???

What is this story trying to say?

Of course those renovations cost money!

I want no one else besides Coach Self & Turner Gill running our big programs. That's our wishlist & we already have them. Character & awesomeness wrapped into two fantastic young, charismatic coaches with principles, coaching in the finest facilities in the world.

We are proud of that money spent!

And we have to fly teams everywhere....

And guess what, inflation occurs...

So what is the point of that headline?

All the hate shows me something -- someone fears us.

If I was a graduate of someplace other thsn KU, I'd fear Turner Gill's next twenty years & Bill Self's next fifteen years at KU too.

But how pathetic to write & title a story like this, presuming your readers don't understand college athletics or issues of cost/benefit.

Where did this writer graduate from?

And why didn't the editor double check his half story?

im sorry. HOW does this story have a liberal slant? its like a paragraph of math and a single quote. and for the record, all newspaper sales are abysmal because anyone can find the news on the internet.

The liberal news bias is such a joke. Considering that News Corp owns half of the major newspapers in the country and FOX News is the largest cable news outlet I'd say if anything there's a pretty sharp conservative twist to todays news.

News Corps and its clones are foreign owned fascist entities. And probably control 80-percent of the media. Sadly.

So they have gone into debt to build facilities, and are paying down on this debt,even during a recession? Where is the bad news? Only a tool that thinks all debt is bad or loathes KU would find the negative here. Cue Kevin Keitzman ......

Using debt to pay for daily expenses would be bad; no so for capital improvements.

Why doesn't the article note that even though liabilities are $93M, revenues were $143M for net assets of $50M? Wouldn't that seem to be an important thing to note?

Your article heading seemed intended to imply that KU may be heading towards financial trouble ... i.e. it looks like you're trying to start a rumor. You publish a bunch of numbers that seem slanted towards the negative and that don't mean alot without some context. The article ends without any conclusion really. Is it LJW's role to start rumors? Many readers are interested in KU's financial dealings. If you're going to write about them, get some help from a financial person who can help you organize this information so that it's fair, balanced and so it makes some sense. Otherwise, leave the subject alone.

Come on World Company. Either take this down or re-publish it with a full accounting of the facts.

Maybe your writers just aren't smart enough to realize that debt in and of itself is not necessarily bad. For example, when a private corporation has revenue and assets that exceed said debt or when the debt has been taken on to make capital improvements.

Or maybe your writers are smart enough, but they know that your average reader isn't, and so they realize this headline will generate negative attention.

Ah, who cares why...it's a trash article. You should be proud.

Weak article. Very disappointing given the 18 years the author has had on staff to sharpen his craft. Attaching a .pdf of the tax form does not constitue reporting the whole story.

This article is about posting information. Why does it have to have a slant and why are posters so defensive? At the end of the day we know that the KUAC's debt is on the rise...along with thousands of other corporations across the country. When the economy does turn around KU will be well positioned to make some hay because of the efforts being done in the last 2 years.

That's kind of the point--it does have a slant as currently written, and shouldn't if it's going to be considered a "news" story.

so, the $6.5 million "bridge money"... is that the money they didn't get from that thief Kivisto?

So where does that balance sheet rank in the B12?

Hey LJW... you gotta answer for all of us? Do you read this? What a horrible article.

Some costs are rather inexcusable, such as the $2M scoreboard in the stadium. One thing is clear, the debt growth was rapid--and comes at a severe economic downturn. The positives are that loans are less expensive now; the downside is that donations are also down in such an environment.

I am stunned by how terrible this article is. All corporations have liabilities, but they also have revenue. The article fails to mention that the revenue is far higher than the liabilities, making Kansas Athletics very profitable. This is a smear article and the Lawrence Journal World seems to only write those types of articles. Enough is enough. Either report the whole story or do not write it. I wish there was some way they could be held accountable for their unprofessional and shotty work!