Melissa Manda, front, gets in position for a dig while teammate Brianne Riley looks on against Arkansas-Little Rock on Saturday at Horejsi Center. 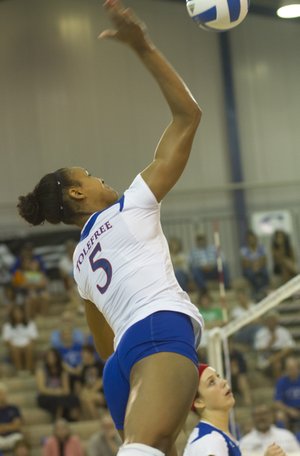 No. 18 Northern Iowa took the title, while Winthrop finished fourth.

“We played everybody on the roster today,” said KU coach Ray Bechard, who is one victory shy of his 200th at Kansas. “Sometimes when you do that, things get a little uneven and momentum changes. But we did block extremely well, and we gave everybody an opportunity, which we wanted to see some people in different situations heading into Big 12 play on Wednesday.”

Kansas will open its Big 12 season Wednesday at Kansas State.