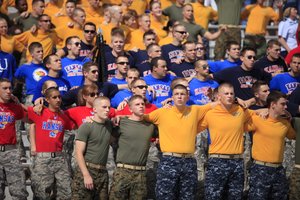 Kansas' defense came up with a fourth-down stand in the final minute, helping the Jayhawks to a 28-25 victory over No. 15 Georgia Tech on Saturday at Memorial Stadium.

Justin Springer said it all hit him once he sat down at his locker following Kansas University’s 28-25 upset over No. 15 Georgia Tech on Saturday.

So much was rushing through his head: the end of the eight-game losing streak, the hard work he’d put in during the offseason, the KU students congratulating him on the field after the game.

The senior linebacker started to tear up.

“It’s a big win,” Springer said. “The biggest win of my life, to tell you the truth.”

KU might not have been able to pull it off without him.

The 6-foot-3, 237-pound Springer had 15 tackles, including three tackles for loss and a sack.

His previous career high in tackles was nine.

As Springer’s four-year roommate, Dudley knows just how hard Springer has worked to be ready for this season.

He’s been there when, after two-a-days, he’s returned to the dorms ready to go to bed at 9:30 p.m., only to see Springer with a lamp turned on, still looking over the team’s formations.

“I guarantee,” Dudley said, “no one studies their playbook more than him.”

Springer said his preparation — and extra film time this week — helped him get ready for Georgia Tech’s difficult offense.

His responsibility wasn’t easy. Depending on how the play went, his obligation could be either the running back on the dive play or the quarterback on the option.

“I’m not going to lie, before the game I was still nervous. I haven’t been that nervous in a long time,” Springer said. “But I was so relaxed playing.”

The last time Springer had 15 tackles in a game was high school, when he recorded 18 tackles in a playoff game his senior year against Austin (Texas) Westlake. That game led to him getting recruited by Div. I schools.

On Saturday, Springer was most dominant in the second quarter, when he made or assisted eight of KU’s first 14 tackles.

“I know one play, I saw him fly over the offensive line and hit (Georgia Tech quarterback) Josh Nesbitt. I was like, ‘Whoa, where did he come from?’” KU linebacker Steven Johnson said. “Justin played well.”

Springer said it was the first time he’d experienced fans rushing the field afterwards to celebrate with his team.

“It’s just a great feeling,” Springer said, “winning like that.”