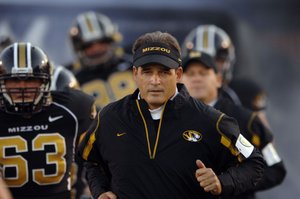 In this Oct. 25, 2008, file photo, Missouri football coach Gary Pinkel leads his team out on the field in Columbia, Mo. A tumultuous preseason has MU under fire, though Pinkel says QB Blaine Gabbert has responded to the challenges from a leadership standpoint.

Columbia, Mo. — Missouri quarterback Blaine Gabbert made a grand debut in last year’s 37-9 victory over Illinois. It’s a stronger, more experienced Gabbert that has teammates heavily anticipating an encore in today’s season opener against the Illini in St. Louis.

A year ago, Gabbert made his first start since taking over from the departed Chase Daniel and went 25 for 33 for 319 yards and three touchdowns. He also carried the ball 10 times for 39 yards and a score.

That performance paved the way for a solid sophomore campaign in which Gabbert finished second in the Big 12 in passing yards (3,593) and passer rating (140.5). He put up those numbers despite a high ankle sprain suffered on Oct. 8 against Nebraska that limited his mobility for the remainder of the season.

“Blaine has progressed to be one of the best quarterbacks in the country,” receiver T.J. Moe said. “You aren’t going to find a guy who can make the types of throws that he can.”

Missouri needs more from Gabbert these days than his skill on the field. The program has been hit by three arrests related to driving while intoxicated charges and suspended tailback Derrick Washington was charged Monday with sexually assaulting a woman over the summer.

“From a leadership standpoint, he is doing an awful lot right now, and that’s good,” head coach Gary Pinkel said of his junior quarterback. “We need that from him.”

Gabbert’s biggest challenge may be finding someone to throw to. Missouri lost standout receiver Danario Alexander, who set school records in receptions (113), yards (1,781) and touchdowns (14) a year ago.

“Every one of our receivers are pumped up,” top returning pass catcher Jerrell Jackson said. “We know it’s our year to step up, everyone is excited to get out there and play.”

The 6-foot-5 Gabbert has been putting in extra work this summer in preparation for his second collegiate start at the Edward Jones Dome. He hit the practice field all summer, building chemistry with his young receivers, and spent hours in the film room learning from mistakes he made last season.

“The game has really slowed down for him,” Pinkel said. “His knowledge base is so much larger. He’s worked tremendously hard to up his game to the next level.”

Gabbert attributes his extensive knowledge of the spread offense to those film sessions. His hard work hasn’t gone unnoticed by his teammates.

“He is like a 10-year veteran out there,” backup quarterback James Franklin said. “He knows exactly what he’s doing.”