Not many people showed up downtown for the KU football pep rally thanks in large part to poor weather. The Jayhawks open their season at home on Saturday. 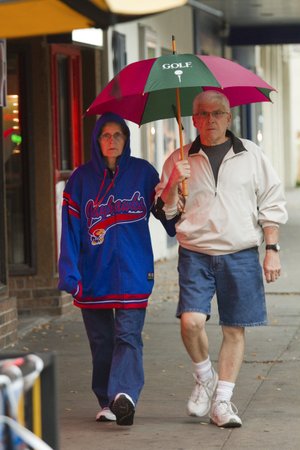 A pep rally planned for the KU football team was met with rainy weather in downtown Lawrence September 2, 2010.

The 1000 block of Massachusetts Street closed to traffic Thursday afternoon for what was supposed to be a large pep rally to celebrate the start of Kansas University’s football season.

Mother Nature had other plans.

“Unfortunately, the weather didn’t cooperate, but it was a fun event while the people were here,” said Jim Marchiony, associate athletics director.

Events were scheduled from 5 p.m. to 7 p.m., with inflatables, the KU marching band and cheerleaders all expected to pump up fans before the football home opener Saturday.

Shortly after 5 p.m., rain started pouring downtown. Those who filled the street ran to take cover under nearby awnings. The storm lasted less than an hour, but Marchiony announced to the dwindling crowd the pep rally would be significantly scaled back because of inclement weather.

John and Bette Sue Wachholz braved the elements to check out the pep rally.

“I just told him (her husband, John), I hope the game’s more exciting than the pep rally,” Bette Sue Wachholz said.

“I guess we have to let the weather run some things,” John Wachholz said.

Despite the rain, some fans stuck around. Many of them sat inside Buffalo Wild Wings Grill and Bar on Mass. Street to listen to football coach Turner Gill on his first Hawk Talk radio show, which was broadcast live from inside the restaurant.

“It went good, had a great crowd,” Gill said as he stepped out after the show. “I can see the excitement, feel the excitement. Everybody’s ready for football to start.”

He and four KU football players held a small pep rally for the crowd of fewer than 100 people.

“We don’t expect fans to come out and bear the weather. There are some people sticking around, and we appreciate that,” KU running back Angus Quigley said.

Quigley said fans can expect a great game on Saturday.

“It’s time to put on the pads against somebody else. We’ve been working hard, and it’s going to be fun,” he said. “We’re ready to rock and roll.”

The next pep rally in downtown Lawrence is set for Oct. 21, which is two days before KU’s homecoming game against Texas A&M.

“We’re considering this a good dress rehearsal for the event we hope to have in October,” Marchiony said.

Damn.....I thought maybe you posted a video of ur funeral or un-timely death mulaza....o well, hopefully next time

As you can plainly see from the photo above, mulaza is still kicking. And he's rocking the jean shorts.

Weather wasn't a big issue for me yesterday. It was the fact that I worked until 6 then had the first compelling match ups of the year to watch. I've been chopping at the bit so bad to watch a real football game that given the choice between hearing another hour or two of coach-speak vs. seeing a couple of future opponents take the field I'm going to take the game every time.

Neither Iowa State nor Southern Miss looked all that spectacular BTW. Who knows what we'll look like, but both of those teams at least look beatable.

We'll just have to see how this young team responds.

mulaza, Do you have one positive bone in your body? Obviously not!

He's just your average troll with nothing better to do than try to rile people up for the attention.

Ignore him and he'll eventually find somebody else to annoy.

Read that this morning.

Sons, that is soooooo cool.

If it rains on game day are there only going to be 100 people there? If the fans want to build the program, RAIN OR SHINE!

Yeah, Jay, I am with you. If I lived within 30 miles of campus I'd be there. But, alas, I live 1500 miles away. Although, I have wondered if "pep" rallies are really necessary, if they are not in fact an obsolete thing this day and age. Believe me, if I was responsible it would not be a typical rally.

Maybe it has nothing to do with the weather, but rather is related to the new coach.

I heard on the radio that there are still family packs available ... didn't they sell out last year AND they year before?

Thanks for nothing, Lew Perkins!!!!

Like I said before, Mangino used to deflect all the fat jokes away from him. Just kiddin' seven. I'm a rather large mammal myself these days. Office work will do that to you.

Either Gill works out, or he's gone in 3 years. Either way, it's not the end of the world.

You may end up being completely right about Gill, but I for one am willing to give him a shot. No point in being all down in the dumps about something that may very well end up being a great move.

I still fully believe that if Tuberville had come in and shown any kind of success he would have been on his way back to the SEC ASAP. At least Gill is a Big 12 guy that might actually stick around and shows some great potential. I'd rather have a coach that wants to live here than a coach that will almost certainly use us as a stepping stone. We've been down that road before and it doesn't end well.

Anyone know if the game will be televised on DISH network? Is there a site that replays these games?