Fit Cyclones’ mantra: ‘Let them be the weak team’

Mecham should start at quarterback again 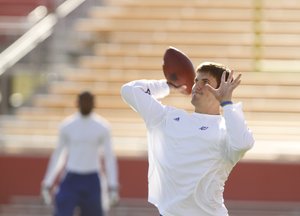 “You can tell that their heads are starting to come down, and you’ve just got to keep working,” Alvarez said. “That’s when you’ve got to put your foot on the gas and choke them out.”

Though ISU managed just 8 minutes, 43 seconds of possession time in the first half, the Cyclones found immediate success in the second half with their “jet” — or hurry-up — set.

ISU posted 218 yards of offense during three touchdown drives in the third quarter.

“That’s why, just like coach (Paul Rhoads) emphasizes and talks about, we’ve got to be the best-conditioned team in the nation,” Alvarez said. “We pride ourselves on working hard and knowing that we’ve got to take control and don’t let them see our weaknesses. Let them be the weak team.”

Alvarez noticed that some of KU’s defenders were slow to get up after plays in the third quarter.

The switch to the jet offense wasn’t the only change the Cyclones made in the second half.

Iowa State also made changes on the defensive side, realigning their formation at halftime to stop one particular running play that KU had success with in the first half.

ISU linebacker Jake Knott said that defensive coordinator Wally Burnham drew up the running play in the locker room, then gave his defenders a scheme to stop it.

“That’s what ended up happening in the second half,” Knott said. “That was probably the biggest thing that happened.”

After rushing for 92 yards in the first half, KU had just 27 rushing yards on 12 carries in the second half (2.3 yards per carry).

“We didn’t have enough people over there to fill all the gaps, and so that’s what they got all the big runs on,” Knott said. “(The coaches) figured it out really fast and got us back on our feet and ready to go.”

Rhoads said he wasn’t surprised KU played so well in the first half with its third-string quarterback (Quinn Mecham) playing and two players suspended.

“I’ll guarantee you, our football team was ready to play today,” Rhoads said. “Our football team had plenty of legs and juice to them. Kansas came out and played a dang good first half.”

Conditioning was a strength of Coach Dawson, tho apparently not as much for Big John, tho the lack of depth is also very apparent.

Lack of conditioning is inexcusable... At this level of competition, you have to be able to play 1.5 games without getting gassed out. That is something you can fix quite easily next year (though you have to get a little mean with the kids for this!).

Is it running out of gas? Or is it just the quit coming out in some of these guys? But Big John and the team need to do some more running in the off-season it seems like.

Sorry, Jesse, but your article not only missed the bulls-eye but it may have missed the target altogether. Even sportswriters have bad days...it's OK!! You are still outstanding.

Keep fighting Jayhawks; fans from all over the world are rooting for you!

Yesterday you guys showed a lot of guts & we're proud of you.

It has been brought to my attention by former players that the new S&C coach does not believe in running and conditioning. That is possibly on the of the dumbest, absurd things I have heard in all my years. It is obvious that the players are gassed by the 3rd quarter. How in the hell did this guy get a job, and how the hell do we get rid of him. This is an embarrassment to coaching, and especially to KU. You sir are a joke, and don't deserve the free meal you get before a game.

Give them some time to get their athletes in shape the way he envisions them being in shape. Certainly his plan is to have athletes that can run fast & run all game.

ISU & other teams have noticed the conditioning weakness on our squad during a rebuilding year.

This is nothing to be ashamed of, just something to work on for the next year with training & recruiting.

It's like playing against UNI in basketball. You can either play fast & smoke them due to having a deeper, more athletic team.

Or you can not run the Jet offense in the 2nd half as ISU did yesterday. They decided to run the Jet in the second half.

If they don't do that, there's a good chance that KU wins the game yesterday.

Give ISU credit; a great 2nd half gameplan.

We will only get better at gameplanning as the years go by; Rome wasn't built in 6 months.

what in gods name are you talking about? Conditioning the way they like? what does that even mean? I am so lost in the ridiculousness of your comment i'm not sure where to start. Conditioning is not something that takes time, or that requires the coaches "players." You make them run, do plyo's, position specific drills, and in the end, they are in good shape. You should never have to worry about not being in shape, that should never be a factor, but with this group it is. It doesn't take talent to be in shape. I'm still not sure what you were trying to get at...

What I'm getting at is ISU saw in the first half our guys could stop their slow offensive approach.

So they changed the rhythm. Moved the tempo up, checked to see if our conditioning could match their's. ... Tired starters now must stay in the game.

It's now suddenly like a track meet (do we have depth?)

It's the fast paced offense that they can afford to run with their Jr's & Sr's & their ability to sub.

That is what beat us. And ISU gave a good taste of the hurry-up to the Longhorns too. If you don't understand what I'm saying, reread the article, I'm simply seconding what the writer of this article said.

We will be conditioned as the years go by. Essentially, however last night, we were UNI & ISU was KU's 2010 team.

The smart thing ISU did in the second half was they turned it up, forced our defense to get up to the line quickly.

In hoops, against UNI, KU in the second half chose to keep the same players in the game & not turn up the tempo, even though UNI had a total of 5 guys that could keep up with us, and KU had 10.

ISU saw a number's game existed in the second half & took full advantage of it.

Lastly there's a lot more to conditioning than what you say. Give Gill & his staff a year to see what needs to be done. Yes they got beat in the 2nd half yesterday, partially due to conditioning.

We're not talking pro athletes here... We're talking about conditioning of a bunch of 18 & 19 year olds, my friend, where ISU had a bunch of juniors & seniors who had been in the system for five years.

It takes time. Yesterday was a good step for us.

Not one player quit out there.

You're in denial bro.

Your comments are starting to make less sense with every post.

You need to take a HUGE step back and reevaluate this team. I can understand you wanting to give support to your team, but you really gotta see the facts man. If you wanna be faithful, you gotta be able to accept the truth.

Like acs said, conditioning is not something that only comes with talent. You GAIN conditioning by working your arse off and practicing, and that lies directly on the shoulders of coachs. It is apparent the coaching staff is not bustin enough a$$ during practice, and it shows on the field. Even a 1 recruit should be able to play an entire football game and not be completely gassed at the end of a game unless it was just an absolute brawl. Now the 1 recruit may not have the speed, quickness, muscle, moves etc (talent) to match up against a more elite opponent, but if the coaching staff is conditioning properly, then that 1* recruit should be able to last much of the game without being gassed. Even though hes going to be getting his a$$ kicked in the trenchs, he should still be able to hustle on the ball for 60 minutes.

But, go ahead and keep believing, because god knows that this teams needs it. I'm just not ready to give up my opinion yet and jump on board the believers wagon. I for one did not see anything that impressed me when Gill was hired and I have yet to see anything to make me change that opinion.

Let this be food for thought. Maybe put it into some sort of perspective. If the USA were to fall back into a third world country, who would you blame it on? Thats right. The Government. You wouldn't blame it on the citizens. KU is in the same type of scenario. Its time for Gill to stand up and start taking the blame. If he is truely as honest as everyone says he is, then he needs to shoulder these losses. Quit making excuses. You're a 2 Million dollar coach in what has been a powerhouse conference. Its time to put up or shut up.

I correct my statement.

Therefore, you're a 10 MILLION dollar coach in what has been a powerhouse conference. Its time to put up or shut up.