KU running back Deshaun Sands arrested, then released for not appearing in traffic court 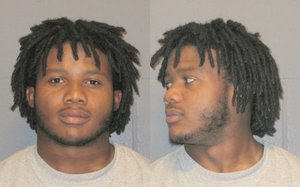 Kansas University running back Deshaun Sands was arrested Thursday morning on an outstanding warrant for failing to appear in municipal traffic court.

Kansas University running back Deshaun Sands was arrested Thursday morning on an outstanding warrant for failing to appear in municipal traffic court.

According to Douglas County Jail records, Sands was booked on two municipal traffic warrants just before 9 a.m. Thursday. He was arrested at the Lawrence Municipal Court building, 1006 N.H., for failing to appear at earlier court dates.

“Deshaun is a good kid, and we support him 100 percent,” said Jim Marchiony, a KU associate athletics director. “But we tell all of our student-athletes that if you don’t take care of your personal responsibilities, minor things can turn into something that looks much more serious.”

According to the municipal court clerk’s office, Sands had one outstanding warrant for an allegation he was speeding on Aug. 6. The other case related to an allegation he did not have a valid driver’s license or insurance and was driving with expired vehicle tags on June 29.

Staffers in the clerk’s office said they could not provide information about past or future court dates. It is customary for the municipal court judge to require defendants to be booked into jail on outstanding warrants after missing past court dates.

According to jail records, Sands, a red-shirt freshman from Sunrise, Fla., posted $441 bond and was released Thursday morning.

Marchiony said KU coach Turner Gill would handle any discipline internally and that Sands was still a member of the team.

Where ya at Coach?

Good to know you value wins and losses over the unfortunate predicament of a young man. You're a real class act.

It's a freakin' traffic violation. Get over it. I'll take the 8-4, thank you.

CRAP. The offense may only average 6.5 points a game rather than 7 now!!

I want to know what the punishment will be for Sands. Players have been kicked off the team for a variety of things. Since Sands hasn't done much anyway will he be missed? I know he is Tuxedo Tony's son who I admire a lot, but the team stinks and kids are getting in trouble.

Gill needs to make a statement here to hold true to his words. I know there haven't been many statements on the field, but we need to start somewhere.

I don't think the punishment is anyone's business by his own. And I do assume Gill will punish him in some way.

Yeah lets kick a player off the team for a traffic ticket!

It's not like Sands has made a difference anyway. 1 carry, 1 fumble last week?

He can't even outrun defenses, how did he think he could outrun the law?

Easy now guys. We all know that Coach Gill will punish him for his actions.

"Sorry Deshaun. Your not getting any milk and cookies today so go sit in the corner and think about what you have done, OK'."

"Ok kids, where were we? Oh yes, I was just about to tell you the part about how you all become idol citizens........"

Funny, nobody wanted Brandon Rush to be kicked off the basketball team for essentially the same incident a couple years ago. Nor were there mentions of a lack of discipline by Bill Self...

Well said. For a second there it seemed like the KCStar had somehow switched comment sections with LJW.

Way to pile-on, everybody. We're talking about traffic violations here. I seem to recall the outrage on this board when Brandon Rush was in a similiar situation. At that time, everyone was quick to defend B Rush from being branded a criminal for what was a petty offense. But because Sands has not been very productive, it's ok to throw him under the bus? And to suggest that this is symptomatic of Gill's leadership abilities is, quite frankly, ludicrous. These must be desparate times indeed.

Where are you getting the word "everybody" from? What I read prior to your comment was maybe 1 or 2 side remarks and a few cracks in jest about the situation. According to your post, the entire KU fanbase is gunning to boot the kid off of the team.

Get off of your soapbox and get a life.

sigh All of the above posts, except for the one directly before mine (which was being written as I wrote mine, note the time similiarity), were either derogatory towards Sands or Gill. "Everybody" refers to those who had posted before me. I see now that other rational fans have, fortunately, weighed in. I was merely pointing out that these negative reactions were surely a result of the unfortunate state of our team at the moment. There's no need for Ad Hominem rebuttals here, particularly when I have neither a platform to promote nor a perceivable "life" for you to judge. Beat the Aggies.

If anyone jumped to conclusions it you, hawksquawk/tdub/whateverotheraliasyougoby. This is a non-issue.

yea, totally 'burg. I just wanted to post a comment with my alter ego "tdub", then turn around and post a longer version of it exactly 1 minute later with my other alter ego. gasp You must be ZDKC in disguise!

I don't want him to be kicked off. I feel like he should be punished, because after all he did get arrested. I just wish we didn't have athletes that were stupid. He didn't get arrested because he is a criminal, he got arrested for being stupid. Same with B-Rush. Same with 90% of college athletes. I fully expect Gill to make an example of him though. He may put up with a crappy football team, but I don't expect him to put up with this.

Let those who have never had a traffic violation cast the first stone. Anybody?

These are offenses any of us are capable of. He does it and people say the team is out of control, and full of thugs. Kick him off the team! "What's wrong with Gill?" "Why can't he control his team?" C'mon, guys. If you failed to pay a parking ticket do you think you should be kicked out of the fantasy football league, or rec basketball team? If you expect college kids to be perfect, perfect citizens, then your judgment needs a realignment.

Nobody's perfect, especially when they live under a microscope. When you got a ticket for speeding, was your picture in the paper the next day? These guys have to deal with stuff like that.

They need to try harder. How difficult is it to show up for court? I'm sick of all this negative attention drawn to KU Athletics. TRY HARDER!!!!!!!!!!!!!! That's all I'm asking. I'm sick of being embarrassed by my alma matter. It's one thing after another....

This will be a learning opportunity for Sands and an example to rest of the KU student community. Take care of business, because ignoring problems won't make them go away. Many of you may not like Coach's methods, but Gill (and his staff) have more knowledge and experience in one fingernail, than all the rest of us combined. Wins will ultimately decide his fate at KU, but in the meantime, I look forward to the opportunity to watch him mold these young raw talents. I have full faith that he will.

No cell phone for a month young man!

speeding, no valid drivers liscense, no insurance. where is this kids parents? a little molding at home seems in order. HCTG can only do so much and i'm thinking he is doing just fine. and whats up with this comparison between sands and rush? rush is already well on his way to being a doper has-been. i predict sands will straighten up and be okay from here on out.

Calling for heads because a teenage kid got a speeding ticket and didn't pay up before the due date? I guarantee there are good, upstanding alumni reading these boards who have done considerably worse when they were young and dumb. Drugs? No. Stabbings and shootings? No. DUI? No. Just a speeding ticket, probably with an "I forgot my license at home" thrown in. I agree totally that he needed to be responsible and take care of this on time. I agree that we don't need some bad legal press on top of lousy performances, but as problems go, this one's pretty minor.

it's a damn failure to pay a traffic ticket. get over it. not that big an issue.

Are some of you really suggesting that this MINOR violations shows lack of team discipline and control by Gill? Wow. There are some drama queens here.

WOW!!! Traffic violations. BIG DEAL!!! Thus was NOT a drug charge, or beating up a girl friend or even shooting someone with a BB gun. He us a out of state kid who didn't update his tags and forgot to pay a ticket. Not a big deal.