Kansas players Tayler Tolefree, left, and Karina Garlington rise up to get a block on Texas player Rachael Adams. The Jayhawks lost to the Longhorns, 3-0, on Wednesday at Horejsi Center. 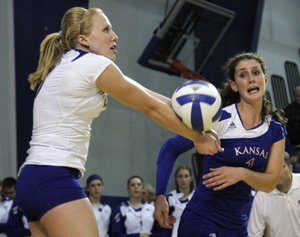 Kansas' Morgan Boub, left, gets an arm on the ball against Texas. 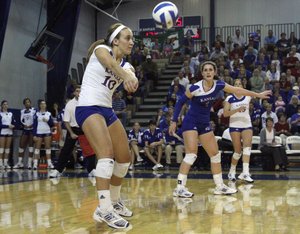 Brianne Riley (10) gets the bump on the serve as Kansas went against Texas Wednesday, Oct. 20, 2010, at Horejsi Center. 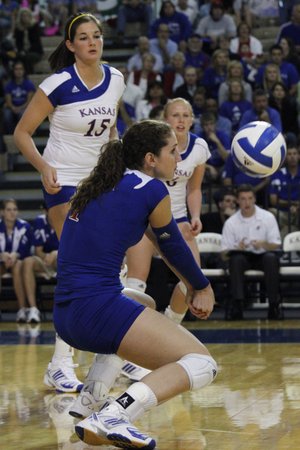 Melissa Manda digs for the bump as Kansas went against Texas.

“We can not allow someone to hit over .400 and expect to be successful,” Kansas coach Ray Bechard said. “You hit .236 in a game like we did and you should win, but not when your opponent is at that clip.”

Upside for this team is still good, but ladies have to start buying into defense, and consistently doing the right things This may as a squad be the most talented Bechard has had.

I was there at the game Wednesday night and I was shocked to see a STANDING student section. The band was overflowing their usual spot (as they seemed to of picked up 30+ more band members for the game).

However, the girls fought hard. Sadly they could not take a set from the Longhorns, but they showed courage and never gave up. Maybe the football team should take a lesson or two from them.