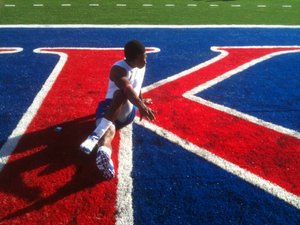 Videos from the Jayhawks' game against Kansas State on Thursday, October 14, 2010.

Sometimes, Fred McGriff brought up the subject when eating with his son at Bigg’s Barbecue or Applebee’s in Lawrence.

Other times, the topic would come up when the father and son were playing Madden or MLB 2K10.

The former major-league baseball player would tell his son, Erick, always to be ready for his chance.

“He would always tell me, ‘You never know when it’s going to happen,’” Erick said, “and to make the best of the moment when it comes up.”

The red-shirt freshman impressed during his playing time in Kansas University’s 59-7 loss to Kansas State on Thursday night, catching three passes for 37 yards, including his first reception as a Jayhawk.

“It was exciting,” Erick said. “I was just ready to go in and do my thing and help out any way I could.”

McGriff was called into the game late in the second quarter after KU receiver Christian Matthews left because of an injury.

McGriff, a 6-foot-3, 209-pound native of Tampa, Fla., picked up his first collegiate catch in the third quarter, taking in a two-handed chest pass from Jordan Webb after the QB scrambled out of the pocket.

“That’s not how I envisioned (my first catch), but there’s no better way to go get it,” McGriff said. “It was fun.”

Later in the third quarter, McGriff went high to bring down an 18-yard reception between a Kansas State cornerback and safety.

McGriff said he’s learned the most from watching teammate Daymond Patterson, who has helped him improve his hands and feet and also helped teach him how to read coverages.

“I always watch him and see what he can do, because I know he’s a great receiver,” McGriff said. “He gets open a lot, and he makes it happen. That advice from him is good.”

Erick said his dad helped him last year when he decided to sit out the season with a red shirt.

“I couldn’t ask for any better (from him),” Erick said. “He knows what I’ve gone through. He’s been through similar situations and similar stuff. He’s just a great role model.”

Fred flew to Lawrence to watch the game Thursday, though he and Erick weren’t able to see each other before kickoff.

Though Fred makes most of KU’s games, Erick figured this would be his favorite.

“I know he’ll definitely share this moment with me,” Erick said, “and we’ll have fun to talk about it afterwards.”

a much needed bright spot in a down year. Rock Chalk Jayhawk!

But this article shines the light of truth on this current edition of Kansas football. After being slaughtered by our in-state rival we fill the space with a feel good story about 3 catches and 37 yards.

Count me in the group that believes Gill is in way over his head and the blame falls squarely on Perkins.

The huge woodrow that Perkins had for hiring Gill should have had his skin stretched tight enough to keep his eyes wide open to Gill's 13-13 record after being named MAC coach of the year...apparently my parents were right...that stuff can make you go blind.

Lets use some height and get some mismatches down field.

I think we have some bright spots in the future, and I'm still behind Gill. I'm not sure Webb is the QB for KU though. Also, Mecham threw for over 3,000 or 4,000 yards at JC last year. He has to be more accurate than Webb is.

It has a lot to do with competition. Webb through for 4,000 yards in one year in High School. And every KU fan should remember the RB Crawford who had almost 2,000 rushing and could barely total 200 at KU. The game is faster and the defensive schemes better. JC stats do not always translate.

Wow. You actually predicted a KSU blowout! Jeez, you are amazing! You go, Nostradamus, and I expect you will ride this hot streak to a big-money weekend.

I agree that we should be going to the taller receivers more and trying to create some mismatches with defense backs. I really have my doubts aout our present quarterback. After the GT game I had a better feel for him but the last twoa games have been bad. He coukld do nothing in the Baylor game as far as passing or running and in the Kansas State game he could not run the ball at all. Our offense line did fall back with their blocks and gave him a lot more time to pass but his passes were mostly poor and off target.

Disagree, Webb will be an excellent QB. Give him a chance. No he is not TR but who is?

Whether you think Webb is good OR bad, I know one thing for sure. He IS a freshman! Not too many freshman look good at any school, and certainly won't look to hot with an O-line that started thin and lost half it's snaps to injury. Either way, something certainly is not working. I'm a Gill fan, but lately things seem to be getting worse. In 1987, we were 1-9-1, and in 1988 we were 1-10. Sounds about the same or maybe worse, but we were so much more competitive under Glen Mason. I'm really hoping we can at least look like a team that cares going forward.