Weeden, Martinez radically different, but both are undefeated as starters

By By Jimmy Burch - McClatchy Newspapers

Among first-year starting quarterbacks in the Big 12, they represent opposite ends of the age spectrum. 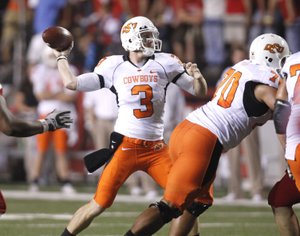 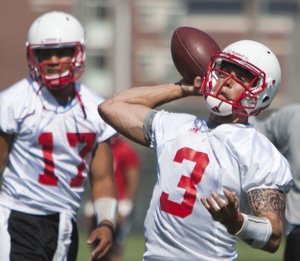 Nebraska quarterback Taylor Martinez (3) gets past Kansas State defensive tackle Ray Kibble to score a touchdown during the first quarter of their game Thursday in Manhattan.

Oklahoma State’s Brandon Weeden, who shares the NCAA lead in touchdown passes (18), will celebrate his 27th birthday Thursday. Nebraska’s Taylor Martinez, a red-shirt freshman who leads the nation in rushing touchdowns (12), made his first college start as a teenager before turning 20 on Sept. 15.

They do their jobs in radically different ways, but share a unique bottom line: Neither has been defeated as a starting quarterback in college — the only current starters in the Big 12 who can make that claim.

Both will receive season-defining tests Saturday to see if they can extend their 5-0 career records as starters.

Martinez will be matched up Saturday against the league’s only starting quarterback younger than himself: Texas’ Garrett Gilbert, 19. Martinez will be asked to do something no Nebraska quarterback has done in the Big 12 era: lead the fifth-ranked Cornhuskers (5-0, 1-0) to a regular-season victory over the Longhorns (3-2, 1-1).

Nebraska is 0-6 in regular-season meetings with the Longhorns as Big 12 members, including 0-3 at home. Mix in a 1-1 record in Big 12 Championship games and the Huskers are 1-7 against Texas since the league was formed heading into a Saturday showdown in Lincoln, Neb. That could mark the Huskers’ final opportunity to knock off Texas before Nebraska joins the Big Ten next season.

Suffice it to say, both of the Big 12’s undefeated newcomers at quarterback will be battling negative trends in series history Saturday. But both have shown abilities that suggest they might be the guy who can flip this year’s matchup in their team’s favor.

Weeden, who ranks fourth nationally in passing yards (322 per game), will face a Tech defense that is 114th nationally in pass defense (279.6 yards per game). Weeden threw for five touchdowns in Friday’s 54-28 victory over Louisiana-Lafayette, including three in a second-half rally from a 21-17 halftime deficit.

Oklahoma State coach Mike Gundy cited Weeden, a junior, as one of his “veteran guys” who showed “great leadership” while helping OSU rally to win its first road game this season. Although the challenge will be tougher in Lubbock, Gundy said Weeden — who has 18 touchdown passes and six interceptions — has the intangibles to help the Cowboys thrive in another hostile environment.

“There’s an advantage in being older. We all know that we’re different at 26 than we are at 18,” Gundy said. “In order to handle the pressures of being a quarterback and playing at this level, maturity is an advantage. Brandon ... has done a nice job. I’m excited about watching him develop and seeing what direction he can take our football team.”

Likewise, Nebraska coach Bo Pelini is curious to see how far Martinez, who won the starting job in fall drills, can carry the Cornhuskers. A dual threat, Martinez leads the nation in yards per carry (10.8) and is the leading rusher (737 yards) on a Nebraska team that ranks second nationally in rushing offense, at 337.6 yards per game and 7.8 yards per carry.

Nebraska will face a Texas defense that has surrendered a 100-yard rushing performance by an opposing player in consecutive losses to UCLA (34-12) and Oklahoma (28-20). Martinez got way more than that in Thursday’s 48-13 rout of Kansas State, rolling for 242 yards and four TDs.

After the victory, Nebraska tailback Roy Helu, Jr. — who ground out 110 yards against the Wildcats — said Martinez has been very proficient in making reads at the line of scrimmage, which has been “the key” to taking the Huskers’ option attack to an elite level. Pelini said Martinez, who joins Baylor’s Robert Griffin on the short list of candidates as the Big 12’s fastest quarterback, “creates some problems for defenses” because of his unique blend of skills.

An overlooked problem is his right arm. Martinez, a 60.9 percent passer, is not included among the NCAA’s passing efficiency statistics because he has not attempted the minimum of 15 passes per game to qualify. But he’s thrown for 660 yards and three touchdowns, including a 79-yard scoring strike to Kyler Reed against K-State.

With five starts, Weeden said he is “kind of settled in” to the pace of Big 12 football and the game has “kind of slowed down” for him in recent weeks. The same clearly is true for Martinez.

Don’t be surprised if either of these fresh faces on the Big 12 landscape finds himself with a 6-0 record as a college starter by Saturday night.

T Martinez has got to be considered the best QB in the Big 12 at the end of the year and if it wasn't for him being a Freshman, he should win the Heisman.