Kansas guard Angel Goodrich poses for a picture during the Jayhawks’ Media Day on Monday at Allen Fieldhouse. After rehabbing from surgeries to repair torn anterior cruciate ligaments in both knees, Goodrich is eager for the season to begin.

Kansas University point guard Angel Goodrich sat in her stool on the floor of Allen Fieldhouse, a big scar on each knee and an even bigger grin on her face.

The team, which has already started practicing, was ranked sixth in the preseason Big 12 poll. 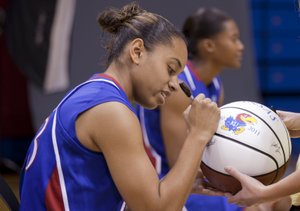 Kansas guard Angel Goodrich autographs a basketball as she and her teammates await interviews during Media Day on Monday in Allen Fieldhouse.

After missing her entire freshman season because of a torn anterior cruciate ligament in her left knee, Goodrich was off to a great start last year before suffering another ACL tear in January — this time in her right knee — which ended her season.

Now with three years of eligibility remaining and medical clearance for full participation, Goodrich is ecstatic about returning to the court.

“It feels great. It’s a wonderful feeling,” she said at the team’s Media Day on Monday. “I’ve missed it, and once I came back, I was like, ‘Wow.’ It’s just like a relief.”

The reaction from her teammates was more of the same.

“I’m very glad to see Angel back,” red-shirt freshman Tania Jackson said. “She’s all smiles, very vocal. She has so much confidence, you couldn’t even tell she had hurt her knee.”

“I told her the other day how excited I was when she actually played pickup with us. In pickup, (she) completely changed the tempo. It’s just fun to see her smiling and playing — it’s a big difference,” sophomore guard Monica Engelman said.

Others gushed about Goodrich, who led KU with 106 assists last year despite missing the final 18 games, because of her vision and natural passing ability.

“She distributes the ball well. She sees the floor well. You’ve kind of got to run with your hands up because you might not be expecting it sometimes,” senior guard Marisha Brown said. “But she’s a great point guard. She can definitely change the tempo.”

Goodrich said her knee felt “good,” and that dealing with her first knee injury helped her cope with facing her more recent setback.

With their playmaking point guard back in the fold, the Jayhawks — picked to finish sixth in the Big 12 in a recent coaches poll — feature a talented young group of players who have coach Bonnie Henrickson eager to get the season under way.

“Where we are right now, I’m absolutely excited with the four freshmen and the returners and the work they have put in this fall. It has been a great offseason for us,” Henrickson said to open her news conference.

Along with Goodrich running the offense, sophomores Carolyn Davis and Engelman likely will shoulder most of the offensive load.

Davis, who made the Big 12’s all-freshman team on the strength of last season’s averages of 10.2 points on 71.9 percent shooting, admitted that she experienced jitters as a freshman.

“I don’t know if you could tell, but, yeah, I was (nervous),” she said with a laugh. “It just comes down to at that moment, you have to put that all away and make the shot you know you can make.”

While Engelman said her focus was on grabbing more rebounds and being more physical, the 6-foot-3 Davis has other ideas.

“I just work on my quickness,” Davis said. “I’m trying to be quicker than a lot of the people I play against, so that’s what I’m working on.”

Davis and Engelman might be growing as players, but with five seniors from last year’s team gone — including standouts Danielle McCray and Sade Morris — the Jayhawks need their youngsters to develop into leaders as well.

Goodrich, Davis and Engelman were voted as this year’s team captains by their teammates this past weekend.

“All three I think are going to be very good leaders. They’ll all lead very differently, and I embrace the fact that I have to help them understand how to lead. But they all want to,” Henrickson said.

Throw in returning upperclassmen Krysten Boogaard and Aishah Sutherland, along with four freshmen and Jackson, and the Jayhawks feel they’re ready to shake off the lackluster end to last season.

“I can’t wait until the season starts,” Goodrich said.

All but two Jayhawk players were present at Media Day. Freshman guard Keena Mays was away because of a death in the family, and Henrickson announced at her news conference that senior forward Nicollette Smith is on a leave of absence for personal reasons.

Henrickson offered high praise for her incoming freshmen, saying they all have a “high basketball IQ,” which has made their learning curve “pretty good so far.”

• On Keena Mays: “She can put it on the floor and has vision like Angel does … she’s thrown a couple of passes that didn’t surprise me, because I’ve watched (her) play since she was very, very young, but may have surprised some of her teammates, possibly.”

• On Brooke JeIniker: “Probably been the most consistent of the freshmen … she brings us the much needed ability to knock down a three and space the defense.”

• On Diara Moore: “Defensively I think she can find a niche for herself and get on the ball and be a good defender.”

• On Carlicia “CeCe” Harper: “(She’s) shot it well from three, she’s made plays off the dribble.”

It would be great if this is the year our Lady Hawks start the season as a work in progress and continue that progress throughout the schedule.

Staying healthy and thriving in each other's successes may bring the rewards we all feel coach Henrickson has been aiming the program toward through thick and thin these past years.

High hopes for KU women bb since Hendrickson arrived. Several injuries to key players has hampered our goals however NIT appearences have been a good sign. They stay heathy and this will be a great year. RCJH!!!!!

Good luck, Angel. You've definitely proven that you're one tough individual. Looks like this year could be a terrific year for our Lady Jayhawks, best of luck to you and your teammates.

I'm excited as heck. Since my daughters became ballhawks 3 years ago we've been going to many games and these girls are going to be good...

Good luck, Angel. No knows what you have gone through to get back on the court. Many would have called it a career. Good luck, and God's speed.