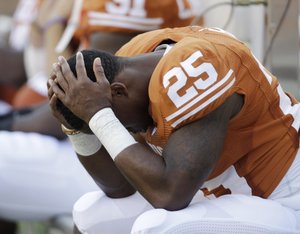 Texas’ Jeremy Hills buries his head during the final moments of the Longhorns’ 34-12 loss Saturday to UCLA in Austin, Texas, a setback that put a crimp in UT’s national title hopes.

The chances that Texas will return to the BCS championship game for a second straight year are greatly diminished, if not gone, after a humiliating rout at home.

That doesn’t mean the Longhorns are done in the Big 12.

What better way to shake off a 34-12 loss to UCLA than with a victory over archrival Oklahoma just seven days later?

“The only big games at Texas, (former) coach (Darrell) Royal told me, are the ones that you lose,” coach Mack Brown said. “We’ve lost ones before that got big. Everybody gets mad and everybody gets angry, and all we can do is go back to work.”

The annual Red River Rivalry game at the Cotton Bowl in Dallas will be lessened in stature this year after the Longhorns’ stunning loss highlighted a day of struggles by the Big 12’s powerhouses. The Sooners edged Cincinnati 31-29 and No. 6 Nebraska was unimpressive in a 17-3 win against South Dakota State of the Football Championship Subdivision.

That leaves serious questions about whether the Big 12 has a legitimate national title contender while two other conferences will have their best teams playing at center stage tonight: No. 1 Alabama hosts No. 7 Florida in the SEC, and No. 9 Stanford visits No. 4 Oregon in the Pac-10.

In these parts, it still doesn’t get much bigger than No. 8 Oklahoma vs. No. 21 Texas. The teams have combined to win the last six Big 12 championships, escalating tensions between rivals that have been playing for over a century.

“That just made it more intense, I think, and the fact that we’ve been in the national hunt — both of us over the years — also intensified it or at least brought it more attention nationally,” Sooners coach Bob Stoops said. “In the end, being in the same division has really made it even more important.”

All three of the North’s unbeaten teams — Nebraska, Missouri and Kansas State — are off this weekend, leaving the spotlight to shine on the South.

Texas already has a leg up on the rest of the South with its Week 3 win at Texas Tech, but last week’s loss did nothing but raise concerns.

“This isn’t my first fan panic,” Brown said. “The only thing we can do to get fans to calm down is win.”

Brown knows that well. After losing to Oklahoma five straight times to start the 2000s, the Longhorns have won four of the last five and at least have that momentum on their side in a series filled with streaks.

“When you start losing it, the fans get on you so hard that it puts so much pressure on you as a coach and your kids that it’s hard to get it turned back,” Brown said. “That’s all you hear because you’ve got great respect between the two universities and the game is big, and it’s really important. It’s a midseason game, so it’s really a hard game for everybody.

“I think that that’s probably what’s happened is that one group feels so much pressure because their fan base feels that pressure.”

Stoops, however, is quick to point out that the Sooners have won three of the last four Big 12 championships — with two of them coming in seasons when Oklahoma lost to Texas in Dallas.

“This game matters because it’s right now. Then after that, you’ve got to win them all to have the chance to be the Big 12 champion,” he said. “This game doesn’t do it.

“Sometimes I think the media, ’Oh, this is the only game that counts.’ Well, if you win this game and lose a bunch of others, it doesn’t amount to much.”