Kansas' Christian Matthews (12) goes up for a pass against Missouri's Kip Edwards (1). Kansas and Missouri met at Arrowhead Stadium Saturday for the 119th game in the rivalry series.

Beat like a drum: Tigers dismantle Kansas in finale 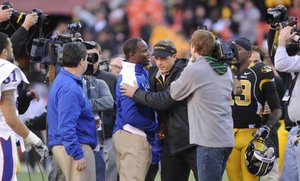 The Jayhawks lost to the Tigers in the Border Showdown, 35-7.

One of the hottest topics of late has been the future of Kansas University quarterback/receiver Kale Pick. Pick opened the season as the team’s starting QB and was benched in the fourth quarter of the season-opening loss to North Dakota State. From there, he never really found his way onto the field again until the final two weeks of the season, when he lined up at wide receiver.

Asked after Saturday’s loss if he planned to return to KU for his junior season, Pick said: “Um, I have to talk to the coaches and see what they have to say, see what they’re thinking for next year.”

If Pick chooses to leave Kansas for another Div. I program, he would have to sit out a year before being able to play again. He already sat out one season while red-shirting in 2008 at KU. However, if he chooses to transfer to a Div. II school, Pick would be eligible to play immediately.

Should Pick stick with Kansas, what position he would play? KU’s coaching staff continually said that the QB position was a work in progress. It remains that way heading into 2011.

“That’s something we’ve got to get figured out,” Pick said. “See what happens, see what the coaches think and who they want to go with.”

Would Pick be an option?

Last Tuesday, KU coach Turner Gill said he would wait to comment too much on the Border War rivalry until he had actually been through it. So, what did the first-year KU coach think of the storied showdown?

“It’s intense,” he said. “I felt excited, and I’m excited to come back here next year and play in this rivalry. Guys played hard on both sides of the ball. It’s a physical game.”

Sophomore Bradley McDougald started his second straight game at safety Saturday. And for the second game in a row, the former wide receiver was among the team leaders in tackles with five.

He also added an interception and looked comfortable in the secondary.

“Coaches did a great job all week making sure guys were going to be in the right position,” McDougald said. “We had a couple of their route patterns down, their route techniques down, which made it easier for me back there at safety.”

Last week, Gill pointed to 100-yard games from freshman running back James Sims as the common denominator in KU’s three victories this season. The idea, then, was for the Jayhawks to give Sims enough carries to reach that mark Saturday.

However, Sims and the KU offense came up short, as KU’s leading rusher finished with 82 yards on 21 carries against Mizzou.

Asked if he thought Sims received enough touches, Gill said: “Probably not. When you don’t have a lot of drives to get repetition in a game, then you aren’t going to be able to get the number of carries to a certain person that you would like. In this case, James Sims.”

For the season, Sims finished with 742 yards and nine touchdowns. His yardage total places him third on KU’s all-time freshman rushing list, and his nine TDs are the most by a freshman since June Henley recorded 13 in 1993.

KU turned in a season-best four sacks Saturday, the most since tallying five against Texas in 2009.

Senior Jake Laptad’s sack in the second half gave him 4.5 for the year and 21 for his career, which put him in second place on KU’s all-time list.

"Asked if he thought Sims received enough touches, Gill said: “Probably not. When you don’t have a lot of drives to get repetition in a game, then you aren’t going to be able to get the number of carries to a certain person that you would like. In this case, James Sims.” "

BS - Sands was used way too much in the second half. Even though he was able to get around the edge on a few plays, Sims could have done just as well. Hopefully next year Sims will have some added bulk so that the coaching staff will have confidence leaving him in the majority of the game. But he didn't get near enough time in the second half of the game.

Where does Bourbon fit in the equation?

He better be there because he is every bit as good as Sims.

It's a little concerning that it took this coaching staff until the end of the season to figure out that Sims was the best offensive weapon they had. It was obvious to most fans by the third game of the season. Let's hope they don't get so distracted with other guys next season, and play him almost exclusively in the back field.

As for Pick, I have a feeling he'll be transferring, and I can't say I blame him. He spent the entire off season winning the starting job, then he lost it in one poor game (where he got no support from his teammates, and his offensive coordinator did a very poor job of play calling that game.) He deserved another chance to show if he could play or not. It's not like the other two QB's set the world on fire. I've never seen anything quite like the unfair shake Pick got from the coaching staff.

I thought Torbush did another nice job of making adjustments as the game went on yesterday. I believe we have a solid defensive coordinator. I can't wait to see what he does once we recruit a little more speed to the defensive side of the ball. As for Long, I've been pretty underwhelmed by his coaching all season long. I realize he had no offensive line to work with, but he's shown a lack of feel for play calling, and some of his personnel decisions have been suspect (such as not using Sims more, and the quick yank of Pick, after awarding him the starting job. Also his failure to utilize McDougal more. McDougal looked like a star in the making under Mangino, and he just disappeared in the Long offense.)

Have a feeling there is going to be a mass exodus thus offseason.

So are you going to stand up and admit you were wrong when there isn't a "mass exodus"?

Wish there was a "like" button! 2 posters who are so obviously unhappy with life in general... Let the offseason begin and we'll see what happens!

If your comments were made by someone else I would probably disregard them, but since you have good credibility I'll give them a lot of merit. My feelings were always a little mixed about Pick in the first place as he didn't play football his senior year due to injuries, therefore he was recruited almost entirely because of his junior year of high school, and granted he did have a decent season then. He doesn't have the speed of Kerry Meier so wide receiver was a stretch for him anyway. Sorry your grandson's senior year didn't turn out the way he, or any Jayhawk fan, wanted. I know he is a terrific young man.

Thanks for your comment gchawk. My grandson, John Wilson had a very enjoyable 4 years at Kansas and he along with a lot of the other boys were disappointed this year. We all have disappointments in life but we have to keep looking at the bright side. The hit that John took Sat. could have broken his neck or back. So we are thankful there.

Can we throw in gill also? Remember pick was named the starter after a long qb competition. You would think gill and long might be able to evaluate the qb position correctly!

What would you do if you had three crappy quarterbacks? That's right, give the starting job to whoever seemed the least crappy at the moment... Face...

Keeping in mind we lost to a d2 team maybe d3 would be a better option for our players to transfer to.

Finally this douche admits to our team having crappy players...can you make a gourmet meal out of mostly Easy Mac? I'd like to see it.

My idea would be to let the coach head out. Please live the millions that the worst AD in Kansas history gave you. Boy did we ever get a raw deal with this new guy.

Worst AD in Kansas history? You must have a short memory...

"For the season, Sims finished with 742 yards and nine touchdowns. His yardage total places him third on KU’s all-time freshman rushing list, and his nine TDs are the most by a freshman since June Henley recorded 13 in 1993."

I said in a comment on September 26th that if Sims stays healthy, he would pass Henley to become KU's all time leading rusher.

Personally, I'm much more confident in that prediction now that the season is over. Sims has a great knack for finding tiny holes and has very good yards after contact. As Colin Cowpie... uh, eh-hem, pardon me... Coherd likes to say, he passed the eyeball test right away. And he had a solid Freshman season despite the below average blocking and no solid threats on the offensive end. Imagine if we added above average guys on the O-line along with a QB who is a true threat with the pass and WRs that can make big plays. Add that together, and Sims will explode.

I really like this kid. I hope he works hard in the off season... along with the coaches to get some serious help around him. Sims excelling means nothing but good things for Jayhawk football.

Whether KP got a fair shake or not is a moot point, in my opinion. He should transfer so he can play right away. I think he would be a pretty nice qb at a DII school. He is not a good DI qb and never will be. Are the two in front of him good DI qb's? Maybe not, but the depth chart is correct. The qb position is just one of many that is going to have to get much better immediately, or this program will be where it was when they hired Magino.

Pick was 11 for 13 in passing the first half of NDST game. Like all the games following the first game KU was out played in the 3rd quarter (that is poor coaching adjustments). Pick was benched at the beginning of the 4th quarter. Long has mentioned publicly he has never used a true dual-threat quarterback. After watching the NDSU play calling, that was evident. That was pretty much it for Pick bad luck with leg fracture which he tried to play on four weeks later during the A & M game, which showed toughness. It takes six to eight weeks for that injury to heal. Webb also got injuried twice. (shoulder against A & M and concussion against Missouri). We had four starting linemen returning that showed regression instead of progrogression throughout the season. As for receivers, they didn't exsist. Senior leadership sucked, especially from Wilson, who hasn't played with a crap for his career. His last two years really sucked.