A cooling tower caught fire just outside the Anschutz Sports Pavilion on the Kansas University campus on Tuesday, Nov. 23, 2010. 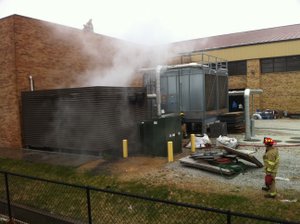 No major injuries were reported during a three-alarm fire that broke out Tuesday morning in a HVAC unit attached to one of Kansas University’s sports facilities.

At 10:39 a.m., a structure fire was reported at the southwest corner of the Anderson Family Strength and Conditioning Center.

Flames and heavy smoke were coming out of the building’s cooling tower, which is part of the heating, ventilating and air-conditioning system. Parts of the strength and conditioning center and all of the Anschutz Sports Pavilion, which is next door, were evacuated.

One KU employee was treated at the hospital for minor smoke inhalation and later released.

The complex houses weight rooms and an indoor track and artificial turf surface among other things, and it is just west of Allen Fieldhouse on Kansas University campus.

KU spokeswoman Jill Jess said no athletic events would be affected by the fire.

The inside of the buildings were not damaged, but light smoke was detected.

Fire crews were unable to determine the cause of the fire, Jess said. Cost estimates of the damage to the building’s cooling tower were not available.

Hilltop Child Development Center, which sits up the hill from the sports pavilion, was not affected by the fire.

Power to the building was restored later in the day.

May we assume that the game is still on for tonight?

Yes you may. Damage was confined to a cooling tower serving and adjacent to Anschutz. No damage to Allen Fieldhouse or any of its infrastructure.

Thank God nothing happened to AFH....

I am thinking Mizzery!

That bastard Quantrill has risen from the dead....but even he can't help Misery against Kansas, the Force of Good!!!!

It's going to take a lot more than that to put a halt in our home winning streak!!

Possibly the burned reports of Lew's connection to the ticket scandal, and Mark Mangino's tearful plea to keep his job.