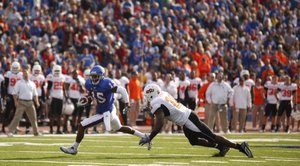 Highlights from the Kansas and Oklahoma State football game.

The Kansas Jayhawks hung with the Oklahoma State Cowboys early, before watching OSU run away in the second half. The final score was 48-14 in favor of the Cowboys.

After being rocked so many times this season by rapid fire, the Kansas University football team on Saturday suffered through a sluggish and methodical 48-14 beatdown by No. 12 Oklahoma State at Memorial Stadium.

The Cowboys required several plays to score on each drive, mixed the run and pass nicely throughout the game and also settled for a couple of field goals along the way.

Even the Memorial Stadium stands, which held an announced attendance of 39,261, emptied at a slower pace than they had in earlier home blowouts.

“I think we did a great job defensively of keeping it slow,” senior end Jake Laptad said. “Their offense is really fast-paced, and we were running in a different defensive line every four plays. We were trying to keep up, but they’re one of the best offenses in the league.”

Jeremy Smith scored on a five-yard TD run late in the third quarter. OSU followed with a blocked punt for a touchdown a few minutes later. And OSU quarterback Brandon Weeden (31-of-43 for 389 yards and three TDs) tossed two perfectly thrown fourth-quarter touchdown passes that helped him establish a new single-season record for total offense at OSU.

“We played pretty sound for three quarters,” said senior Chris Harris, who finished with 11 tackles. “But they’re the No. 1 offense in the country. If you keep giving them shots, they’re gonna score.”

In the end, though, KU fell off the pace.

“I thought in the first half we played pretty good football,” KU coach Turner Gill said. “We put ourselves in position to make plays, and our guys made plays both offensively and defensively.”

Once again, though, it was a different story after halftime. KU was outscored 14-0 in each of the final two quarters, a famine that pushed KU’s third-quarter points-against disadvantage to 90-10 in Big 12 play.

OSU racked up 597 yards of offense compared with 288 for KU. Those numbers included a 298-64 advantage in the second half that helped explain the outcome.

It’s not that KU didn’t have its chances in the second half. The KU defense opened the third quarter with a huge fourth-down stop inside OSU territory. Harris and Tyler Patmon stuffed OSU’s Kendall Hunter on fourth-and-one, and the stand gave the ball to the Jayhawks at the OSU 37, trailing just 20-14. Four plays later, however, a 47-yard Jacob Branstetter field-goal try was blocked, and the rout was on.

“That made a difference in the ballgame,” Gill said.

Asked why he chose to kick instead of going for it on fourth-and-three, Gill said: “I thought it would be advantageous for us to get three points. I felt good about where we were, as far as field position, and I thought to be there at 20-17 we (would have been) in pretty good shape.”

KU’s forced a missed field goal on the ensuing drive and gave the offense another chance. But on third-and-six from the KU 33, red-shirt freshman receiver Chris Omigie dropped a pass that would’ve led to a sure first down. OSU responded with a TD on the next drive and the punt block two drives later.

“It’s definitely been one of those types of seasons,” Harris said.

Omigie, who tallied three catches for 41 yards, was down on himself for the drop, saying he lost his concentration in the second half.

And, in college football, the better team usually wins. It happened again Saturday at Memorial Stadium, and, afterward, nobody was arguing.

“They’re good. They’re as good as there is around,” Gill said. “They’ve proven throughout this whole season that you might slow them down, but you’re not gonna totally stop ’em.”

There has been one play each week that had been the tipping point for the momentum to change a game: dropped passes, penalties on 3rd down, and not converting on 4th and 1.

I saw improvement again yesterday. Dropped passes were a killer, along with a blocked fieldgoal. OSU has a very potent offense, and I thought the Hawks played very tough until about 2:00 minutes left in the third quarter......a lot longer than most of us expected them to hang in there.

They are getting better, and that is what we are hoping to see. Now close out strong, win or lose.

And now, the game that all KU head coaches are faced with----like it or not----a measuring stick, if you will----the game against Mizzou. I not saying they have to win the game, but if it is a beatdown in the new Arrowhead. . . . .no pressure!

The Magino cupboard: 5-stars for excellent and one star for poor.

Kicker--2 stars for ability but 5 stars for guts. If we had 85 Jacob Branstetters we would win the B12 championship

Now for performance for the year by teams using grades A-F:

Coaching--D The effort to recruit and time spent spares them an F. Obviously we had inferior talent but the players did not seem to be coached "up" and all too frequently seem to be disorganized.

As much as I want this staff to succeed, it is hard to see this happening until year four. By then the enthusiasm for KU FB will have ebbed. I hope I am wrong. It will take the recruiting of quality players who are ready to play at a young age for KU FB to become relevant any sooner than that. By then the apathy may be so low that it won't make any difference how long this staff survives. Although we need players at all positions, the need for a stud QB is huge. Obviously, the chances of us grabbing such a QB seems totally unrealistic in the near future.

Forgot to mention the AD--His grade is a D.. Although Lew did wonders for raising sorely needed cash for the athletic department and improving the FB facilities, he did a poor job at over-sight, demoralized over half of the Jayhawk nation, and left the athletic department in shambles. Thank the lord for Bill Self, who continues to hold himself above the fray. Maybe Self should be the AD.

The reality of all this is if we would have used Opurum on the goaline 4th and 1 we would have scored and everybody knows this. Except the coach of course cuz he was more worried about inserting about 20 other people into other positions. The rest is history. Coach- If your wondering about Opurum pull up his youtube highlight video when he was in highschool and ran all over texas. He wasnt the 3rd highest ranked fullback out of high school by rivals because he sucked at running the ball. He was rercruited by Kansas, Nebraska, Texas Tech, Florida, Purdue and Notre Dame and had visits to Notre Dame, Purdue and Kansas and at the end narrowed his choices down to Ku and Notre Dame. Well Toben maybe you should have went to Notre Dame. God on the big list isnt there 5 other teams that you would rather play for than the losing hawks that put you on the other side of the ball. So far the only player that the moving around has ever been successfull doing this was when we switched Kerry Meier.

Nick Reid comes to mind. Talib to Offense? Gordon to defense? I believe AC was recruited to play defense. Zach Dyer to safety (j/k, but the kid did make a hell of a lot of tackles).

Remember this guy and when he scored all these Td's. Enjoy the bigboy interviews throughout the video.

Coach just do it. We have a million other dudes that can play defense. If your telling me that Sims and Sands are better you are only fooling yourself.

I agree with the majority of your points, and believe some of our short yardage results throughout the season may have ended differently with TO pounding the rock.

This was the biggest personnel decision of this season, and with all things considered, it seems Toben was moved based on what HCTG believed would be best for his team this season. With so much young "quality" (unproven) depth in the backfield, I too believe the best move for this years team was to place TO on the defense. Are there some sacrifices that had to be made especially in the short term (losing a power runner on short yardage) yes, but the overall gain for the team over the course of the season, I believe, was greater.

Only time will tell if this move has "worked". Much of this will depend on how good our RB's prove to be in the future (Sims, Bourbon, Rell Lewis, Darian Miller). Needless to say, KU fans will have a lot to look forward to this Spring!

[Asked why he chose to kick instead of going for it on fourth-and-three, Gill said: “I thought it would be advantageous for us to get three points."]

Where was this same wisdom at 4th & Goal, 14-17? ...after we had just run a half dozen short run plays with no gain? That was a real momentum killer. While the students in the stands and the OSU fans were all for it, I heard a lot of people screaming "Noooooooo!".

I was one of them.

Hope next year is better. This one was rough and not that much fun. I can't imagine how hard it's been for the players.

Sorry, but at this stage of the season the problem is coaching! My opinion is plenty of talent; and the incoming group has/will have plenty of talent. Gill is a great recruiter!

Look at special teams. Getting a punt blocked this late in the season is ample evidence to me of lousy coaching! No justification I can see.

Offensive line. Put in a replacement for an injured guard at the two foot line. The last four words he should have heard are "Don't get a penalty". So we wasted 4 downs at the 6 yard line. Way too many calls against the offensive line. Lousy coaching.

And, by the way, who is counting their offensive eligible receivers. No one I can find! And we have 4 guys standing around an open receiver who makes the play! Can any of our coverage guys cover a simple receiver. Damn few.

The personalities of the coaches may be easy to get along with, but they are inadequate, or damn poor coaches! Keep Gill. Replace special teams and offensive line -- and maybe the defensive guy. They should be doing a lot better with the players we already have on the field!

Guys! Seriously?! You watched that game and thought we "had the talent" to compete? Fellas, the talent gap is HUGE. It's a gaping canyon. OSU was so much more athletic (power, speed, size, quickness, explosiveness) it looked like they were just playing xBox against us.

I will say that they have a good quarterback. He should be good as he has had 7 more years to practice and get more years experience than most of our quarterbacks. Their receiver #81 has a lot of talent especially on the Come Back pass plays. Our coaches don't seem to know what a Come Back pass is. It is almost impossible to defend

KU -- don't know what you were watching --- but it can't have been talent. Great talent with poor coaching may look inadequate. But it seems to me obvious that some of our guys have superior talent! Look at 32, 39, even our defensive ends. We haven't had a serious gap in talent for 5 years!