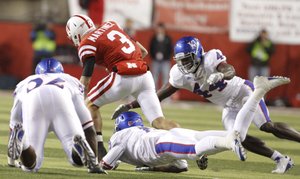 Lincoln, Neb. — From the opening-week loss to North Dakota State to Saturday night’s 20-3 setback to Nebraska, Toben Opurum’s growth has mirrored that of Turner Gill’s staff. Nobody’s doing backflips, but you have to admit it’s getting better, a little better all the time.

Opurum, still learning his new position, linebacker, watched the season-opener from the sideline, silently wondering whether he could have won the game his team lost, 6-3, had he been allowed to carry the football.

The linebacker experiment gave way to a trial at defensive end, where he has shown plenty of promise. Opurum twice got to quarterback Taylor Martinez and batted his passes to the ground Saturday, looking a bit like a shot-blocker protecting the lane.

He still doesn’t look completely like a lineman, preferring a stand-up technique to the three-point stance. And he still doesn’t sound convinced defensive end will be his permanent home. Who could blame him? It’s all happened so quickly.

He was asked: Are you sold that defensive end is the best position for you?

That’s what he does every week. He’s a winner. He’s an athlete. And if he can convince himself defensive end is the right spot for him, Kansas will be better for it. Opurum and red-shirt freshman nickelback Tyler Patmon have emerged as the best playmakers on the defense. In the previous week’s come-from-behind victory against Colorado, they teamed on a touchdown, Opurum forcing a fumble, Patmon returning it all ... the ... way. Patmon intercepted a pass against the Cornhuskers.

In losing to Nebraska, Kansas (3-7 overall, 1-5 in Big 12 play) made official what has been evident since the season’s opening week. It’s not going bowling.

“It’s been a tough road for us,” Opurum said. “We have an entire new scheme with a new coaching staff and new faces all over the offense and defense, so things really haven’t been easy for us, but I think we’re improving each week as a team. We have a long way to go, but we have to take small steps to get there.”

“They’re still trying to figure out personnel, who works the best together, who really connects and has the chemistry to execute and make plays,” Opurum said.

He took no satisfaction in the defense, consistently having to work with bad field position, making it tough for Nebraska to dominate the way it had so often this season with a powerful running game.

“When plays are there to be made, we have to make them,” Opurum said. “We can’t just have balls on the ground and balls in the air and us not recovering them. We’ve got to be able to make plays.”

The defense made more plays than the offense did.

The longest uninterrupted series in college football ended at 105, but you could have stumped the Kansas University offense on that piece of sports trivia. That unit could have sworn it ended at 104 years in a row. Kansas had just five first downs.

Nebraska’s Memorial Stadium is a great place to watch a football game. Locked to their seats for the duration, the fans’ attention is trained on the field. They all wear red, and they’ve seen so much winning tradition through the decades. But this was not an entertaining sendoff.

Heading into it, it seemed so sad that something that lasted so long had to come to an end, but after such a boring game that must have infuriated the pay-per-view TV customers, maybe it ended a year too late.

Nice article Keegan! I enjoyed it. It will be interesting to see how Toben progresses into next season.

This guy is clearly our best athlete on the field. You have to wonder what if he was still running the rock. And TO needs to question it also if he still has dreams of playing on Sunday. He's too small and so far behind one the learning curve at the position to have any hopes of making it in the league at de.

You're absolutely right. As a matter of fact, I think we should all just commit suicide rather than watch this storied football program with multiple national championships and Heisman Trophy winners be destroyed by some moron from a two-bit basketball school like Nebraska. He has no idea what he's doing.

Dude, your sad-sack negativity got old a L O N G time ago. You're not on the band wagon. We Get It.

Actually Toben should be very happy, he has a way, way, way,way better chance at a NFL career at defensive end or linebacker than running back. Plain a simple, very good speed for defense but not enough for running back. Still has plenty of time to learn defense if he dedicates himself

I concur, Tical. This Kid could make a living being a hybrid end/ backer... and they tend to have longer careers than Runningbacks do. Toben's got the gift, he's an amazing athlete, and he has solid instincts. given two more years he could be an All american if he sticks with it.

TO will be moved back to outside linebacker next year if they can get someone else take his place at DE. That will be the position he really excells at and give him a shot at the next level. We have a couple of RS freshmen DE now playing some and a couple that redshirted this year, that could fill that role.

There are also rumblings that HCTG and his staff are going hard after some JUCO defensive linemen, so one of them might also help right away next year. I hope they also get the big qb at JUCO in Iowa.

Opurum was great last night at DE. He does not have the speed to be a tailback at the college level. So far his best play has come at DE.

I think there is a reason that KU was the only school that recuited Toben as a RB. I think all others offered him as a FB or Athlete. He reminds me a lot of Kamerion Wimberly from Wichita Northwest. He played QB/RB in high school, DE at Florida State and was drafted to play linebacker in the NFL. Lots of similarities.

Not sure TO will be wearing blue next year, especially if m-gino gets the colorado or minnie-ha-ha gig.

I don't agree with this. I know lots of people repeat this mantra in the hopes that it is a valid excuse, but it's not.

"“It’s been a tough road for us,” Opurum said. “We have an entire new scheme with a new coaching staff and new faces all over the offense and defense, so things really haven’t been easy for us"

It hasn't been easy for KU's next opponent either, lol. OSU has a new offensive coordinator who brought in an entirely new scheme taught to an almost entirely new group of starters.......and the result has been one of the top offenses in the country.

That all may be true but I don't think either of your comments are terribly relevant to the situation at Kansas. If Kansas had the same QB, Running back, WR combo that OSU has, we'd be one of the top offenses in the country, too (See: The Reesing/Meier/Briscoe years). Regardless of the schemes. Coaching matters, but coaching All-American caliber talent at all skill positions sure helps. Secondly, it may very well be true that 68% of coaches improved their team's records, but that list mostly includes teams that fired their coaches for losing too many games. That wasn't the case for Kansas. I didn't click your link because I'm at work and it's blocked here, so maybe it addresses that. But that's a totally skewed stat and doesn't apply to KU at all. For all we know, that list includes coaches that are "improving" from 2 wins to 3. Coach Gill would have had to have a .500 record to improve this team. Comparing Gill's inability to win 6 games to other coaches that only had to win 3 or 4 games is completely irrelevant, and quite frankly is just nit-picky.

Where is this 'making strides' business? Just because TO says it? What else is he supposed to say?

Funny how after the same game there can be two articles from the same publication that state how KU's offense sputters and goes nowhere, then we get Keegan suggesting the team is making strides...yet there's little evidence - on the field anyway - to support such a claim. What should we look at?

I do appreciate TO and commend him for being a class-act during this...what-have-you.

I don't know about the whole group making strides, but if TO is behind the learning curve at DE, he sure makes being behind look pretty dang good.

On the other hand, Saturday showed, once again, that our defense has less holes in it than our offense, and still makes one wonder if he would be more useful there.

With James Sims running the ball like he has this year, I'm not sure Toben would have been such a significant upgrade on offense that he would have changed our fortunes, unless he was going to move to FB or TE.