Columbia, Mo. — It has been a tough couple of weeks for Blaine Gabbert. The Missouri quarterback insists he’s fine and says support from the coaching staff has not wavered. 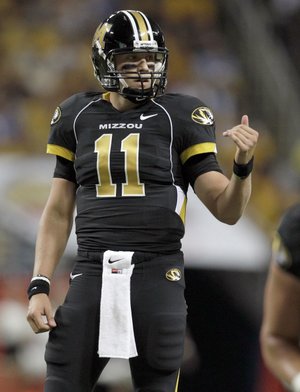 Missouri quarterback Blaine Gabbert gestures during the second quarter of MU’s against Illinois in St. Louis.

Gabbert had a career-worst 95 yards passing last week in a 24-17 loss at Texas Tech, the No. 20 Tigers’ second straight setback following a 7-0 start. He said his troubles had nothing to do with the previous game, when he was sacked six times and appeared rattled at Nebraska

He blamed reporters for wanting him benched in favor of freshman James Franklin.

“I think you guys are the ones that wanted me pulled,” Gabbert said this week. “Everyone on my team wanted me out there and I wanted to be out there. You guys’ opinions on who should get yanked really doesn’t matter to us at all.”

Missouri’s once prolific offense is sinking fast, totaling 34 points the last two games, and is a pedestrian seventh in the Big 12 in total offense at 407.8 yards per game. Gabbert has only 12 touchdown passes in nine games.

Last year, his first as the starter, Gabbert had 24 touchdown passes in 13 games.

Coach Gary Pinkel won’t pin the blame for the two-week tumble on his junior quarterback, saying it was more a case of the entire offense being “out of sync.”

“There are a lot of variables out there and he’s not perfect,” Pinkel said. “You look at the stats in the NFL and there’s some great players, but they aren’t going to have a perfect game every week.”

Franklin also had offers from Nebraska, Oregon, Oklahoma State, TCU and Kansas State. He’s appeared in six games, going 11 for 14 for 106 yards and a touchdown, and has run for two scores.

In small doses, the speedy Franklin has been impressive.

“The easiest spot to critique on the field, everyone’s favorite player on the field, is the backup quarterback,” Pinkel said. “We all know that. That doesn’t affect me in any way. I’m going to do what I think is right.”

Gabbert said there’s plenty of blame to go around.

“It’s a combination of things and we just have to get clicking,” he said. “We have to run better routes, we have to throw the ball better and we have to block better. It’s a multitude of reasons why we weren’t executing in that game.”

“It’s either protection, routes, catching, throwing, timing, all of the above, and we just have to work through it,” Pinkel said. “We have to execute better and we’ll do that by executing better in practice.”

The Tigers have struggled lately against defenses daring them to run by dropping seven or eight defenders off the line. Nebraska was disruptive with a three-man rush much of the game, forcing Gabbert into a career-high 22 rushing attempts.

Missouri took a quick 14-0 lead on a pair of long runs Saturday, but had only three first downs and abandoned the run in a scoreless second half.

Michael Egnew, who entered the game ranked sixth in the nation with 63 receptions, had only three catches for 16 yards.

“It’s not anybody’s fault,” Gabbert said. “It’s a combination of things and we just have to get things clicking.”