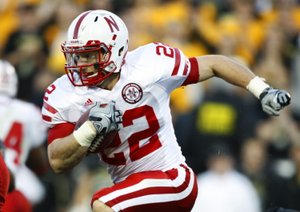 Nebraska running back Rex Burkhead carries against Colorado in this file photo from Nov. 27, 2009.

“It’s fun being back there. You kind of feel like the leader of the team at the time, I guess you could say,” Burkhead said. “It feels like playing pickup football as the quarterback. It’s fun having the ball in your hands like that.”

Burkhead ran for a career-high 129 yards and two touchdowns in the 31-30 overtime win over the Cyclones. About three-fourths of his 20 carries came on runs out of the wildcat, a single-wing formation with the snap going directly to a running back lined up in a shotgun position. The player then has the option to hand off, run or pass.

“To be able to line up and do all that, you have to have an understanding of what you’re trying to accomplish and be able to take charge,” coach Bo Pelini said Tuesday. “Those are all things that are strengths of Rex. He’s confident, he’s a take-charge guy. I think he fits that role real well.”

The Cornhuskers ran Burkhead out of the wildcat for the first time in last year’s Holiday Bowl win over Arizona. They didn’t use the formation again until the Iowa State game.

Cody Green started at quarterback because of injuries to Taylor Martinez and Zac Lee. Offensive coordinator Shawn Watson said he put Burkhead in the wildcat as a way to minimize the risk of injury to Green.

Martinez is expected to play against Kansas on Saturday. If Martinez is fully recovered from his right ankle sprain, Watson said, there’ll be no need for the wildcat.

“Taylor’s our most explosive player. You’d rather have him making those reads,” Watson said.

If Watson ever wants to use more wildcat, Burkhead will be happy to oblige.

He ran six times for 52 yards out of the wildcat during a 12-play, 79-yard drive that produced Nebraska’s first touchdown against the Cyclones. He also took a direct snap and ran 2 yards for a 24-10 lead in the third quarter. That play ended with linebacker A.J. Klein grabbing Burkhead’s facemask in the pile and twisting his neck.

No penalty was called on Klein. Instead, Nebraska fullback Tyler Legate was called for unsportsmanlike conduct for trying to push Klein off Burkhead.

“That’s Legate — he’s like another brother to me,” Burkhead said. “It’s nice to know your teammates have your back in situations like that.”

Burkhead is revered by his teammates, who voted him to the team’s Unity Council in only his second year in the program. The council helps the coaching staff establish team policies and is usually dominated by juniors and seniors.

“He’s not a rah-rah guy. He just brings it every day,” Pelini said. “You have the kind of work ethic that he does, and you do things right on the field, off the field, and really embody all the things that you want your program to represent. I think he represents all those things. The guys recognize that. It draws respect very quickly for a guy like that.”

Burkhead has been the third option as a ball carrier this season, behind Martinez and Roy Helu Jr. He’s rushed for 570 yards and scored five touchdowns, and he’s caught nine balls for 109 yards.

Until last week, his most talked-about play was one he didn’t make — a sure touchdown pass he dropped along the sideline against Texas, the team’s only loss. In the Oct. 30 game against Missouri, he carried just twice for 4 yards as Helu set a school record with 307 yards.

When it was time for the wildcat, Burkhead was ready. Receiver Brandon Kinnie said that after the wildcat’s success in the Holiday Bowl, he was surprised the formation didn’t reappear earlier in the season.

“Rex is so professional at it,” Kinnie said.

Burkhead was an ideal candidate. He played quarterback his sophomore year at Plano (Texas) High, running for 1,000 yards and passing for 600. He was a full-time running back his last two years of high school.

He said there are a number of pass plays designed for him in the Huskers’ repertoire.

“Hopefully,” he said, “the arm is still there.”

“He’s not John Elway, but he’s more than adequate at doing it,” Watson said.

I'm sure there are reasons for publishing articles about other Big 12 schools, but I don't understand them. This is the fourth or fifth article in a couple weeks about another Big 12 team and one of their obscure players. Last week, we got an injury report on Martinez before their game with ... Iowa State. At that time, who cared? In this case, it's about a guy who probably won't have a carry against KU. The article didn't make any connection with this weeks game against KU. This article belongs on the back page of the Lincoln Journal Star, not the LJW.

Seriously LJW, if you're gonna publish an article about an obsure player, why wouldn't you pick one of ours?

He's a twisted ankle away from being the focal point of the opponent's offense. Seems kinda significant to me.

Thanks for the article LJW.

I suppose this article may have some relevancy, however all the others didn't. Besides that, it is just a copy from the AP. Nice cut and paste LJW.