Boulder, Colo. — The University of Colorado will pay coach Dan Hawkins around $2 million to go away. His replacement might not get that much to fix the Buffaloes’ broken football program. 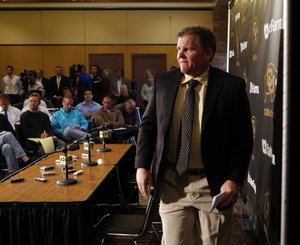 Dan Hawkins leaves a news conference Tuesday at the University of Colorado in Boulder, Colo., during which athletic director Mike Bohn announced that Hawkins had been relieved of his duties as head football coach.

Athletic director Mike Bohn said the school’s financial constraints means he won’t be able to pursue just anyone to be the next coach at Colorado because the higher profile names earn about $4 million annually, way out of the Buffs’ price range.

“It’s really not a level playing field of the haves in the Big 12 or the haves in the Pac-12,” Bohn said Tuesday at a news conference to announce the dismissal of Hawkins. “We’re not a $4-million institution. Would I like to believe we could get there some day? Sure.

“If we can emerge from not being dead last in the Pac-12 Conference as far as number of donors and amount of money raised — that’s a challenge for us.”

Bohn fired Hawkins on Tuesday, three days after the biggest meltdown in school history put a cap on his five failed seasons with the Buffaloes. Longtime assistant Brian Cabral will serve as interim coach for the final three games of the season, beginning Saturday against Iowa State.

Bohn said the search for a new coach would begin immediately.

However, Bohn may not be able to set his sights on the upper echelon, especially given Hawkins’ buyout and the prohibitive cost of luring a quality coach.

“It is going to limit our pool,” Bohn said.

At 70 years old, former CU coach Bill McCartney has publicly expressed an interest in coaching again and remains a “viable candidate,” Bohn said. McCartney led the Buffaloes to their only national title in 1990. But he’s been out of football since 1994.

Hawkins was hailed as a “home run” hire by Bohn in 2006 after going 53-11 at Boise State. Yet he never had a winning season in Boulder, going 19-39 and losing his last 17 games outside of Colorado.

The final straw came Saturday when Colorado blew a 28-point lead at Kansas as the Jayhawks scored 35 points over the final 11 minutes for a stunning 52-45 win. It was the biggest collapse in the 121-year-old program’s history.

Dressed in Colorado colors Tuesday, Hawkins stepped up to the podium and spoke for nearly 13 minutes, ending his speech with “Go Buffs.”

He didn’t take any questions from the media.

“I know it’s been a tough time for every Buff faithful. Hopefully, we can get those things remedied,” Hawkins said. “I really hope the negativity that might surround me doesn’t surround them. They don’t deserve that.”

Quarterback Cody Hawkins, the coach’s son, was among the seniors who addressed the media, saying he found out Sunday night.

“I had a little time to deal with it,” Cody Hawkins said. “College football is a business. There are a lot of great guys in this business who kind of get put out on the street.”

Pretty much a no brainer. Only the second time ever that a coach at a BCS school lost to Turner Gill. I would of made the same call.

Fabio Why dion't you coach against him and he can make it 3. Oh I forgot your just all mouth.

would HAVE made the same call.

sorry, I'm usually not the grammar police, but your criticism of the coaching staff draws my ire.

“If we can emerge from not being dead last in the Pac-12 Conference as far as number of donors and amount of money raised — that’s a challenge for us.”. Whaaaaaa sounds like a YOU problem! Also note to the clowns that are considering this guy for our spot.

So sad, too bad---you knew it was going to happen.

Too bad CU is leaving for the whack-12. They have the makings of doormat for a while. They can't afford a big name coach and their best option is someone who hasn't coached in 16 years.

Haves? Like the pie was split in half and I got both halves?

Or is it being used as a noun similar to how "eats" can be (I am hungry, give me some eats)? If so, it might be the first time I have ever seen it used like that.

Maybe you're just kidding that you didn't know what he meant, but he was using only the "have" portion of the expression "haves and have-nots".

Gill will be at KU miniumum of 3 years; mark it down. His contract is an iron clad one 5 years at 10 million.